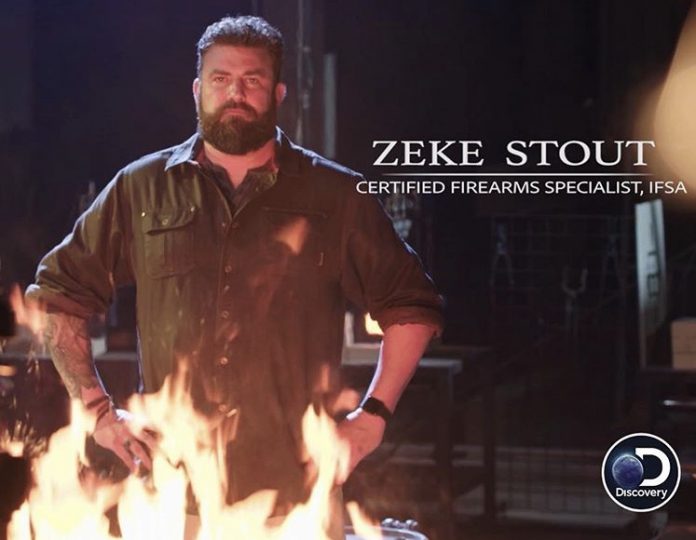 That blog title is a fair question.  If you meet me out and about you might see the 6’7”, full sleeved, bearded, shaggy haired Sasquatch and think im a washed up high school basketball player that …….errrrr….wait part of that is right.  However for the last 8 years of my life I have been working in the firearms industry either in the media side or the business side, and it has been the greatest experience.

So why read about firearms related subject matter from this guy?   I will answer that in detail at the end of this article.  Lets start with where Im from.  I was born in San Antonio, TX and hopped around the state  and New Orleans for a year until my father’s job landed us in Sewanee, TN.   Born in Texas and raised in Tennessee, those are some firearms friendly environments.  The urban legends of those states giving you a lever action rifle when you come out of the womb may or may not be true.

If I go back to my earliest experience with a firearm It would be out in the Texas hill country where a friend of my parents took me out rabbit hunting for the first time.  I wish I remembered the rifle but I am fairly sure it was a lever action rifle of some sort.  Most likely a 22lr because if I recall I was only about 5 or 6 at the time.   I will never forget that first harvest and it was on my first shot after a few practice rounds at make shift targets.  The bug had bit and it wasn’t letting go.

I spend a short time in the Boy Scouts when we moved to Tennessee and the fascination for firearms and archery started to grow there.  I went through middle school in a small area of Franklin County where we learned hunters safety and shot shotguns with our physical education classes.  I also learned a little about Vietnam era weapons from my father, an Air Force veteran.

Then that whole growing like a weed thing happened and I discovered I could take this orange bouncy ball and throw it through a metal hoop wearing thick fishnet stockings.   Basketball took over my life from my junior year until my mid twenties.   I never hunted went plinking or even held a gun during this time.

Then when I was working at a health food store paying my way through college (bball didn’t pan out), my boss sold me a Lorcen 380.  Yep …..that Lorcen 380.  The 380 that was somewhat of a ppk knock off.  I would take that thing out every day to the field behind the farmhouse I was living at with my first wife and “pow, pow, click……”. I would fix the jam, stove pipe, double feed, light primer strike (yeah it did em all) and feel all special and back to “pow, pow, click…..”  That thing was the malfunction king but I still loved it.  Looking back on it I face palm every time I think of it.   Unfortunately the internet wasn’t what it is now or I would have gone deep down the rabbit hole of “getting into” firearms.

That same year, around 20 years old, I went deer hunting for the first time and was hooked on that too though I missed the shot on the first and only buck I would see for 20 plus years.  That will be another story for another post though.  Harvested my first doe a few years after and haven’t looked back.

Then the moment I got sucked in deep.  The internet was full of info, YouTube videos were the wild west without any weird gun rules, and podcasts were starting to hit their stride.  I was the Chief Administrative officer for a conglomerate of businesses in Nashville, TN and I was charged with opening a location in a rougher area so I went to a gun show, I had sold the Lorcen long before, and purchased a Taurus 357 magnum revolver.  Dont ask which one because I don’t remember and flipped it for my first Glock.

After this purchase I went and got my carry permit and every day on my hour drive to that location I would listen to tactical training podcasts, new gun release podcasts, and really anything the firearms radio network had to offer.   While I would be doing paperwork I would have Hickok45 orating all the great information about different guns to me through the computer speakers.  One day there was even this security installer guy who worked on our system and he heard my computer and we started chatting it up about guns and I was shocked at how much I had learned and was able to go back and forth with.  Come to find out this guy was 22plinkster and we had been high school basketball rivals.  That is another post for another day.  This introduction is giving me some great ideas for your reading pleasure later.

One drive back to the house I called my buddy Marty “lefthand” Holder and we talked guns the whole hour and at the end of the conversation I said “man, we need to do a podcast together” To which he responded “what the fuck is a podcast” and the rest is history.  Talking Lead was born.  A couple of the businesses the company I worked for owned was two Latin radio stations.  I reached out to the owner about starting a podcast in the studios after hours and he gave the green light.   So yes, Talking Lead, was born in a Mexican radio station.   After our 4th episode which had Hickok45 as our guest, I looked at our downloads and we were being downloaded in 117 countries.    One of our sponsors at the time was an online gunsmithing college (which I will not name because I am a big competitor of theirs now) and I sent them my resume because my passion for the gun industry had grown and I wanted to work in the business side.  They hired me on as their chair and I worked my way to being the Executive Vice President of product and positioning.  In this role I fostered a great deal of relationships with major manufacturers in the gun biz.   I also had a radio show and podcast called Projectile Dysfunction that I started with my good friend Vanessa Mandrell Boyer.   It was a fun, hanging with your friends in a cabin somewhere kind of show that was slightly irreverent but our guests really opened up about guns, hunting, and anything that came to mind.  Then Discovery Channel came a knocking.

I received a Linkedin message of all places asking if I wanted to audition for a weapons building tv show on a major network.  They wanted me to be the gun judge for the show.  I never thought it would happen so I said “sure, why the hell not”.  The first audition was via Skype and I nailed it because well I didn’t care and never thought this would get made.  Then they found out about my radio/podcast/YouTube work and asked me to Audition for the host.  Still not thinking it would ever happen.  A couple of months later I received a call from Matador production company and found out it was for the Discovery Channel and would be a show called Master of Arms.  They flew me out to LA the next day and we started filming a sizzle reel.  About three hours into filming I said “hey I don’t mean to be rude but is this a normal audition process?”.  The producer shook his head, dropped the script, looked at me, and said “Audition?!? Dude your the host of the show!”  I was in shock and elated.   6 months later we were filming the show.

I am now the Chief Marketing Officer, Director and part owner of MGS trade school, formerly Modern Gun School.   We are wanting to make our school a resource for the industry not just for the quality students we graduate but for many other educational resources.

So back to the why read my blog posts question.  Im really not sure why you would choose that.  I don’t have any “operator” experience, though I have trained with a great deal of them.  Im not a top tier competitive shooter, though I have competed and even won a steel challenge.  I am a Certified Firearms Specialist through IFSA and just a guy that has put a lot of hard work into this community and have a great deal of passion for it.  In no way am I a master of the english language but I will just be me, which will be goofy at times, crass at times, but I will always shoot you straight on what I write.   I hope you enjoy this new journey Im on as I share stories from the field and give an honest opinion here and there about products.   Thanks for reading.