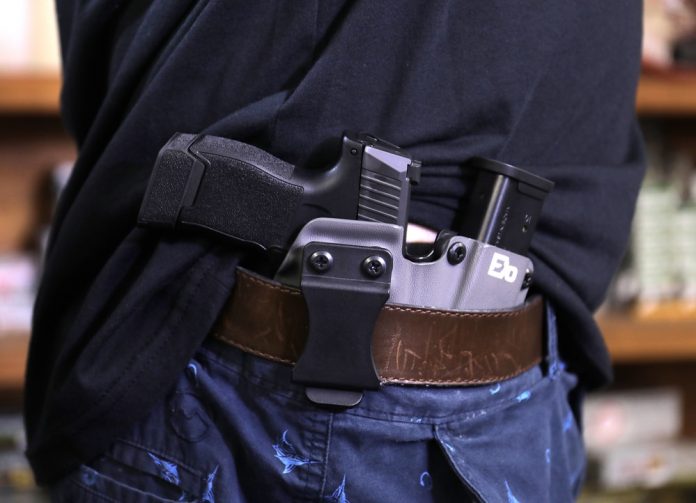 What two things go great together in Texas? You might be thinking cowboys and rodeos but, in this case, it’s trucks and guns. Meet Chris Moss, owner of Hill Country Truck Store and Firearms in Canyon Lake, Texas.

But he isn’t just the owner, he’s also a member, so to speak. He explained he picked a Sig Sauer P365 as his every day carry because of the capacity. The compact pistol comes with two 10-round magazines from the factory. And now that Sig offers a new 12 round mag, Moss said he thinks you just can’t beat having the that kind of capacity in a concealed carry gun “It has a very crisp trigger pull with a reset, has minimal recoil, and as a compact 9-millimeter,” he said. “I appreciate the gun’s sleek design, and the size is perfect for every day carry.”

Moss said he likes to keep things simple, so what he carries and what he has in his home for self-defense takes the same round. “If I’m ever in a situation where I’m scrambling for ammo it’s always going to be 9mm,” he said, naming Hornady’s Critical Defense as his favorite. “It’s 115 grains of reliable, threat stopping ammunition.”

Prior to carrying the Sig, Moss leaned toward the popular Heckler & Koch VP9 SK. “I am a huge (Heckler & Koch) fan but when Sig came out with the 12-round magazine, I switched saying ‘you just can’t beat that for the money,’” he said.

Moss is currently trying out a new holster, an Exo strike force style, that carries an additional magazine.

“If ya’ll feel like having fun and exploring what we’ve put together at my place, (also known as the “Redneck Toys R Us”) look us up and come on by,” he said.