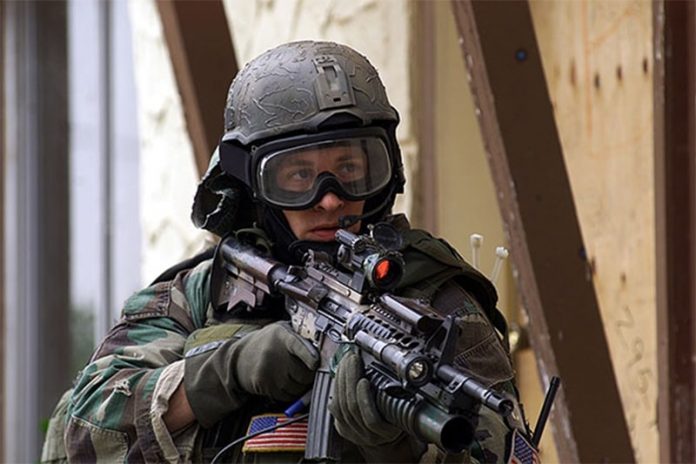 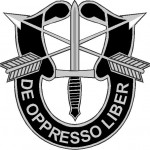 When we joined SF, while there was plenty of access to weapons that were heavier/more specialized / foreign, what an ODA carried was 12 M16A1 rifles (if we were fortunate enough to have 12 guys and zero empty slots, which happened… let’s just say, rarely). Soon, they gave us two M203s so we didn’t have to keep bumming M79s that Big Green wanted to get rid of.

Since then, the trend has been to push more and heavier weapons down to team level, giving the team increasing mission-driven options.

By the start of Afghanistan, we had SOPMOD I M4A1s, two of them w/203s per ODA, 7.62mm (M24) and 12.7mm (M82A1) sniper rifles, and had just gotten M249 SAWs. We borrowed everything else or bought it out of theater-specific money: AT weapons, a full suite of suppressors, etc. (Suppressors were part of SOPMOD I but ours got stuck in the pipeline and we got 2/team after deployment).

We had claymores and toe-poppers, and in 2003 had to turn them in because some drone in the foreign service had made an unwise promise to the ghost of the least consequential Briton in history, with the possible exception of Boy George, to wit, Princess Diana.

Demolitions have become more urban-centric lately. Your average SF demo man can rig a door to blow in two seconds flat, but send him into a forest to blow down trees for an abatis, and you’ll see him sneaking peeks at reference material.

With the evolution of the war, the weapons evolved rapidly with many more versions of precision rifle appearing, the Mk17 SCAR with several barrel lengths, and variants on the M4 / Mk18. We finally got M240s, M2HBs and Mk 19s of our own, rather than borrowed from Big Green. And bigger weapons yet began to ride our vehicles, notably M134 Miniguns and some SOF-specific weapons.

Where We Are Now

Pistols are a special purchase of the Glock 19, Gen 3, with the MOS slide and the Docter optic as previously used atop some SOF ACOGS. Not all teams in all groups mount the optic, but if the loggies have done their job, they have them available.

For what it’s worth, the Dillon-made Miniguns are preferred over the original GE ones because they’re easier to handle — which is relative; it’s a very difficult and intensive weapon to maintain. “The way that GE attaches the backplate, it feels like it’s trying to rotate in your hands” said one guy who attended a maintenance school which was “nowhere near enough time” on the miniguns. The M134 nomenclature is still used, but only when the gun is mounted for aerial use (for instance, as a helo door gun). This is operator-level maintenance disassembly of a Mk 44, NSN 1005-01-576-3284: 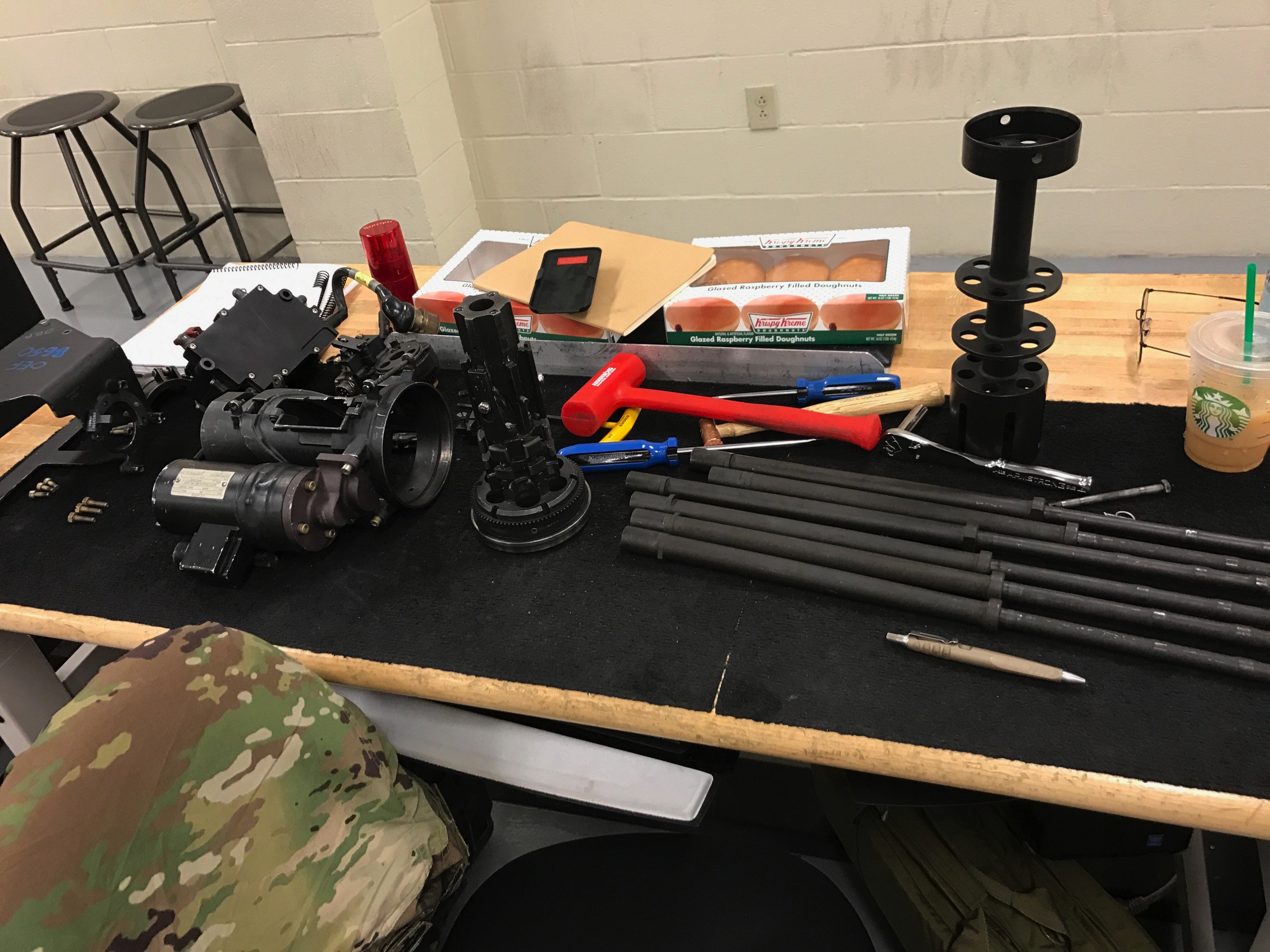 Contrary to normal Hollywood practice, the Mk44 is not an individual weapon for a muscle-bound refugee from WWE, but a vehicular weapon. If it has an Achilles’s Heel, it’s the electrical system. The Navy specified paper fuses, and it’s not easily to tell when a fuse is blown… the first thing an SF armorer or 18B needs to do is replace the fuses with similar value ones from the vehicle maintenance shop. Because it’s a 24v system, it adapts readily to military vehicular or aircraft electrical systems, but is harder to install in nonstandard vehicles. (It can be, and has been, done, but it’s a pain in the neck). The weapon system, complete, draws 2,500 watts of power.

After juice problems, the next most common reason for a Mk 44 going silent is ammunition exhaustion. It burns a lot of rounds at a rate of about 3,000 / min cyclic. (The rate is selectable but that’s the standards). It’s often installed in a Mk49 CROWS, which is relatively trouble-free compared to the gun itself, but can also be fired by a double spade grip on the backplate, and that’s one of the more common ways for SF to use it. Found on YouTube, SF at the range:

Basic load is a multiple of 3,000 round ready canisters. (The Vietnam-era 1,000 round cans seem to be obsolete). The cans need to be changed before you shoot up the last rounds in the approximately 14-foot long (~4m) flexible feed chute, or reload will be a slow and exacting experience, and if you are under fire your teammates will call you hurtful names.

Even as the SCAR has fallen out of a favored position as the doorkicker-gun-par-excellence, there’s word that Big Green is buying a quantity of them, and they are being relabeled the CAR because the S in SOF Combat Assault Rifle no longer applies.

SF and all ARSOF loves it when Big Green buys something that we pioneered, because it means we can get more with regular Title 10 appropriated funds and not use our MFP 11 SOF money for that. Sure, it’s all the same tax blood coming from the same taxpayer turnips, but the finite pool of SOF money has to buy everything from TF 160’s next space age flying thing to improved foreign-language training classes. As you can imagine, the fly guys and the language instructors (not to mention futuristic communications and ISR-device users) get bent out of shape when we “misuse” what they know is “their” money merely for stuff to kill the enemy with, which they point out that we can do perfectly well with two sticks of wood and 18″ of twine. So when we get guns that are shared with the big Army, it’s better for everybody: we think it often gets them better guns (they sure liked lightweight 7.62mm machine guns), and we know it gives us more cash to spend on our other priorities that are less in-demand among the general purpose forces (who have their own track record of killing the enemy, after all).

That’s anybody’s guess. Wider issue of the .300 BLK upper has been a matter of controversy inside SF — some are strong for it, some oppose it. The guys that have it have been dealing deadly execution with it. But SOCOM has reportedly solicited offers for 25 thousand .300 BLK PDW/CQC kits: with a side-folding stock and a 10-inch .300 BLK upper.

There’s no real interest in piston uppers or 416s. Fanboy stuff for the civilian tacticool community, really. Nobody’s shown us a data-driven test that documents any significant improvement. (Remember, the 416 was bought by SOF ~15-20 years ago to solve a short barrel reliability problem that’s now well-licked in DI weapons).

Magazines are prosaic but they’ve come many miles. We’ve gone from having only a couple of decent magazine choices to a great quantity of types of solid, reliable, consistent-feeding magazines. The days that you had to run steel HK mags because the issue mags sucked so bad are long behind us; even the issue mags don’t suck. The HKs are still good, but why pay the dollar and weight premium? Magpuls are good, too — the Marines are standardizing on them — and they’re not the only good polymer option.

There’s also no real interest in a reversion to 7.62 in any of the current platforms as a standard, baseline weapon. Afghanistan and Iraq/Syria are a bit unusual in offering lots of long-range engagements. Unless their predeployment training dropped the ball (which some units have managed to do), our riflemen across the board are far more lethal than the enemy anywhere inside the 800m envelope. The enemy still deploys (apart from MGs and snipers) weapons that are outranged by our rifles, mostly 7.62 x 39 weapons with short-radius open sights; the AK platform fails to exploit the accuracy potential of its cartridges.

With the war continuing, we may not see major fielding but we’re going to see lots of improved developments. We are currently in a place where some of the last decade’s developments need to be digested and promulgated. We’re not sure where the soldier of 2117 will be fighting, but the odds are pretty good he will be fighting with a weapon that launches metallic projectiles from the shoulder and weighs about 6 to 10 pounds. As has been the case since about 1617.