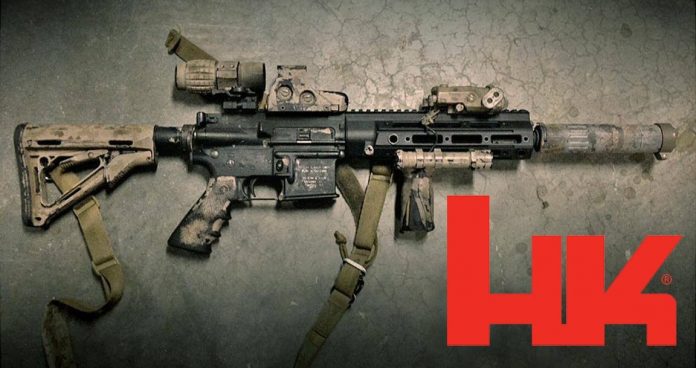 Last month the International Defense Industry was shocked when H&K “lost” the bid to replace their G36 service rifle in the Bundeswehr with either the HK416 in service with several peer nations, including the US with SOCOM and the Marines, or the newer HK433.

Instead Haenel, a company owned by the same group that owns Caracal in the UAE, announced with the German Ministry of Defense that they had won the contract with their MK556. The MK556 is essentially a 416 ‘Clone’ in many respects and H&K calmly filed an expected appeal.

Haenel then announced that the MK556 would be ‘90% German’, which is odd but not unheard of. American service weapons are required to be made domestically, even if a foreign owned company won the contract (FNH) which has led to huge civilian domestic market sales for many manufacturers as a side benefit. It isn’t clear if this requirement exists in Germany.

But shortly after the normal appeal was filed by H&K, this short release came from the Bundeministerium der Verteidigung (the Federal Ministry of Defense)

Assault rifle of the Bundeswehr: status of the award procedure

On the basis of the request for a review by the company Heckler and Koch received by the 1st Federal Procurement Chamber at the Federal Cartel Office on September 30, 2020, the Federal Procurement Office (BAAINBwFederal Office for Equipment, Information Technology and Use of the Bundeswehr) for the first time verifiable of a possible patent infringement by the company CG Haenel GmbH(Company with limited liability) Knowledge.

The internal examinations initiated thereupon led to the result that a corresponding patent infringement by the bidder CG Haenel GmbH(Company with limited liability) to the detriment of the bidder Heckler and Koch cannot be ruled out.

Against this background, the federal awarding authority was required to send the information letter (Section 134 GWB) to the bidders about the intended award of the contract to the company CG Haenel GmbH(Company with limited liability) cancel.

The federal awarding authority will thus re-evaluate the offers, taking all aspects into account.

[Translated from German via online tool]

This indicates that Haenel’s contract has been, at the least, suspended if not outright cancelled for possible patent infringement. It is not clear if the patent infringement was simply to the detriment of the H&K bids but was a third party’s patent that wasn’t properly used under license or if the patent is held by H&K themselves and they are alleging that Haenel essentially copied their design for less and then had the audacity to sell it to H&K’s pinnacle client.

Imagine designing a copy to the Toyota Tundra and then selling it to Toyota stocking dealers, similar audacity.

So the German service rifle update that was briefly known is now unknown again, although the other two candidates are both H&K submissions and the current rifle is an H&K so… they probably got it back.

What I am most curious about it the exact nature of the patent infringement in this case. I would also genuinely like to see more of the HK433.

And right after that contract cancellation the Germans scrapped the G26.

You can read TFB’s report here.

But the short version is Germany was looking for a compact 7.62×51 NATO DMR similar to the M110A1 CSASS (another H&K product for the US). A rifle about 35 inches long (900mm), gas operated, ambidextrous, suppressor capable, STANAG 4694 rails (updated 1913 Picatinny), 6000 round minimum service life, under 10lbs bare, etc. A pretty typical modern solicitation for a small order (145) of supplemental specific mission rifles.

The program is now over, cancelled for an unknown reason. It is rumored that the five contenders, two allegedly from the US, did not meet the demanding requirements. Whether this was accuracy, environmental, or durability is also unknown although allegations of ridiculous accuracy requirements have surrounded the G36 replacement project as well.

I personally begin to think that the MoD doesn’t understand caliber and material limits. 7.62×51 is only a reasonably accurate round to begin with, even in match. It is too light/short to achieve an amazing ballistic coefficient. SOCOM here has taken 6.5 Creedmoor to heart for a reason. The same can be said of 5.56 NATO. The current crop of M855A1, Mk 318 SOST, and Mk 262 SDMR ammunition is among the pinnacle of current designs and produce acceptable to excellent accuracy within the limits set by the design.

So by the MoD limiting submissions to 7.62 NATO, and assuming a select ammunition, they are setting a limit on what the companies can bring to the table. It was this same limitation that has largely prevented the M4 and M16 from being replaced directly, nothing in 5.56×45 could be better enough to justify the expense on a DoD wide scale, the AR-15 is a damn good rifle when built well. The M4, M4A1, and M16A4 are well spec’d and able to be built well. Therefore, as much as the SCAR or HK416 outperformed the M4 (and they did), it was academically and not practically. Especially not for a 3:1 unit cost.

There is certainly politics involved in national defense and the German government has not always loved themselves some H&K. There are elements within the German government that seem to believe H&K is a relic of Nazi Germany and that the existence of a firearms manufacturer within German borders is abhorrent. At least that is the general impression I get sometimes as I peruse the available writing.

At some fundamental level they know they need the Bundeswehr, but they dislike that and they dislike H&K. Therefore they may want to make H&K pay ‘sin tax’ for making weapons, even weapons the Germans need. So perhaps they leverage this sin tax through unachievable requirements to burn R&D, in a similar matter to the California DOJ adding stupid requirements to new pistols for ‘safety’ and disallowing new models as a result.

This is pure speculation on my part but the German government certainly does enjoy making it hard for H&K to make a Euro.

Anyway, no new toys for the under equipped Germans. Remember when their rapid response troops went to a critical NATO joint training exercise with brooms? GAT Daily remembers.

The Taurus G3c – The New Calf