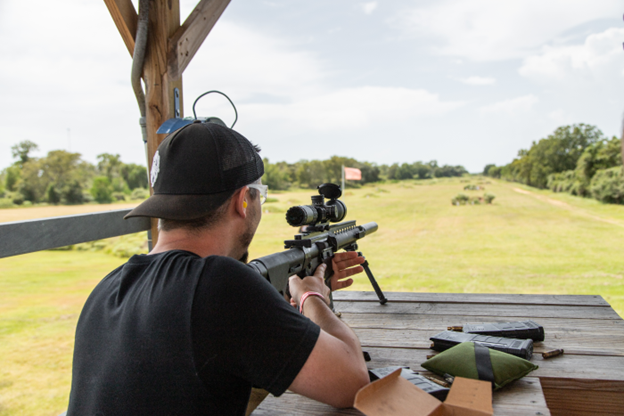 When talking about the everyone’s favorite go-to rifle, there are many interesting topics that we can discuss. However, while it might not be the most pressing topic, it certainly comes up enough to warrant even further examination. What is the ballistic potential and the sweet spot for 5.56×45 and the .223 Remington cartridges out of mainstream AR-15 builds?

This article seeks to talk about the variables involved with understanding the 5.56 effective range and why these cartridges work so well for the AR-15 and what a shooter can expect when shooting these cartridges. A lot of interesting answers come up when looking at this topic from a holistic perspective – so we’d like to do that.

What Do You Want to Accomplish with Your Plain Vanilla AR?

Because of the heavy manufacturers’ support for the AR-15 and the huge number of components that are available on the market, including simple drop-in upper receiver conversion kits, that allow shooters to change direction or enhance capabilities on the fly, the AR-15 can do many, many things.

If you’re sticking to the range and using the gun just for sporting purposes without the inclusion of hardcore target shooting or hunting, you’re probably not even approaching the limits of the range for these mainstream AR-15 cartridges. You’re likely to be shooting under 150 yd, and almost certainly under 250 yd, where the .223 Remington and the 5.56×45 cartridges are right at home.

And let’s dispel a little bit of the rumor that these aren’t particularly accurate cartridges. The .223 Remington was the cartridge of choice because it had an inclination towards accuracy and offered other strategic benefits to the military during its period of development.

These strategic benefits included the grain weight ranges of the bullet, the cost to produce millions of rounds of ammunition and the ability to carry more cartridges on a single person as well as storage implications when talking about magazines. “Magazines” meaning bulk storage for ammunition as in: an ammunition cache, not the 30 round magazine made to GI spec.

So, while there are more accurate rounds on the market, and even more accurate rounds that fit well within the AR-15 ecosystem, it’s almost completely ridiculous to make the statement that for most shooters doing most things, including bridging between multiple use cases with the AR platform, that these cartridges are inaccurate.

Now here’s the other side to that coin: both rounds could be more accurate. Some of that has to do with the specifications for the different component hardware parts on the AR platform, and part of it has to do with ballistic improvements and engineering improvements that have come around since the original development of cartridges like the .223 Remington, etc.

When placed apples to apples the .223 Remington is going to be more accurate than the 5.56×45 cartridge and when shot out of the proper barrel you’re going to get better accuracy results across the board. This includes matching grain weights to twist rates, as well as chamber dimensions to specific load and cartridge qualities.

What Is The Scenario?

In a home defense scenario, you’re not going to need to pay as much attention to long-range accuracy, so for those who plan to bridge into home defense or personal defense, this argument is a moot point. There is a low likelihood that you will ever shoot more than 75 to 100 yards in a defensive scenario.

For hunting, and extreme target shooting, that’s where the argument really takes shape. When talking about target shooting, the extreme range capabilities of the .223 Remington probably reach out to about 375 to 425 yd. You can make the same argument from a hunting perspective, however, terminal ballistics at that range may not be able to dispatch certain classes of animals.

If you’re simply talking about stalking small to moderate sized deer, you’ll probably be fine, if you adjust for bullet drop. If you’re talking about taking anything larger than 250 lb. at 425 yards, start looking at a different caliber on the AR-15.

Some honorable mentions are the 6.5 Grendel, and the 6.8 SPC, as well as the 224 Valkyrie. All these cartridges make more sense at that distance especially given the grain weight considerations.

What Has Been Seen as Realistic on The Battlefield Over the Last Four Decades?

By the way for clarification – an AR-15 does a lot of things well – to simply relegate it to the battlefield because the US Armed Forces uses it so heavily would be unfair. Similarly, to discount it as only something other than a battlefield rifle would also make little sense.

And let’s be honest, the AR-15 on the battlefield is very rarely taking or making shots beyond 400 yards. Even at that extreme end of the spectrum, it’s extremely unlikely and AR-15 is going to engage in battle at that distance with any type of Target, except perhaps to lay down cover fire, which doesn’t really occur at those ranges.

When it comes to comparing the AR-15 to other battle rifles, we’ve all been down this road before. The AK is a great gun. The AR-15 is a great gun. Regionality and personal preference factor into this conversation more than anything else. To say that one is better than the other, simply doesn’t make any sense.

You’re probably going to get better terminal lethality out of an AK-47 in the intermediate range, but you’re going to be carrying a heavier gun with heavier ammunition, and the AK doesn’t have nearly the accuracy of the AR-15.

If you’re talking about the effectiveness on the battlefield both guns can make great arguments.

Simply put, both guns are going to operate in a range of at maximum, 425 yards or so. Both are lethal past that point, but it’s going to be hard to place multiple consistent shots on target at that range in most settings.

In all reality both guns, and by volume and popularity and capability no other battlefield system really comes close to these two in comparison, are going to best operate in a range between 75 yd and 275 yards.

A new breed of AR-15 cartridges being born doesn’t mean the 5.56 or the .223 have become obsolete

It’d be ridiculous to say, even upon the backdrop of the above-mentioned, improved-upon cartridges, that can fit into the AR-15, that the 5.56 and the 223 Remington just don’t make any sense. They will always make sense on the AR-15. There are good all-around cartridges for home defense, target shooting within reason, and even up into big game hunting. From a small game perspective, they’re an excellent choice across the board.

For home defense one could make the argument that the 300 Blackout makes more sense, or the 6.8 SPC has more lethality, and those arguments would be correct. It still doesn’t discount the capabilities of the .223 and the 5.56.

Here are some real benefits of utilizing 5.56 or 223’s on the AR platform still

The market availability is probably the best argument for the .223 or the 5.56 on the AR platform. And that, given that the market saw huge difficulty in finding readily available ammunition during periods of the last 5 years. Simply put: the 223 and a 5.56 aren’t going anywhere anytime soon.

They still make way too much sense from a utilitarian perspective and are plenty accurate for most use cases.

Should we talk about the nuances of the AR-15 native cartridge’s effectiveness?

The AR-15 was originally intended as a battlefield rifle, and has, because of the fantastic manufacturer support and hardware manufacturing support to the ecosystem, as well as the benefits of using the cartridges that it is natively employed to use, has become America’s rifle.

By extension, it’s making a case as the world’s rifle. And that is an interesting perspective to have, considering the success of the AK-47 and variants throughout the years. But the sales volumes and adoption practices around the world tell the story.

And when it comes down to it, what more are you going to ask from a rifle, when your primary objective is to shoot things in a range of less than 250 yards?