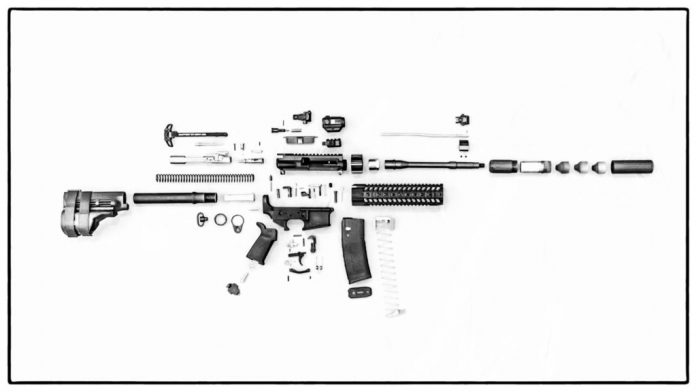 In the debate over “assault weapons”, the model designation AR-15 holds a prominent place.  This model is nearl —but not quite—plug-compatible with the US military’s M-16. (The AR-15 does not permit automatic whereas the M-16 can be selectively fired as an automatic.)

Most of the debate revolves around the definition of “assault weapon”.  “Assault weapons” ban legislation is fatally flawed in that they attempt to ban their target based on either:

An interesting case has come about in which the defendant, Joseph Roh, is charged with illegally manufacturing AR-15s, both complete rifles and lower receivers, without having registered as a Federal Firearms Manufacturer.

A fascinating aspect of this case is how it revolves around the definition of a firearm as it applies to the AR-15.

The Bureau of Alcohol, Tobacco Firearms and Explosives (ATF), the gun industry and gun-owners have developed a de facto consensus on the definition of an AR-15 as a firearm.  If you possess an artifact with certain specific precise dimensions, with a few holes in precise places, then you possess a firearm of type “AR-15”.  If that artifact is not complete, but is any more than “80%” complete, it is still a firearm.  And, thereupon, your possession of that artifact must conform to various Federal laws.

How else could any law work?  If the law purports to regulate some artifact, then the law should describe that artifact with sufficient specificity and clarity that any person with reasonable care can apply the text of the law to an object in hand and recognize whether it is or is-NOT legal.

The consensus notwithstanding, it has been known for some time that the Federal legal definition of a “firearm” doesn’t readily apply to the type labeled “AR-15”.  The definition in the law was drafted pretty reasonably; it’s just that that definition doesn’t fit any particular part of a firearm of this modern sporting variety.

Adam Winkler, the UCLA constitutional law professor and Second Amendment author states that the Joseph Roh case: “. . . could open up a huge loophole in federal law.  It could lead to an explosion in the number of AR-15s out on the streets.”

Winkler’s hyperbole notwithstanding, the problem remains that laws drafted by legislatures are, unavoidably, always incomplete and behind the creativity of inventive gunsmiths.  The actual implication of this case is that  two parallel industries could spring-up, each perfectly legal. Manufacturers in one industry would make one AR-15 component known as the “upper receiver”; while those in the second industry could make another AR-15 component known as the “lower receiver”.

Under current law, neither these upper nor lower receivers would need to be marked with a manufacturer’s identity or a serial number.  Neither would be a “firearm” so long as the two parts were kept apart; i.e., neither in the possession of a single person.  Anyone, man, woman or child, felon or virtuous, could buy one of each—whereupon he would be in possession of a “firearm”.  Yet, that would be his own private affair of no impact on either manufacturer from whom he purchased the parts.

While the ATF, gun industry and gun owners would all regard the second manufacturer (of the “lower receiver”) to be in the business of manufacturing firearms, the ATF could have grave difficulty persuading a judge that such a manufacturer were doing anything unlawful.  Some judges might give great weight to popular consensus (i.e., that the “lower receiver” is the firearm) while other judges could rule in favor of the defendant manufacturer, given the thinking behind the Roh case.  Once any of the dozen Circuit Courts of Appeals rules in favor of such a manufacturer then the jurisdiction of that court could become highly popular for lower receiver manufacturers to set up shop and operate with impunity.

There is no ready solution to the sort of problem raised by this AR-15 definition in the Roh case. The text of a law can’t hope to keep up with ingenuity.  It’s not a reasonable solution to subject every part of a gun (every spring, every screw) to regulation as if it alone were a firearm.  Given current understanding, one would not say that only the assembled collection of parts constitutes a firearm.  Some sort of practical solution will be needed.

The legitimate firearms industry and user community has come to an understanding with the ATF that the lower receiver technically constitutes the firearm. Things run smoothly with this agreed upon rule.  Never ending attempts to legislate the definition, like a cat chasing its tail, could end as a futile attempt to regulate artifacts while ignoring actors.

Yet, this is merely a gentlemen’s agreement rather than a conclusion well fitted to the law. Regulation of firearms—to the extent permitted by the Constitution—depends on the consent of the governed, a goal now under enormous stress by the movement for ever more onerous gun control.  If, as and when that consent is withdrawn, the public will suffer the collateral effects.