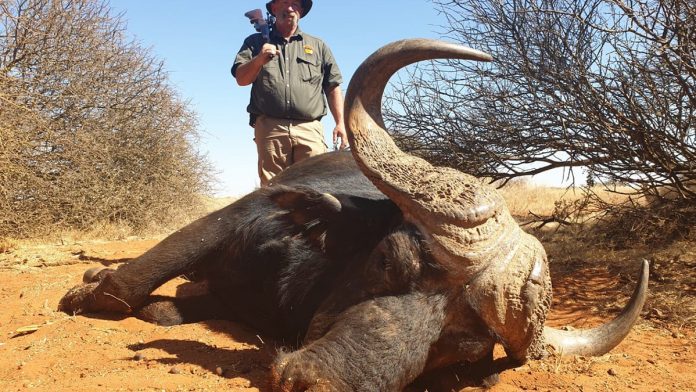 Every year, professional hunters and clients alike are injured or killed by dangerous game. When lives, livelihoods and often expensive trips are on the line, it’s best to come prepared with the best rifle and caliber to get the job done.

LOOK THROUGH GUNS.COM’S INVENTORY OF NEW AND USED RIFLES

On my latest South African safari, I spent nearly three weeks alongside Boetie Cooper of Waterval Safaris and Stephen Bann of SB Hunting Safaris. Though the two men run separate businesses in South Africa, though they often team-up for dangerous game hunts. What do Cooper and Band suggest in the way of rifles destined to harvest ornery buffalos, charging rhinos or stalking lions?

Cooper says that, like any gun, reliability is a key factor. “The number one requirement of a dangerous game rifle is reliability. It must work every time and all the time. The hunter must never wonder whether the rifle will function,” Cooper explained.

He went on to assert that after reliability, big game hunters should turn their attention to hard-hitting performance capable of downing large game followed by the comfort of the shooter. He maintains that the shooter and the rifle should work as a single unit. “You and that rifle must become one because your life is depending on it,” Cooper said. Bann looked to the stopping power of the rifle, asserting that it needs to have enough oomph to down game in its tracks. “It is a rifle that can stop any dangerous game animal in its tracks if the shot placement is perfect and the correct ammunition is used. So basically, the rifle must have enough stopping power and the hunter must be able to shoot it well.”

Action-wise, both hunters unanimously agreed that bolt-actions perform the best on dangerous game guns due to their controlled round feed, affordability, and reliability. Guns like Winchester’s Model 70 Safari Express, Ruger Safari, CZ 550, all chambered in .375, are well-built for their intended purpose — standing between hunter and hunted.

Having the right rifle is only half the battle; it must also be chambered in a capable caliber. Most dangerous game hunting in any country calls for .375 minimums. It’s also good practice to choose ammunition that is available in most areas of Africa, should you find yourself in need of more rounds. Cooper prefers bolt-action rifles due to their innate firepower and his own familiarity. Though Cooper suggests .375 H&H, .416 Rigby and either .458 Win Mag or .458 Lott, his favorite is the .375 H&H. “The important thing is finding a balance between enough gun and one that a client can shoot confidently even with the recoil. A well-placed shot with a good bullet from a .375 will get the job done every single time,” Cooper said.

To Scope or Not to Scope

Stout express sights and thick hooded jobs come standard on many rifles, yet more and more hunters are opting for low power, quality optics that can withstand significant recoil. Despite the confidence optics grant hunters, both Bann and Cooper believe in the importance of shooting with iron sights.

“For most clients, a scope is good to use and builds confidence, but I always make sure they can use their iron sights as well. We always spend time on the range together before we ever go afield,” Cooper said.

When it comes to break out an optic, though, Cooper relies on the Leupold VX-3 while Bann runs the Trijicon RMR — which also allows co-witness with iron sights. Chasing Africa’s Big Five, or more importantly, any of the Dark Continent’s Dangerous Game animals requires not only great nerve, stealth and hunting ability, but also the right rifle and gear. Making an accurate shot with ample knockdown power and round performance often yields a clean harvest as well as a safe hunt.