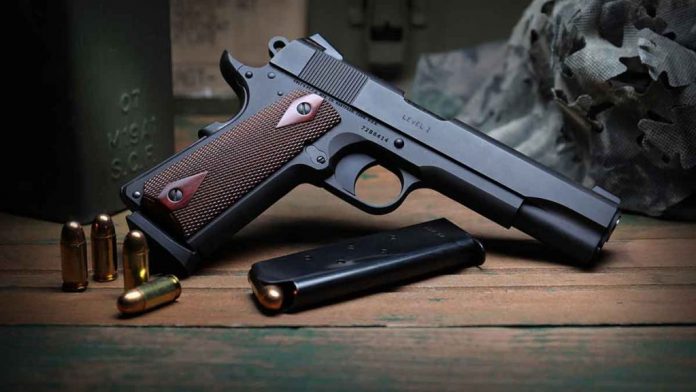 A 1911 is always an attractive pistol but it only functions as well as its magazines (Photo: Don Summers/Guns.com)

When trying to find the best magazine for your 1911 there are a few factors to consider. 1911’s, like many pistols, depend on high-quality magazines to function at optimum performance.

The last thing you want to do is spend good money on a 1911 only to have a subpar aftermarket magazine render it useless. Always here to help, Guns.com has you covered with a few tips on selecting your next 1911 magazine, along with a few companies we recommend.

When we say tension, we’re referring to the weight and build quality of the spring used to hold the follower in place. In lower-quality magazines you’ll find weak springs without the power to properly load the next round — especially seven or eight rounds in. A good mag makes all the difference (Photo: Don Summers/Guns.com)

Quality magazines will be stubborn when you first break them out of the box. A good rule of thumb for a quality magazine is the last couple rounds should be hard to load, especially when new.

Similar to tension a high-quality magazine will be built from solid material. Many of the lower grade magazines are constructed using ultra-thin pieces of stainless steel or “genuine metal” on some of the more egregious mags.

Often these lower grade models are highly polished causing unsightly glare in sunlight. This of course makes reloads troublesome in harsh light. The shiny finish also has the reputation of causing a poor grip – in short, stay away from highly polished magazines at low price points.

When you get your magazine, inspect it first. There should be no rattling of any sort with the mag ejecting cleanly and smoothly from the pistol. It’s important to purchase magazines from quality manufacturers. Investing a little extra in a reputable mag maker will ensure that the best 1911 performance. Here are some we recommend:

When it comes to manufacturing magazines Mec-Gar is among the best in the world to do it. Edoardo Racheli founded the company in 1965 with the sole purpose of making high-quality magazines, a tradition that lives on today.

Mec-Gar prides itself on using the best materials to get the job done. All of their magazines are manufactured out of AISI 1010 Carbon Steel or 17-7 PH stainless steel with springs constructed from high tensile strength spring wire to make sure rounds always get loaded.

In addition to selling their own mags, they also manufacture factory magazines for several well-respected gun makers, meaning they know their stuff.

GET A DEAL ON MEC-GAR MAGS TODAY!

CMC Mags, or Chip McCormick magazines, are considered among the best you can feed to your 1911 for good reason. Founded in 1986 by champion pistol shooter Chip McCormick, the company grew quickly to sell some of the best magazines for 1911s around.

In 2018, the company was sold to Wilson Combat who continues to uphold the sterling reputation.

Speaking of Wilson Combat, we can’t ignore the 1911 powerhouse that is the brand. Aside from owning and producing CMC Mags, the company manufactures its own line of 1911 magazines.

Founder Bill Wilson has been at it since 1977 and over 40 years later, Wilson Combat is still making incredible 1911 products. A focus on excellence and a reputation for being American made set Wilson Combat apart from the crowd.