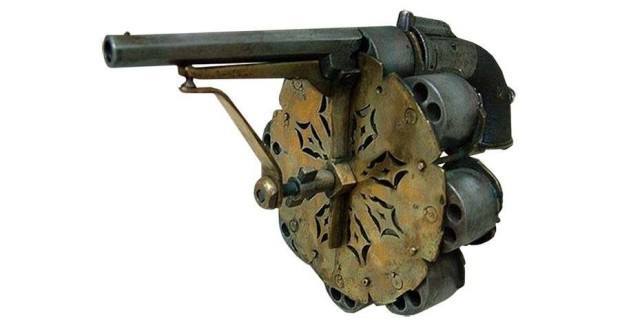 Oh boy, do I love weird guns. Two genres of firearms that often attract the weird are shotguns and revolvers. Today we will be focusing on the revolvers and not the shotguns, although there are a number of revolving shotguns that could make for a great crossover. Throughout history, there have been some weird revolvers, but I want to focus on the weird revolvers of the modern era. (Although the history buffs may get their own weird revolver article soon enough.)

Korth is known for making their guns unobtanium and extremely expensive, and the Sky Marshal and later Sky Hawk series are more affordable at only about a thousand dollars. These 9mm revolvers are best classified as snub noses with 2-inch barrels, although a ridiculous-looking 3-inch model existed.

The first oddity about these guns was the caliber. These were 9mm revolvers which are uncommon but not all that unheard of. Korth did develop a system with the cylinder to avoid the use of moon clips, which I can appreciate.

This is also not completely novel, but still an oddity. What was a cool idea was the fact they didn’t just use a .38 Special cylinder. They tailored the cylinder length for the shorter 9mm.

Another oddity was the placement of a small section of rail on the side of the barrel. This is an odd place to put a light, but it is really the only way to fit a rail on a snub nose revolver. Odd, but I can’t hate it. In fact, of all the guns on this list, this would likely be the one I’d purchase.

Let’s go to Russia for this one. In fact, the whole list could be weird Russian revolvers. The OTs-38 might be the most bizarre. This is an integrally silenced revolver. Not silenced like the Mosin revolver with a gas seal, but suppressed via the ammunition it uses. The 7.62x41mm SP-4 cartridge uses a captive piston inside the cartridge.

When fired, the gun propels the piston, which propels the projectile. The explosion is contained inside the cylinder and cartridge, thus rendering it effectively suppressed.

I’m proud to say America created this design with the QSPR revolver in Vietnam. These weird revolvers have some other oddities worth mentioning.

The OTs-38 uses a right-side opening cylinder. There is a manual safety catch that allows the user to carry the revolver with the hammer cocked but the safety on. Much like the Chiappa Rhino, the barrel aligns with the bottom cylinder of the revolver and at the top is a laser sight for aiming the weapon. I can only imagine the number of dissidents killed with this thing.

The Model 6 Unica is one of my grail guns. I’ve wanted one since I watched Ghost in the Shell as a kid. This gun is affectionately known as the Autorevolver. It’s a semi-automatic revolver. The gun’s first shot is in double action, then a portion of the gun slides rearward. 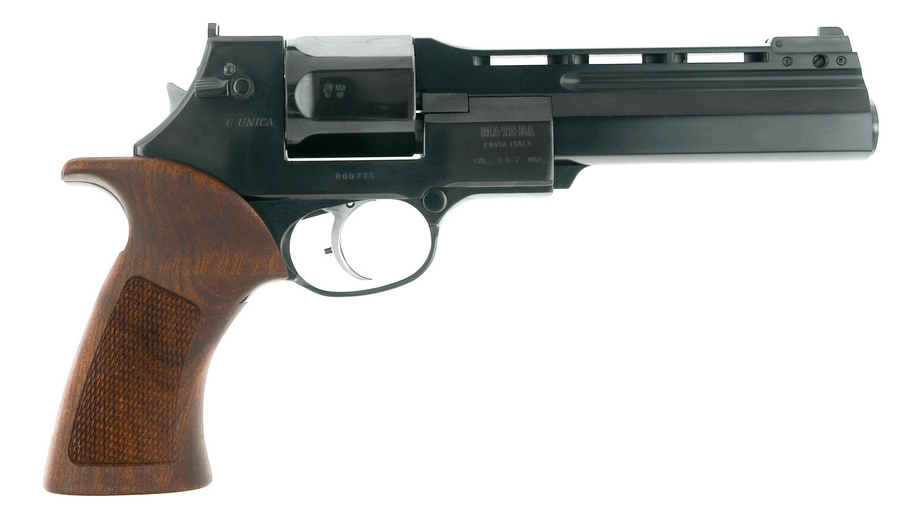 It’s an Italian design, and it resembles the Rhino because the same engineer worked on both guns. Like the Rhino, the Mateba fires from the bottom cylinder.

Interestingly enough, if the gun fails to cycle, it can still be used with another double action trigger pull. It’s recoil-operated, so it can be ammo sensitive. A .357 Magnum can chamber .38 Special, but .38 would often fail to make the weapon completely cycle and render it functioning like a traditional revolver.

Another Russian revolver is on the list. It’s a bit more practical but clearly one of our weird revolvers. The MP-412 Rex was designed for import, but due to an agreement between Clinton and Yeltsin, the importation of Russian firearms ceased around the time of this gun’s production. The Rex looks fairly practical and is a DA/SA, .357 Revolver that looks fairly modern. 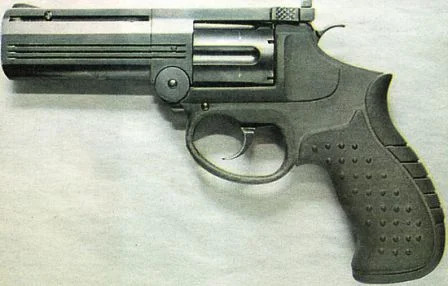 In the early 1990s, the MP-412 Rex was fairly innovative in its use of polymer. Russia used a steel reinforced polymer grip frame. It would be decades later that Ruger would produce the LCR with a healthy dose of polymer. This was a full-sized revolver with what appears to be a 4-inch barrel and an exposed hammer. The real weird part of the Rex was how you loaded and ejected the empty cases. Instead of a swing-out cylinder, the Rex used a break-open design much like the famed Schofield revolvers. The gun featured automatic ejection, and the cases would fly from the gun, which theoretically makes reloads a fair bit faster. It’s a real shame we didn’t get the gun imported into the states.

Century Arms announced the MDL 38-3 a few years back and promised that it would be the thinnest .38 Special revolver ever produced. They brought it to SHOT Show, showed it off, but then the gun never came to be. It’s somewhat unclear if these were imports or Century’s own creation. Sadly, the little gun never came to the market.

I’d buy one just for the novelty. How did Century make the revolver less than an inch thick? Well, they reduced the chamber to three rounds only.

This produced a very flat revolver. The barrel was a standard snub nose, and so was the grip.

If there is one feature a lot of these weird revolvers share, it’s firing from the bottom cylinder, and that was present here as well. The MDL 38-3 might not have been the most practical wheelgun, but it’s a unique one I wish I could get my hands on.

The Weird Revolvers Of A Big World

Revolvers have a lot of room to be weird, and weird can be good. Sadly weird isn’t always profitable and is often expensive. Even so, I’d really love any of the guns on this list, especially a Unica. Unica might as well be Unicorn. Maybe I’ll have to settle for a Sky Marshal instead.