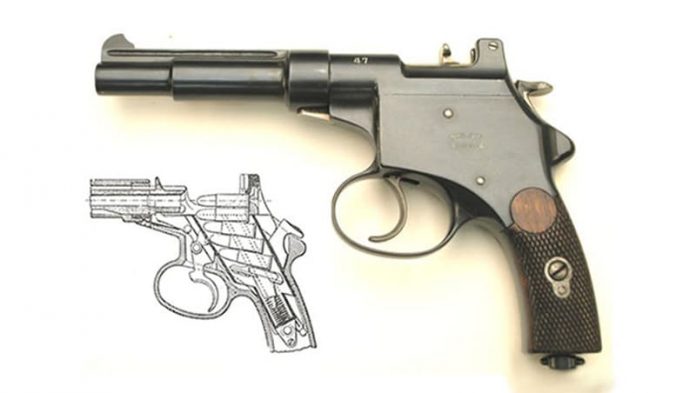 For a firearms enthusiast, seeing a gun design that completely ignores standard conventions that have been around for more than a century can feel about as jarring as seeing a car driving the wrong way on the freeway. In the case of the Steyr Mannlicher M1894, that simile is especially apt: Instead of a car driving the wrong way, it’s this handgun’s action that’s heading the wrong direction. With this pistol, the well-known blowback action is usurped by this mind-boggling concept: a blow-forward action. Sound crazy? It was. And dangerous, too.

Where you’ve seen it:

Given its unorthodox design and teething problems, its no surprise that not many examples were built, less have survived to today, and none have made their way into film.

The earliest Steyr pistol (Not the earliest semi-automatic pistol, though. Missed it by a year.) design, the M1894 had a few intrinsic problems that apparently got overlooked during the designer’s mad dash to compete with other semi-automatic designs emerging on the world stage. The most obvious, I think, is the pistol’s capacity: The Steyr M1894 held only five rounds by stripper clip, and it took so much wrestling with the pistol to load it that any benefit of this “speed loader” was lost. Its rate of fire made it about as fast to operate as a double-action revolver, only the latter was a whole lot more reliable and held an extra round. Notwithstanding, the U.S. Army gave it a look and ran it through a few standardized reliability tests. They found that cartridges had a tendency to jam up and misfire. Not promising. But the coup de grâce for the pistol’s future occurred when the barrel burst on the 281st round fired. One could make the logical leap and assume the reason for this catastrophic failure had everything to do with the pistol’s design.

Unlike a blowback action where the force of the explosion pushes the slide back, the Steyr M1894 utilized a blow-forward action where the breech stayed fixed in place, and the barrel blew forward—extracting the shell casing and cycling the next round—using the friction of the exiting bullet. A steel housing covered the length of the barrel, concealing a recoil spring wrapped concentrically around the barrel. As the barrel moved forward—pushed by the expanding gases and the inertia of the bullet—the spring compressed until it rebounded and drove the barrel back into place for the next round. Contrary to what one might think about the forward forces reducing recoil, this design was apparently a real handful, and not particularly pleasant to shoot.

The Steyr M1894 fired the 7.65x21mm Parabellum, commonly known as the .30 Luger. Ballistically similar to the 7.62x25mm Tokarev round, the 7.65x21mm delivered approximately 300 foot pounds of energy upon delivery. Not too shabby.

One of those designs that seemed a whole lot smarter on paper than it proved to be in practice, the Steyr M1894 will always hold a special place in firearms history as one of the most eccentric and poorly conceived designs ever dreamt up.