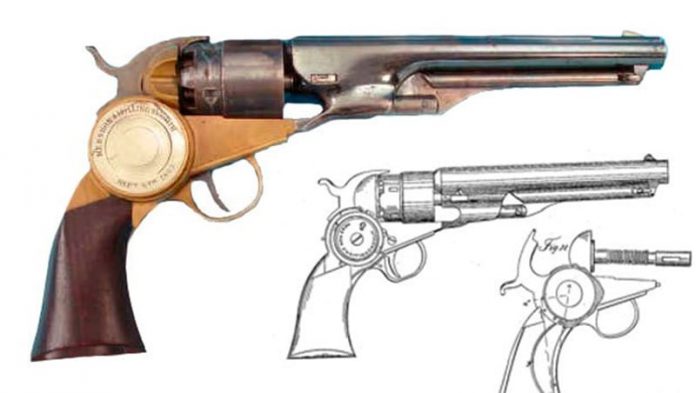 When my buddies ask me why I collect antique guns, I explain that it’s not unlike collecting old timepieces: Their varied designs are fascinating works of art, and you can still take them out and use them from time to time. So imagine my enthusiastic reaction when I discovered the Mershon and Hollingsworth revolver, an age-old design featuring a winding mechanism just like that of an old pocket watch. This self-cocking revolver—the first of its kind, predating the Webley-Fosbery by 30 years—is the perfect bridge between my analogy and reality.

The year was 1863, and the U.S. was busily fighting that disputatious disagreement known as the American Civil War. As with any pitched battle, both sides were desperately pursuing any and all possible leads to new, more fearsome weaponry to outdo their opponents. The problem with being desperate is, you’re apt to entertain ideas that would otherwise be considered too convoluted for practical use. Such was the case with the Mershon and Hollingsworth self-cocking revolver. Essentially a modified Colt Army Model 1860—a standard-issue, muzzle-loaded, cap and ball, .44-caliber revolver—the Mershon and Hollingsworth had one insurmountable flaw: It sought to fix a problem that didn’t exist. The designers argued that standard single-action revolvers like the Colt 1860, and even double-action revolvers like the Beaumont–Adams revolver, required too much effort to cock and fire:

“In this very important particular consists its great superiority over all other self-cocking arms, all of them requiring so much muscular effort in pulling the trigger as to wholly defeat or disturb the aim and object of an arm, except at very close quarters.”

For anyone that’s shot a single-action or double-action revolver, you can see why the army might be a little incredulous. Neither is especially difficult to operate. What little benefit this device would have offered in lighter, faster trigger pull, it lost in added cost of manufacture and complicated functionality.

The Mershon and Hollingsworth used a wind-up spring to power a ratchet inside the hammer. A fold-out handle on the left side of the revolver’s frame (shown, right) facilitated winding the spring. With the spring wound, the device worked as follows: When the trigger was pulled, the hammer fell, struck a percussion cap, and set off the round. As this happened, a lug at the rear of the trigger slipped into the device and kept it motionless. When the trigger was allowed to reset, the lug slid out of the device, allowing its spring to rotate an internal wheel which moved the hammer back to full-cock, and at the same time, unlocked, rotated, and re-locked the cylinder.

Here’s another major oversight on the part of the designers of the Mershon and Hollingsworth: They showcased their design using an outmoded revolver. Muzzle-loaded, cap and ball revolvers were common at the time, true, but the military wasn’t looking for common. They wanted better. Centerfire cartridges were less than a decade away from being widely adopted, and though this device would have likely worked with those more modern designs, it’d been forgotten about completely by that time.

The problem with my analogy about antique guns and old watches is showcased with this revolver: Both can be finicky—often beyond practicality. In the case of the Mershon and Hollingsworth revolver, the benefit of these tricky little devices didn’t outweigh their likely cost to produce and complicated nature.