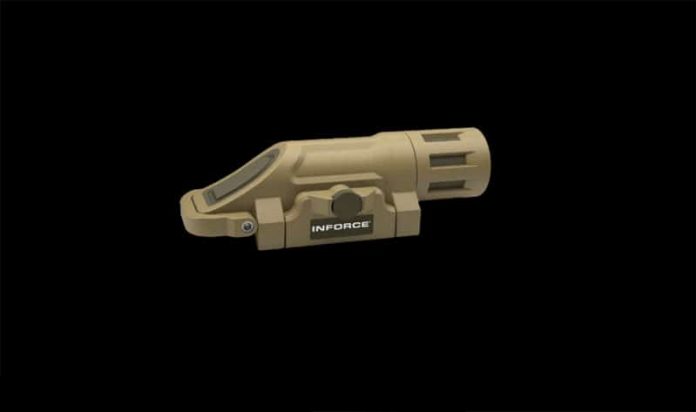 Looking for a new light for your AR-15? Say hello to the Inforce WML.

I recently built another AR-15 (they’re like potato chips—no one can stop at just one). In the interest of mixing things up a bit, I decided to keep this AR a lightweight build. With the main components together (lower, upper, barrel, etc.), I wanted a couple of lightweight accessories to finish off the rifle, namely a lightweight weapons light. As you’ve deduced, this is where the Inforce WML (weapons mounted light) comes in.

I first heard about the Inforce WML from Travis Haley of Magpul and Haley Strategic fame. When Haley introduced the new Jack Carbine (produced by BCM), I noticed the slick AR setup featured an Inforce WML light. The Inforce WML is a small, light weight (~3oz, including batteries), tac light that features a Picatinny rail mounting system, just the ticket for my new AR. On the low output setting, the Inforce WML generates a sufficient (for general use) 30 lumens. However, on high output, it beams a more potent 175 watts. However, white light isn’t your only option when it comes to Inforce’s WML; these lights also feature infrared light settings. On low output, the Inforce WML produces 25mW of 850nm light. The high setting juices up the beam strength to 75mW of 850nm light. When I got in touch with Abner from Inforce, he graciously sent me two of the Inforce WMLs, one in graphite, and another in FDE (Inforce also offers a “sand” color option, if you like that better).

I already mentioned the white light/IR options and brightness, but let’s dig deeper into what goes into Inforce’s lightweight lights.

The Inforce WML is 4.1 inches long and features a 1″ diameter low profile (non-crenelated) bezel—ideal for weapons mounting. At its full strength, the high output run time lasts 1.5 hours. If you’re running the low output 30 lumens, however, you can expect the battery to last up to ten hours. To switch from white light to IR, the operator need only flip a switch on the Inforce’s side. The rear button, slanted for easy weapons use without tapes or switches, can be programmed to switch from low to high, high to low, or use the strobe feature (easily disabled, if that’s not a setting you like). There are a few options for light output for the WMLs, too. You can opt for the no-IR 200 lumen light now, and Abner informs me that a 500 lumen model just released as well (can’t wait to give that a test drive—sunglasses might be needed).

One of the things that surprised me about this light is its durability. When the Inforce WMLs arrived, the first thing I did was to climb up to the roof of my local police academy and drop them the 35ft from the roof to the pavement. The only detectable damage, if you can even call it that, were a couple cosmetic scratches and nicks in the body. After that kind of performance, I thought, “what the heck, I’ll throw them on a couple patrol guns that really get abused and see how they hold up.” I handed each Inforce WML to LEO friends who, in turn, mounted the lights on their patrol rifles. Again, a few nicks here and there on the body, but no real harm. The only worse test I could give these lights would be to throw them on to the patrol shotguns—the patrol shotguns in my local department are the unit’s red-headed stepchildren, cared for none-too-gently—and see if they fared as well. Again, the lights came back to me plus a few scratches on the sides, but otherwise no worse for the wear. The reason the bodies held up so well is the material. The Inforce WMLs are made with a fiber composite material that can absorb abuse while protecting the light’s internals, while keeping the light’s overall weight down. On top of that, the body is water tight, waterproofing it for up to 66ft (good news for you nighttime rifle swimmers). Another perk to the design of this light is that the Inforce WML is tool-free. Just clamp it on your Picatinny rail, and you’re ready to rock.

List price for these bad boys is $150. But, if that’s too rich for your taste, don’t worry. It’s not difficult to find them at least $20 cheaper. As with most gear, shop around a bit, and you’ll find deals.

If veteran recon Marine and firearms trainer Travis Haley approves of them, Inforce must be doing something right. My experience with the Inforce WMLs backs up that trust. If you’re looking for a lightweight (3oz), minimalistic weapons mounted light that still stands up to heavy use, the Inforce WML lights are hard to beat. Competitively priced, they offer a convenient tool-free installation, effective illumination for every day or in critical range use in a streamlined 3 oz package. I’d say, that’s a lot of bright for your buck.