And let there be no mistake, there have been breakthroughs. Night vision has historically come in shades of green—that’s not a tech issue, but a human one. The human eye, adept as it is at interpreting reflected light as the world around us, can only register and process so much at once. Through extensive experimentation, shades of green proved to be easiest for the human eye to distinguish between, and as such, green was adopted as the monochrome color of choice for night vision tech. In truth, these goggles could display images in any color depending on how we built them—it would just limit our ability to interpret the images on the lens.

But what if we could do away with that monochrome idea altogether? After all, the human eye is great at picking out threats against a well-lit, daytime backdrop. That’s where SPi Infrared’s X28 night vision system comes in.

This video was recorded at around midnight, with no lighting beyond what can be seen in the distance:

Or how about this video of the beach, also taken in the middle of the night? When the camera pans up, you can see cloud cover with light stars behind it.

These images were recorded using SPi’s camera, which is not currently available as a wearable night vision rig, but as this technology continues to mature, it’s likely America’s special operations troops will soon enjoy the same level of detail and clarity during nighttime operations as they do during the day. As for the conventional side, chances are good they’ll be upgraded to something that keeps them from tripping over their own feet in the years to come, too. 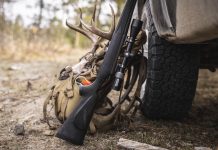 New Line of Riflescopes from Maven: The CRS Series