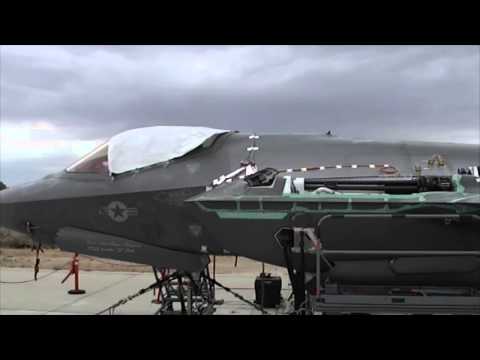 General Dynamics tested the onboard 25mm Equalizer cannon of the nation’s newest generation of fighter, the F-35, recently– and it was a short test.

The F-35 Lightning II, which is set to replace the Harrier jump jet, F-16, and A-10 in U.S. service as well as a veritable fleet of jets with overseas allies, is equipped in some versions with an onboard cannon for dog-fighting and strafing runs.

This four-barreled GAU-22/A model gun is a smaller variant of the five-barreled GAU-12 carried on the Harrier. Weighing in at 230 pounds, it generates 3,700 pounds of recoil when fired as it zips out chili-dog-sized rounds at a rate of 55 rounds per second.

Of course it only has a 220 round magazine, or about four seconds worth of buzz time, but hey…