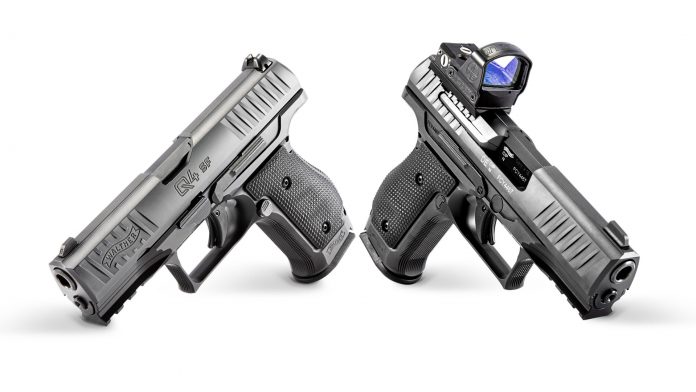 Outmatched by no one. Walther continues their tradition of superiority with a handgun designed specifically for those who only buy the best and nothing less. This is the ultimate representation of high-class performance in a conceal carry package that just can’t be found anywhere else. The new Walther Q4 Steel Frame.

Weight Distribution
When increasing performance on pistols, simply adding weight to the frame provides little difference. The Q4 Steel Frame is precision machined to properly distribute 40 ounces of weight to drastically reduce felt recoil, improving shooter performance. This revolutionary technique in distributing the overall weight of the pistol creates a superb balance in hand allowing the shooter to take advantage of the triggers short reset capability.

Ergonomics
Grip geometry and texture must be perfect, then aiming becomes second nature. The ergonomics of the Q4 Steel Frame is a feat in firearms engineering that simply must be felt to be believed. The combination of a reversible over-sized magazine release button, recessed ambidextrous slide release, and flawless balance in hand result in the most natural point-of aim.

Walther has pushed the boundaries of testing in some of the harshest conditions, whether it’s torrential rainfall, extreme heat, and humidity, icy cold temperatures, or thick mud, the Performance Duty Texture of the Q4 Steel Frame delivers peak performance.

The Quick Defense Trigger is a safe two-stage trigger with a crisp-break and short-reset. The first stage allows for consistent prep with a distinct wall that can be easily found under stressful situations. The second stage is the crisp break of the wall, resulting in accurate shots on target.

The reset of the Quick Defense Trigger measures only 1/10”, allowing the shooter to skip the first stage completely and fire the follow up shot by only moving their finger 1/10 of an inch. Resulting in faster, more accurate and consistent shots on target.

The quick-defense trigger is known as the best striker-fired trigger by nearly every critic.

The Q4 Steel Frame from Walther is an accomplishment that encompasses everything shooters desire in a premier concealed carry firearm capable of outlasting even the toughest conditions.
Despite common misconceptions, you can buy performance.