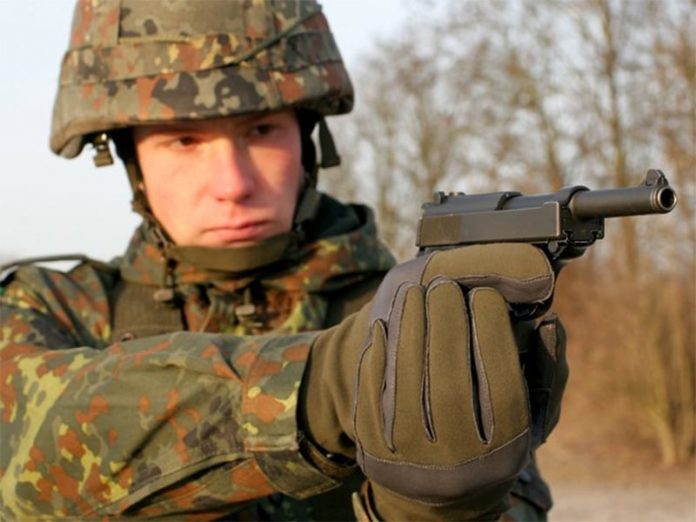 When you think of World War II German firearms many guns come to mind, heavy machine guns like the MG-40 or MG42, maybe the classic MP40 or the Luger P08, which was a prized war trophy for allied troops. Arguably the most notable German pistol was the Luger P08 but it was a hold over weapon from the Austria-Hungary Empire of  the First World War. The Luger P08 was expensive to build and was labor intensive, that played a large part into the creation of the Carl Walther designed pistol model of 1938, or the Walther P38 pistol as it came to be known.

The Walther P38 was largely over shadowed by the ascetically pleasing lines and easy handling Luger P08, despite its rather dull appearance the Walther P38 went on to serve the armies of the Wehrmacht, and later the modern German Bundeswehr. The P38 was filled with ideas and technology that in 1938 were cutting edge and who’s influence we still see today 70 plus years later. The story of the Walther P38 is a fascinating tale, and in order to appreciate it we have to take a look at the pistol in two distinctly different ways. First we will look at the technology and features surrounding the pistol, then we will examine the two different variants of the pistol in the P-38 and in it’s rebirth in 1957 as the model P-1. It’s important to know the distinction between the two versions.

Features of the P38

You have to remember that in 1938 firearms technology was rapidly expanding and companies were trying many different designs. The Walther P38 was the first commercially successful pistol to use a locked breech double action/single action system. The idea that a shooter could load the pistol, chamber a round then use a combination safety/de cocking lever to drop the hammer and render the weapon safe was mind-boggling in that time frame. The ability to then click the safety off and fire from what is now considered a “normal” double action firing system was highly touted. The Walther P38 also featured a loaded chamber indicator, which in 2017 is standard on many different pistols, but in 1938 there were very few guns that offered that.

When you add the double action system, the loaded decoder, the loaded chamber indicator into the equation its easy to see how revolutionary this pistol was. One thing that Carl Walther’s design team also did was to lighten the slide weight by making the slide as short as possible and allowing the pistol to drop unneeded weight. The pistols at this point in their production were made entirely of steel since Germany had yet to face any shortages in materials, production capabilities and had yet to suffer through the losses of manpower they experience after the Allies gained Air Superiority and began bombing Germany around the clock. Another feature that stands out about the Walther P38 is the eight round single stack magazine. This by today’s standards is a small capacity magazine but in 1938 the only major military sidearm that carried more rounds was the Browning Hi Power.

In 1955 then West Germany was allowed to enter into the North Atlantic Treaty Organization (NATO) and it was decided that they would need to find a way to re-equip their military in order to take part in NATO and the defense of their borders. The Soviet threat was real and the now Communist puppet state of East Germany was right next door so there was little time to develop new technology. Luckily the Germans still had some P38 plans and some parts left over from war. Germany turned again to the Walther P38 to be the side arm of the new Bundeswehr, but with a little bit of a twist. The new Walther’s would be designated the P1 instead of the P38 and the frames would be made of Aluminum instead of steel. This was done because of the cost and weight savings of steel versus aluminum. Once again Germany was at the leading edge of weapons design, this time by necessity.

Aside from the new frame material the new P1 was identical to the combat tested P38, even down to the magazine release being at the heel of the pistol instead of farther up the frame near the trigger guard. The fact that Germany chose a pistol that many of their first military members knew from their prior service made training them easier in the short-term. Little did they know that the P1 would go on serving into the beginning parts of the 21st century.

After nearly 70 years of serving Germany in one capacity or another, in the 1990’s Germany performed trials and it was decided that the old warhorse would be replaced. In 2004 the final Walther P1 was replaced by the new German pistol model P8, better known as the Heckler & Koch Universal Self Loading Pistol. That’s a big credit to the 1938 design team behind the P38/P1 that it took one of the worlds most durable polymer pistols to replace it. From its inception to its run ending years later, there were more than a million Walther pistols made in both aluminum and steel framed configurations.

In the 1980’s several of the major weapons importation companies in the United States began to get small batches of Walther P38’s in and over the last 20 years the flow of ex military and police issued Walther P38’s and P1’s has had some ups and downs. In the market of collectible military firearms the Walther P38 and as well and the Luger P08 are some of the most faked restamped firearms on the open market. Like most World War II collectables there are large groups of adoring fans for the Walther P38 that can tell you what each stamp on the pistol means and what factory it was made at. The later runs of pistols marked P1 and featuring the aluminum receiver have had less of a following and lower collectability. The model we received for the review was an Aluminum framed P1 model marked with a manufacture date of November 1980 as noted by the 11/80 just below the ejection port.

The market for quality Walther P1 imports is drying up and the prices even on the less desirable non war models is creeping up into the $500 to $700 range. Most of the imports that are on the market today are ex police or military models and come with the all-purpose massive black leather pouch and two single stack magazines. I’m a big fan of owning shootable historical guns, or guns that mean something in the time line of military conflict in the 20th century.

I have noticed after speaking with several owners of surplus Walther’s that they tend to be well lubricated, and have a fair to moderate amount of holster wear. Years of sitting in an unlined plain leather holster, being drawn and put away hundreds of times can cause the pistols to show some wear. Mostly this is on the outside of the guns, in our test model inside the rails and slide showed very little wear at all, just the faint tooling marks you expect from production.

During our range session with the Walther P1 we fed it a full complement of ammunition. It ended up being a mix of 115 grain full metal jacket ammo from Wolf, Fiochhi, Union Metallic Cartridge, and Remington. The pistol ran all the ammo we had through it and placed all the rounds in the Defense Targets, RST steel silhouette. The trigger is what we would expect from a weapon designed for combat use, its long and even and breaks the same way every time. Consistency is a great thing when testing any firearm, and even if you don’t like something if it’s consistent you will get better with it. That’s not the case here. The safety and other controls operate like I expected them to do, efficient and correctly, no complaints from me or our test shooters.

We hope you liked this look into the Walther P38/P1 pistol, its operational history and its innovative characteristics. The pistol is largely overlooked by many collectors but in recent years there has been a renewed interest in this pistol. We jumped at the chance to get one to look over and perform an extended test and evaluation period on. To date we only have 300 rounds through the P1 and we intend to make it a regular guest for our range sessions over the spring and summer. Stay tuned as we periodically update the article with new pictures and track it’s performance. We have included a final picture of the inside of the slide and frame when we first received the gun. Very little wear is shown when we disassembled it.