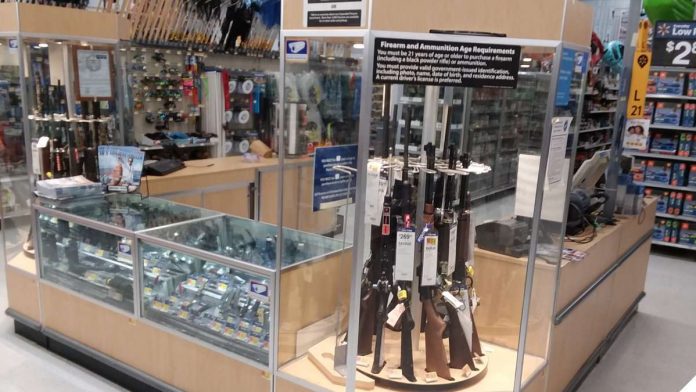 In response to a new gun control law, Walmart announced they will no longer sell firearms in the state of New Mexico. New Mexico Gov. Michelle Lujan Grisham (D) in March signed a bill sent to her the Democrat-controlled state legislature that requires a background check to be performed all virtually all firearm transfers in the state.

Although 29 of New Mexico’s 33 sheriffs joined in opposition to the measure, holding the proposal could trample on constitutionally guaranteed rights, the new law went into effect earlier this month and Walmart says they are calling it quits for gun sales in The Land of Enchantment as a result.

The problem, as Tiffany Wilson, Walmart’s Director of Communications, explained to Guns.com is that the new law mandates that a federal firearms licensee “shall not unreasonably refuse to perform a background check” for a prospective firearms seller who does not hold an FFL. This could set up a situation where customers come to the store to have a check performed on a gun that the big box retailer’s sporting goods staff is not trained to handle or ensure is safe while adding to the possibility that customers bringing in such guns to the store could lead to confusion.

“As a general merchandise retailer and grocer, Walmart is not currently designed to conduct background checks for private-party firearms transfers under New Mexico’s new law,” said Wilson. As such, “The company has decided to surrender its 34 federal firearms licenses and no longer sell firearms in our New Mexico stores.”

While many of the sheriffs have vowed not to enforce the law, New Mexico Attorney General Hector Balderas, a Democrat, issued a directive that the new background check law must be enforced. “As law enforcement officials,” Balderas said, “we do not have the freedom to pick and choose which state laws we enforce.”

As for Lujan Grisham, a former Congresswoman who was a reliable vote in Washington when it came to gun control, had the strong endorsement of groups such as Giffords and Moms Demand Action in her run for the Governor’s Mansion. Statewide last year, Everytown provided $400,000 to Dems running for office in New Mexico.