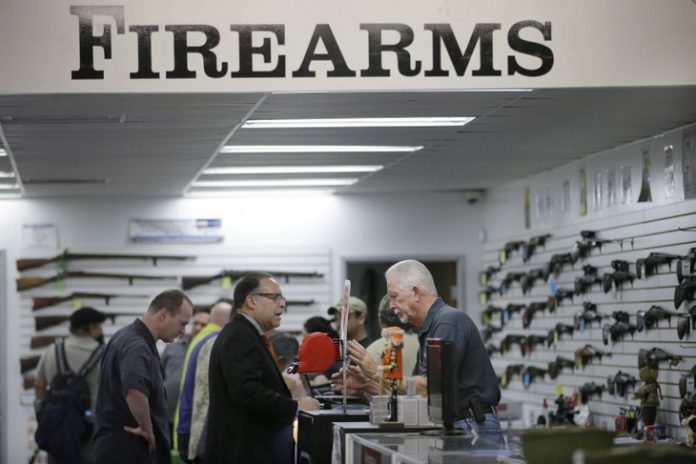 [Ed: This is such an important subject that we are reposting by permission Bearing Arms’ original article from June 24, minimally edited for DRGO.]

On August 10, 2018 Connie Wray’s daughter Katie took her own life by using a firearm. Katie was a former Marine living with her husband, also a Marine, when she decided to end her life. Wray had expressed on more than one occasion her fears to her husband that Katie had firearms in her home. Wray’s husband was not dismissive of these thoughts, however he would respond that they’re “professionals” when it comes to firearms, and it just comes with the territory. After the loss of Katie, Wray blamed “the gun”.

Wray and her family were consumed by grief. She opened up about the grieving process in a recent online post:

“. . . I played the ‘What If’ Game. What if I had called earlier that day. What if we had kept those lunch plans. What if they didn’t have guns in the home. That’s the one that has kept me up at night. With so much talk of mental health, mass shootings, combined with uptake in suicides, can two groups with very different philosophies find common ground to find solutions?”

In 2009 Michael Sodini’s longtime friend and president of the company they worked for died in a suicide by firearm. Sodini was in the firearm industry and he and the president had just come back from an extensive run traveling all over the United States on business trips. They were together 24-7 for months at a time. When Sodini’s friend took his own life, he and those around him were devastated. Were the signs there? Was there no outlet for his friend to seek other relief? Like Wray, Sodini became a survivor of suicide, and was left with more questions than answers.

In 2018 Sodini founded Walk The Talk America. The organization was born out of a chance meeting Sodini and a business associate had with a stranger they invited to chat with them:

Michael and his National Sales manager invited a stranger to join them at their dinner table. The conversation naturally shifted to gun violence in America. The young woman asked, “What happens when there is a school shooting?” Michael explained that one side blames the gun while the other side blames mental health. Because of this, unfortunately, nothing is ever resolved. The woman then asked, “Well, how do you as an industry work with mental health if you have identified the problem? It would make sense that the two industries work hand and hand.”

A spark went off in Michael’s head. All too often, firearms owners were foregoing mental health services for fear of losing their firearm rights, while many mental health practitioners lacked the training to properly serve members of the 2A Community. In July 2018, Michael founded Walk the Talk America to address the issue head-on.

Jake Wiskerchen, a licensed Marriage and Family Therapist, National Certified Counselor, and Chief Clinical Officer of Zephyr Wellness, had a good friend from college that managed his mother’s gun store and range in Reno, Nevada. They’d often talk about the relationship between mental health and firearms. In 2019 Wiskerchen’s friend one day recommended that he check out Walk The Talk America. At the time Jake was hosting a show on mental health and invited Michael Sodini to be a guest. The conversation went on for over three hours and a new friendship was formed.

Wiskerchen and Sodini started working closely together. Jake had said to Michael, “We need to bring this information [about mental health and firearms] to clinicians in the form of continuing education.” From there Wiskerchen developed a class for clinicians on firearm cultural competence to fill the void in addressing the two issues on the same stage. They also got involved in different programs like the “Governor’s Challenge” in Nevada, an organization aiming to prevent suicide. Through contacts they were building, Wiskerchen and Sodini found themselves as guests on the Crisis Support Services of Nevada podcast, Talk It Out Tuesday, this last March. The episode started out like this:

“Hello and welcome to Talk It Out Tuesday with Crisis Support Services of Nevada. I am your host, Connie Wray . . . “

I talked to Wiskerchen about how things went from point A to B to C. He told me it was rather organic through the network they made in the world of mental health. We discussed the Talk It Out Tuesday episode and he explained:

What transpired after that conversation was an amazing journey. Wray, having these visceral emotions and resentment for years, blaming the firearm on what had happened with her daughter, asked the Walk The Talk America team to teach her about firearms and take her shooting. Wray chronicled the process from beginning to end in her docuseries, The Next Stage.

Wray introduces the episode with:

“Guns and mental health, just saying these words together spark immediate controversy. I’m a mother who lost a child to suicide by firearm. It was easy for me to blame the gun, knowing little about the gun culture. When I heard about Walk The Talk America, a non-profit, bridging the gap between mental health and gun ownership, my head wanted it to be the solution, my heart was skeptical.”

Later on in the beginning of the segment, Wray did admit “I needed to blame her death on something.”

Wray was noticeably nervous when she was brought to the firing line at a range in the Nevada desert. She was given a crash course on firearm use, grip, and safety. Shaking with nervous energy, she held a .22 caliber pistol in her hands while Wiskerchen and Sodini instructed her. Directing Wray to keep her finger off the trigger during exercises, Wiskerchen gently guided her. She apologized a few times over, and said “Oh s*it” with anxious sighs whenever she inadvertently allowed her finger to creep into trigger guard.

She was ready for live fire and was handed a loaded magazine, Wiskerchen told her “There’s no special sauce to this, just look to where the bullet’s going to go and put it in that way.” Wiskerchen put her through another exercise after loading, showing her how the safety on the firearm functioned, having her attempt to pull the trigger on the pistol while it was engaged. They went live and after a few “holy s*its” Wray cycled through the magazine. Her response?

The team spent their time in the desert working Wray through a multitude of different firearms. Wray said that after getting over her initial fear “…they took me through a small arsenal shooting several rounds.” Then came what she called a breakthrough. Under the hot desert sun, tearfully she professed:

“I was just thinking about my daughter, it’s like I’m not so afraid. Like it was not the guns, you know? And I feel bad that I ever thought that. I was just so even more paranoid after she died you know, because I didn’t know anything about guns . . . I didn’t know I was going to get this emotional about it. But I feel like it’s not so scary, I was so scared. I knew it was her mental health but I didn’t put it all together. Cause’ I did used to say to him “we shouldn’t have guns in the house” . . . but it wasn’t about that, it wasn’t ever about the guns.”

Sodini and Wiskerchen were supportive of Wray’s catharsis. Put best, Wiskerchen said to her:

“The best way to fight lack of knowledge is education and experience.”

The work that advocates like Sodini and Wiskerchen do is incredibly important to the firearms community, and population at large. Knowing about Connie Wray’s story and the story of her daughter, we can only hope that with the help of the Walk The Talk America team, Wray was freed from the guilt ridden, self-imposed prison she was in, living as a survivor of suicide by firearm. Wray took a chance, summoning up insurmountable courage, and based off the experience, it seems that a large barrier has been removed, as well as a weight lifted. “Okay, that was fun!” she said, and with that a new healing can begin.

Walk The Talk America has important resources on suicide prevention, and as noted, aims to bridge the chasm between two worlds. Do visit their website: https://walkthetalkamerica.org/. If you or someone you know has suicidal thoughts and ideations, call the National Suicide Prevention Lifeline at 800-273-8255. Wray’s story is an important one and you’re urged to watch, as well as share with those you know, her story here.

—John Petrolino is a US Merchant Marine Officer, writer, author of “Decoding Firearms: An Easy to Read Guide on General Gun Safety & Use” and NRA certified pistol, rifle and shotgun instructor living under and working to change New Jersey’s draconian and unconstitutional gun laws. You can find him on the web at www.johnpetrolino.com