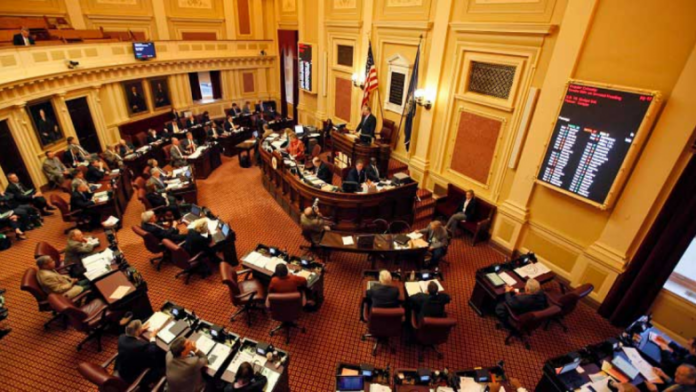 RICHMOND, Va. (WSET) — Virginia lawmakers in the Virginia Senate have passed three gun measures, sending to the House for consideration.

The three bills include requiring background checks on all firearm sales, limiting gun purchases to one in a 30-day period, and allowing localities to ban guns from public events.

SB 35, which would allow localities to ban guns from public events, actually would repeal the current law that restricts localities from enforcing ordinances that would prohibit the purchase, possession, transfer, ownership, carry, storage, or transport of firearms or ammunition.

SB 69, amends the current law, only allowing Virginia residents to purchase one handgun a month, or in a 30-day period.

And, SB 70 requires a background check on all private transfers of firearms.

All three bills were passed along party lines. – ABC 13

The Virginia legislature if fullsteam ahead on pushing gun control to Governor Northram’s desk. On the heels of banning firearms in the capitol in an ’emergency’ measure just ahead of the protest and rally this weekend, the legislature has gone whole hog on passing every cliche piece of progressive legislative filth under the tired and worn banner of “common sense safety measures…”

At this point I think its just in the bylines somewhere they have to say it. They aren’t even pretending that hard that these things will work, they’re just contractually obligated.

This whole thing still feels like a test run on buying out state legislatures with Bloomberg money and seeing the results if they go hard. The sanctuary counties in Virginia are a welcome pushback but it is looking more and more like the folks in Richmond are actually going to bring this thing to the wire and test the full measure of civil disobedience.

If you’re going to Virginia, look professional, be polite, and make the message is clear. No, rights are not up for negotiation. They are not to be penstroked into incontinence for no gain and superficial morality.