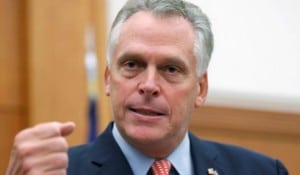 The move by the Republican-dominated Virginia Senate Courts of Justice Committee came just six weeks after Democratic Gov. Terry McAuliffe called for a host of gun control measures as part of his new public safety initiative debuted on the first working day following the second anniversary of the 2012 Newtown school shooting.

These were almost immediately panned by critics who promised a fight that seems to have been delivered this week.

“I am disappointed to see these common-sense measures to keep Virginians safe fall to special interest politics,” McAuliffe said in a statement. “Too many families in Virginia and across the nation have lost loved ones to gun crimes that these proposals could help prevent.”

Nine republicans control the 15-member committee. Most of the voting was by party line with state Sen. John Edwards, D-Roanoke, often crossing the aisle to vote with the GOP majority Monday. Speaking on both sides of the issue in general were the Virginia Citizens Defense League and National Rifle Association on one end and members from the Coalition to Stop Gun Violence, Moms Demand Action, the Virginia State Police and Virginians for Responsible Gun Laws on the other.

The list of bills that didn’t make the cut reads as a wish list for gun control advocates:

SB 694, mandating background checks for all guns sold at gun shows in the state was incorporated with SB 993, which had the same language and was defeated by a 6-9 vote.

SB 768, an expanded background check measure that would have made it a misdemeanor crime for anyone who is not a federal firearms licensee from selling a gun in Virginia, was killed 4-10.

SB 798 would have reinstated the repealed one-gun-a-month rationing scheme, voted down 4-10. A similar bill, SB 1178, that would have turned rationing back on coupled with expanded background checks to include private transfers, likewise failed.

SB 909, to prohibit those who have a restraining order against them from possessing firearms shot down, as with most of the other bills, 4-10. A similar bill, SB912, that would have mandated judges automatically issue firearms confiscation bans alongside emergency custody orders was stricken at the sponsor’s request.

SB 943 would have barred gun possession by those convicted of misdemeanor crimes of stalking, assault and battery of a family or household member, or sexual battery was rejected in a 10-5 vote. Voting on this bill was controversial and went back and forth before it was finally entered as defeated 5-10.

SB 1108 would have revoked the handgun permits of those who were behind on child support payments until they contacted the state Department of Social Services to remedy the delinquency failed 4-10.

SB1179, to make it a crime in the state to knowingly allow a child four years old or younger to hold a firearm, airsoft gun, or air gun was rejected. This legislation came after much outcry as of late after toddlers were shown holding firearms on social media. In meeting with the committee, the NRA’s lobbyist in the state, Anna Kopperud, decried the limit as, “an arbitrary age.”

SB1215 would have criminalized the sale of any item that contains any ivory, ivory product or rhinoceros horn was stricken at the sponsor’s request. These bills have earned the attention of gun rights organizations in recent years as it often affects the transfer of antique gun grips.

SB 1429, Virginia’s attempt at a so-called gun violence restraining order law, similar to a controversial one adopted last year in California and proposed last week in Congress deflated under a 4-10 vote by the panel. Gun rights advocates argued that the state’s current mental health laws are sufficient.

The CSGV was harsh in its criticism of Monday’s votes, posting to social media, “The Republicans and Virginia State Senator John S. Edwards (whose district includes Virginia Tech) on the Senate Courts of Justice Committee didn’t have the guts to look these Americans in the eye and vote ‘No.’ So they smiled, approved, and then served their National Rifle Association bosses in a cloakroom somewhere.”

The only anti-gun bill to pass out of the committee, SB 1191, which makes it a felony to possess a firearm on school property or a school bus with exceptions for law enforcement, passed with an amendment that the gun has to be “knowingly” rather than accidentally possessed.

A subsequent bill, SB 1132, that passed out of the committee by an 8-5 vote – the closest of the day – would allow some lawful concealed carry on school grounds. A third bill, SB 828, would have decriminalized carry altogether on both campuses and churches, was withdrawn.

In a sure sign to show which way the wind blows on the committee, three other pro-gun measures passed resoundingly. These included:

SB 689, to allow lifetime concealed carry permits in much the same fashion as lifetime hunting licenses in the state passed 10-5. Currently, licenses are valid for five years of which the state police report 355,166 active permits on file.

SB 1155, the only bill to pass with a unanimous vote, requires law enforcement agencies in the state to make every effort to return recovered firearms to their rightful owner as long as they are not a prohibited possessor and the gun is no longer needed for evidence.

Gun rights groups were pleased with the turn of events.