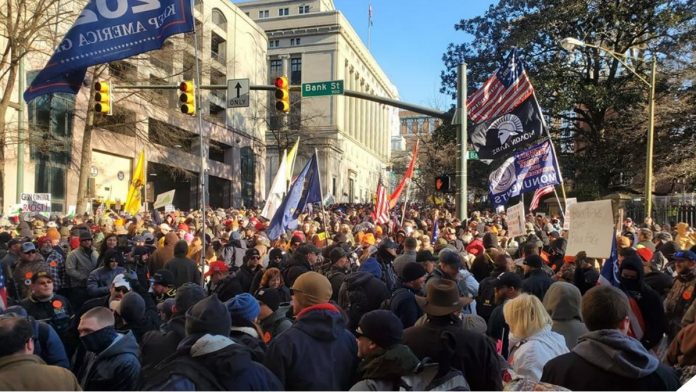 I believe President Washington would be proud of many of the attitudes in his state. As the government restricts arms, the people buy more of them.

HERE WE go again. In January, after President Biden promised to back stricter federal gun control measures, the Federal Bureau of Investigation conducted 4.3 million background checks nationwide for people who wanted to purchase a firearm. That’s a 79 percent increase over the number of background checks the FBI processed in January 2020—and an all-time record.

It was also the first January in NICS history that outpaced the proceeding December, usually the Christmas buying season produces a stronger month than the next one, but not this year. Not 2021.

The same thing happened in Virginia following the passage of last year’s raft of gun control bills, including a controversial red-flag law. After seven gun control bills were passed by the General Assembly last April and signed into law by Gov. Ralph Northam, Virginians bought even more guns. According to the Virginia State Police’s Firearms Transaction Center, a record 587,107 background checks were conducted in the commonwealth in just the first nine months of 2020.

It seems that the more lawmakers try to control guns, the more people buy them. But that didn’t stop state lawmakers from passing even more gun control bills this year. They include:

HB 1909, which would permit any school board in the commonwealth to designate non-school property it owns or leases a “gun-free zone,” with the exception of armed security guards and law enforcement officers. But simply declaring a “gun-free zone” doesn’t make it so. According to the Crime Prevention Research Center, 98 percent of mass public shootings in the U.S. since 1950, including dozens of school shootings, have occurred in places where it was already illegal for citizens to bring guns. This virtue-signaling bill was sent to a conference committee on Wednesday after the House unanimously rejected Senate amendments that changed the wording from “property” to “administrative building.”

HB 1992, which was passed by both chambers, prohibits the purchase, possession or transportation of a firearm by individuals who were convicted of domestic violence against a spouse or former spouse. An amendment by the Senate restores the individual’s gun rights automatically in three years if they do not commit another crime or if they are not subject to a protective order. Unlike feel-good “gun-free zone” legislation, this bill actually focuses on people who a) have already committed a violent crime; and b) have a stronger likelihood of violence in the future. But don’t be surprised if domestic abusers go out and buy more weapons before it goes into effect.

HB 2128 would increase the time the State Police have to do criminal background checks from three to five business days before a firearm is sold or transferred to a new owner. Giving the State Police two extra days to complete background checks is reasonable due to the high volume of gun purchases, which may very well increase if this and other gun control bills become law.

HB 2276, which passed the House on a 52–48 vote, would outlaw the sale or possession of plastic or 3-D printed “ghost guns” that can elude X-ray scanners, as well as “unfinished frames” of firearms without a serial number. Sounds good, but as an article in Reason pointed out, “the problem with imposing legal restrictions intended to stop a practice that is designed to evade legal restrictions is that you were outflanked before you even started.”

The magazine likened attempts to control homemade weapons to “the old Soviet regime trying to shut down the samizdat underground press by regulating copiers”—which, by the way, was a complete failure.

HB 2295, which was passed by the House, would make it a Class 1 misdemeanor to carry any firearm in the state Capitol and surrounding state-owned areas in Richmond, including parking lots, with the exception of law enforcement, court officers and active duty military. Even individuals who have lawful concealed carry permits would have to keep their firearms locked in their vehicles whenever they visited their legislators in Richmond or their weapons could be seized and forfeited.

Last year, Gov. Northam preemptively fenced-off Capitol Square before what turned out to be a peaceful rally attended by thousands of armed Virginians in defense of their Second Amendment rights. This bill would prevent such a demonstration from ever happening again, and perhaps that’s the point, since opponents of the bill correctly point out that while it turns Capitol Square into another “gun-free zone” for law-abiding citizens, it does nothing to prevent armed criminals from entering the area.

Passing more gun control laws may look like state legislators are “doing something” about gun violence. But if recent history is any indication, the result will just be more guns in the commonwealth.

We have seen this same scenario play out strongly across the whole of the United States, only blunted most effectively (and with a very charitable use of the term ‘effectively’) in states with long established and highly restrictive gun policies. Virginia is newer to the gun controller fantasies than locales like New York and California, but they are using Virginia as the inroad to civilizing the out-of-control ‘South’ as they surely see it.

What we are seeing are controllers unable to see that their dream of utopia is dead, it always was in point of fact but it has never been as obvious as it is right now. Gun control is dead, it just doesn’t know it, and nobody who espoused its inherent moral rightness is going to give that up easily, especially if they can still wring some political capital out of the topic. Like the slow death of the war on drugs, the war on guns will either come to an end or it will boil over.

Weapons are part of the human experience, and one of the most fundamental human rights in a civil and uncivil world alike. Weapons grant autonomy, they allow a response to encroachment upon a person’s or a community’s rights can be met with force when words and agreements fail, for history is filled with examples where parties do not negotiate in good faith.

The gun controllers, and many more beside them, continue to insist that all folk can be reasonable (in an often, ‘so long as they think like we do’ kinda way) but we have seen the hollow nature of that process on both sides of the aisle. It is mostly clearly illustrated in the ‘woke’ and cancel culture narratives but we have seen ‘wrong think’ quashed in just about every group. Not disagreed with, not debated, outright ostracized. It is something that needs to stop if we are to begin building faith in ourselves and our governance again.

That, more than anything else, spells the failure of gun control. It doesn’t matter that the Democrats own the White House and Congress for the moment, not enough people within even their own voter base trust them enough. Faith in even the elected folk we voted for is scant, faith in media outlets to be impartial is nearly non-existent, and with ample evidence for both.

But they’re gonna ‘Weekend at Bernie’s’ the concept until it is rotten and gone, even then someone will still be talking to the skeleton of gun control like it is alive and working.

So, I suppose, let them keep talking. We keep saying no, and keep buying guns.