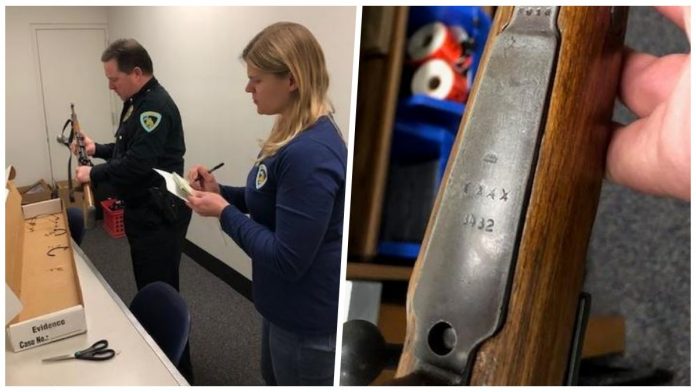 The Mauser went missing from the bed of its owner’s truck almost five decades ago. (Photos: Madison Police Department)

In 1973, a hunter discovered his rifle had been swiped from his truck. This month, the gun is now on its way back home.

A detective in Circleville, Ohio last month reached out to police some 500 miles away in Madison, Wisconsin about a Mauser bolt-action rifle whose serial number jibed with one that had been reported stolen three decades prior. The firearm had been gone missing from a 1966 GMC pickup, where the 41-year-old victim had left it beneath a blanket in the truck’s bed. The crime occurred at the 200 block S. Baldwin St, which, then as now, is a residential area.

Soon, the rifle was on its way back to Madison, where police there discovered, sadly, that the unnamed owner of the Mauser passed away in 1998.

“However, his children are still alive, and are being contacted 47 years after their dad reported the crime,” said MPD in a statement. The Kar 98-style Mauser, such as seen in this file image from the Guns.com Vault, was produced by the millions in Germany through 1945 while similar pattern bolt-action rifles were made in Belgium, Czechoslovakia, and Yugoslavia, among others. They have been popular as collectibles and sporting rifles for a century.