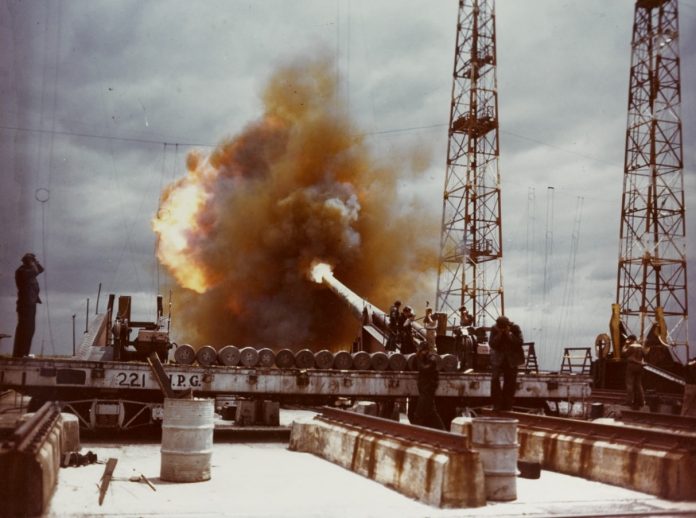 The Naval Proving Ground in Dahlgren, Virginia was established in 1918 and has been testing ordnance for the fleet ever since. We found a great series of original color photos taken at Dahlgren during World War II showing the big guns at work.

“14-inch gun fires a test round down range, during World War II. Gun crewmen are covering their ears with their hands for noise and shock protection.” (All Photos/Quoted Captions: Naval History and Heritage Command)

“Five-inch gun makes a hit on an armor plate target, during World War II ordnance testing. This test does two jobs in one, checking gun and armor in the same operation. Note flashes made by gunfire, and by the projectile striking the armor plate.”

“Firing an eight-inch, 55-cal. Gun, during tests in World War II. This is a triple, single sleeve gun mount, with the right barrel removed. Shells on the stand in the foreground are of about 16″ size, possibly for the 16″ gun at right.”

“Tracer bullets from a twin 40mm machine gun mount arc across the sky, aimed at targets in the Potomac River, in a test of both guns and ammunition during World War II.”

“6”/47 triple mounted guns, destined for one of the navy’s new light cruisers, suspended from a mobile crane at the Dahlgren Proving Ground, while being prepared for shipment. Photographed prior to August 1943.”

“Large-caliber gun fires another round, during the continual testing carried out during World War II. Note second big gun at left, and shells on ground in the center foreground. “

Of note, lots of women, dubbed “Women Ordnance Workers,” or WOWs, clocked in at Dahlgren during WWII, something to keep in mind when you see tour a warship of the era that has been turned into a floating museum and remark at the big guns with, “they just don’t make ’em like that anymore.”

“A woman ordnance worker (or “wow”) writes down data from a sister employee concerning the 3″/50 D.P. gun they have been test firing. Several other 3″/50s are also present. Photographed prior to August 1943.”

“Workers test fire a 20mm aircraft machine cannon. A woman ordnance worker (or “wow”) takes notes on the gun’s performance as the male worker controls the gun with a remote firing key.”

“Netherlands-born Mrs. Catherine Melker, the 58-year old former dress designer and teacher, is one of the most ardent and hard-working “WOWS’ at Dahlgren Proving Grounds. She is greasing bullets for the test-firing lines.”

Named in honor of Rear Admiral John Adolphus Bernard Dahlgren, considered by the Navy to be the “Father of American naval ordnance” the Naval Proving Ground started testing weapons in World War I.

Dahlgren’s guns were known after the conflict as “The Gun that settled the dispute,” as evidenced by this image of 11-inch Dahlgren smoothbores in an artillery park, probably at the New York Navy Yard, sometime after the Civil War.

Known today as Naval Surface Warfare Center Dahlgren Division, the installation is still going loud by testing ordnance and engineers based there recently earned recognition for their work on laser weapons systems and the Hypervelocity Gun Weapon System.

Below is a highlight reel from a couple of years ago showing some more modern weapons being demoed at Dahlgren.