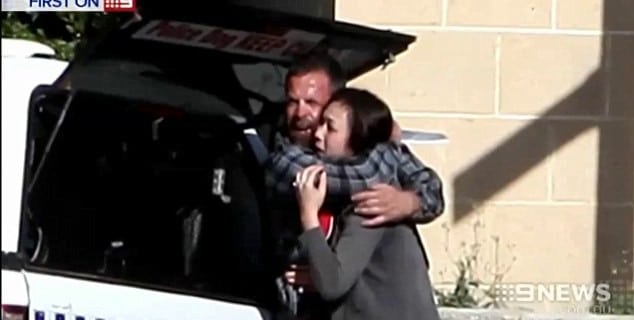 Police have released the name of the man who allegedly armed himself with a knife on Saturday and took a delicatessen manager hostage before police shot him dead.

Brendan John Lindsay, 38, entered The Lunch Club delicatessen in Carlisle, Perth and grabbed a knife from behind the counter on Saturday morning.

He then took the store manager, known by locals as Sheila, outside and held the blade to her throat, while threatening to kill her. Sheila, 37, suffered stab wounds to her neck and was also hit in the leg with a bullet during the incident while Lindsay was shot dead by officers at the scene.

Shocking footage captured by a witness and aired by Nine News shows the man holding his hostage tightly in a headlock with the knife close to her head. An exchange between him and police can be heard, with one officer trying to negotiate with Lindsay saying ‘Tell me what you want and I’ll try and do it for you’.

Lindsay was screaming ‘Get back! Get back!’ at the officers while Sheila yelled ‘Let me go! Let me go, please!’
Officers were forced to shoot him when he began stabbing his victim. Witnesses described the chaos and terror of the scene, describing how Lindsay had threatened to cut the woman’s throat. ‘While I was in there this chap came from the front, bolted into the shop, grabbed knives then grabbed the boss and took her outside … and threatened her, local Donald McCaw told the ABC.

‘Then he took her outside and they were trying to quieten him down, trying to stop her doing anything, any harm,’ he said. ‘He said I’ll cut her throat, and everyone was around and they tried to talk him out of it, but he wouldn’t.’

Police arrived at the scene and shot at the man, firing between six and eight shots. Mr McCaw said ‘They [the police] were lucky to get shots in I think.’