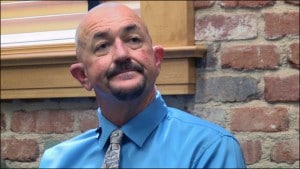 Kent Williams, according to his attorney, was unlawfully arrested last week by Bakersfield PD and is now seeking the court’s help in salvaging his reputation. (Photo: bakersfieldnow.com)

Williams, holder of a concealed carry permit from the county sheriff, was arrested Aug. 28 after Bakersfield police found out he had a handgun in a bag on school grounds. While school authorities quickly placed Williams, an educator with some 27 years experience on administrative leave, Bakersfield PD placed him in handcuffs and locked him up in the local jail. However, once officials discovered that Williams had, in fact, not violated the law, he was released from jail without being charged and is now pursuing filing a lawsuit for false imprisonment against the police department.

“It was an illegal arrest,” attorney Daniel Rodriguez, retained by Williams, told Bakersfield Now. “They say, ‘Hey, we get a free pass, because we made a mistake. We were ignorant of the law,’” he said. “Ignorance of the law is not a defense. The same goes for the police.”

While possession of a gun within 1000 feet of a school in the state is generally illegal, there are exemptions for law enforcement and concealed carry holders. According to a reference on the Gun Free Zone Act maintained by the Calguns Foundation, a California-issued concealed carry permit “allows permit holders to legally carry their listed handguns on both K-12 and college/university properties and campuses.”

The gun rights group is quick to point out that while it may be legal, it does not protect a student or employee from “administrative or job disciplinary action if the school prohibits carry for those groups.”

Williams, detained for six hours before being released, is still on paid leave from the Panama-Buena Vista Union School District who oversees Tevis Junior High. An Aug. 29 statement, signed by Kevin Silberberg, district superintendent and posted by a school board member to his social media account, named a successor to Williams’ position at Tevis.

“Even though the Bakersfield city police rescinded the arrest, Panama-Buena Vista Union School District policies were violated,” reads Silberberg’s statement in part. “I can confirm Mr. Williams has been placed on indefinite administrative leave, which is a matter of protocol and law. All action taken will be based on facts, the law, and our unwavering commitment to ensure campus safety.”

Meanwhile, the community is rallying behind the now-controversial educator. No less than two Facebook pages have been set up in recent days to organize support with posters making plans to attend local school board meetings to voice their feelings about Williams.

For his part, the long-term educator, who admitted he carried on school grounds to have the capability to protect himself or his students if needed, just wants his reputation back.

“I would like to establish my name and get my credibility back, as well as teach or be an administrator where I can take care of kids, like I have been doing for 27 years,” Williams said.

Rodriguez said he currently does not intend to file suit against the school district, providing Williams be reinstated.