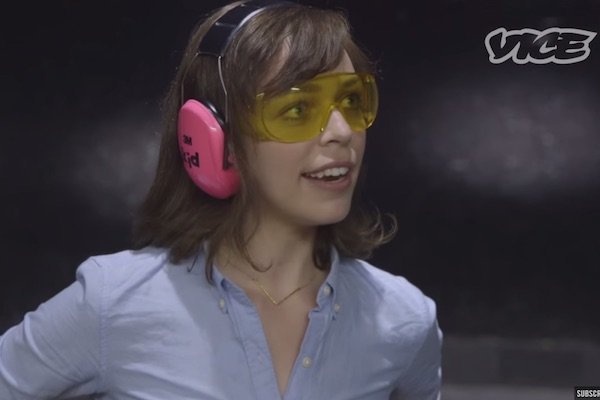 [Ed: On May 2, DRGO received an email from a VICE reporter who said “I would love to tell you more about what I am working on and to hear your thoughts“ about a proposed documentary about “firearms and dementia”. Dr. Przebinda, our Project Director, replied offering to talk. No response. So I sent the longer reply below on May 9, taking the opportunity to point out some of the shortfalls in a documentary about women shooters, provided as an example of VICE’s work: Fear and Loading: Meet the NRA’s Most Wanted Customer. Still no response. but we always hope to educate someone a little bit more.]

Glad you contacted us. We are always interested in communicating the facts about responsibly armed Americans who value the Second Amendment. I am replying on behalf of Dr. Przebinda and myself.

DRGO’s position on dealing with dementing gun owners is that families and caretakers, advised by their doctors, are responsible for ensuring relatives’ safety in every way, including by deciding whether to restrict access to firearms, cars, sharps, gas stoves, etc.—just like they should do for children. Is there any good reason to pass laws intruding in such private matters? No. How often do we hear about an elderly person with dementia shooting someone when there was no one previously in a position to have intervened?

I reviewed the video you linked Fear and Loading: Meet the NRA’s Most Wanted Customer.  You clearly presented “both sides” of the question about women choosing to learn to shoot in order to protect themselves. It is unusual to see media present the pro- side first or at such length, and I am impressed by that.

Yet I also noted all the unchallenged misinformation included in the following segments with Susan Nelson:

1.  Manisha Krishnan’s comment: “The NRA says to women that having a gun in your house will stop you from getting attacked.” You must know that’s not true. Having a gun (and knowing how to properly use it) is a way to defend against an attack. It won’t prevent one, and no one says that. (The converse is that labelled public “gun-free zones” do invite attackers, while places where people can carry almost never are attacked.) Of course, Nelson’s response is a complete non sequitur, telling her moving story of being shot years ago. But living “with a bullet in my brain” confers no expertise on public policy, let alone on firearms she has never learned to use.

2.  She adds “More than likely, a gun’s going to be taken from you and used against you.” That’s absolutely the opposite of reality. It’s happening to her, again, is no reason to consider her knowledgeable about the subject. See “Myth: Guns are not effective in preventing crimes against women” with it’s well-footnoted references.

3.  “Studies that show women successfully using a gun in self-defense are few and far between.” On my desk is a book I recently reviewed for DRGO: #MeToo: Women Who Shot Men in Self-Defense. That includes 257 incidents, nearly all from 2015-2018, derived from media reports. The greater likelihood of women being killed than successfully defending themselves is based on the fact that many more men have firearms than do their victimized female partners. Being “murdered by a gun” is no more murdered than by any other means, and only firearm possession and the skill to use it can equalize women’s chances against bigger, stronger, more aggressive males who mostly kill women by other means. About 75% of women killed by partners in domestic violence happen after they’ve left the violent partner. That is exactly when the women should have been armed. (Obviously, leaving is the first most important step.)

4.  “Gun safety reform” is a gun control meme that has nothing to do with “gun safety”, which is actually about how you use a gun, not restrictive laws that dictate peripheral actions, e.g., storing it locked in one room with ammunition locked elsewhere. That’s typical and makes firearms useless in an emergency.

5.  Krishnan states that “Texas has some of the loosest gun regulations  in the country”–as if that’s bad. How about, alternatively, “some of the most reasonable”. Yes, a Constitutional right that “shall not be infringed” clearly must limit gun control regulations. Training is highly desirable, but exercising a right can’t be contingent.

6.  Krishnan says: “FBI data, women are 100 times more likely to be fatally shot by a man than to actually use a gun in self-defense.”  That’s entirely a result of who has the gun and the willingness to use it. Just having a gun in the home does NOT make it dangerous, and the early pseudo-research claiming that was long ago revealed as invalid data being manipulated into those conclusions.

7.  Krishnan’s repeated reference to “the gun lobby” is disturbing. That lumps together half the American population, rights advocacy groups like NRA and many others, and the firearm manufacturing and training industries. “Gun lobby” has become an anti-gun meme that demeans all the people trying to protect their rights and their families from others who are ignorant about firearms and want to believe that laws restricting possessing and bearing guns would make any difference. Good research has shown that’s not true.

8.  “Can women stand up to a $51 billion a year industry?” Excuse me, but that statement is utterly sexist. Women are for good reason (along with minorities) the fastest growing segment of our population choosing to own and use firearms. Women are also “the gun lobby.” “Targeting women because we’re weak and they’re going to save us” . . . that doesn’t even make sense. Gun rights organizations exist for one reason–not money, not “influence”, except in order to protect the imperiled civil and Constitutional right to keep and bear arms. If that were better respected, there’d be no gun rights “lobby”.

So, I am still concerned about the inaccuracies of that piece about women and guns, but recognize that it came out somewhat better than many. I’d be glad to talk with you about the possibility of an interview.

Again, thank you for reaching out to us!