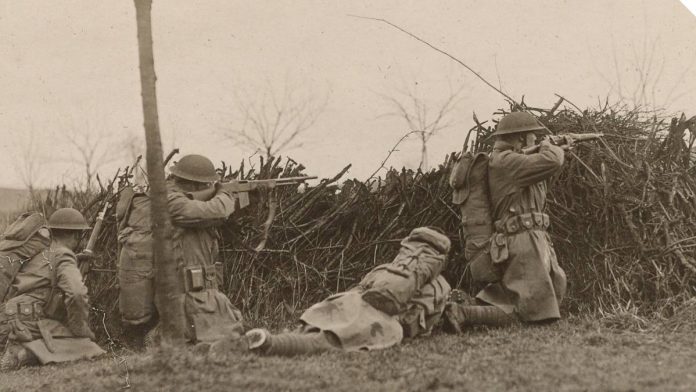 Men of the U.S. Army’s 16th Infantry Regiment in maneuvers as part of the Army of Occupation, Otzingen, Germany, in 1919 while the Treaty of Versailles was being negotiated. The victorious Allies would continue to occupy parts of Germany after WWI ended through the 1920s. Note the M1903 Springfield rifles and a newly-issued M1918 BAR (Photo: Library of Congress)

With the 100th anniversary of the Treaty of Versailles, there is no better time to remember the Americans who served in the trenches of World War I and the guns they carried.

The U.S was keen to stay out of the Great War, which was generally seen as a conflict among two different spheres of European powers. Then, on April 6, 1917, America formally declared war on Imperial Germany and joined Britain, France, and Russia in the global conflict.

By June 2017, the first U.S. troops were on the ground in France and, by the following October, some 2 million Soldiers and Marines were serving “Over There.” By the time the war finally ended, and Germany signed a final peace treaty at Versailles, France, on June 28, 1919, some 50,000 of them had lost their lives in combat. The personal weapons carried by those men into the trenches varied.

The U.S. Army and Marines entered the conflict in 1917 with their standard infantry rifle being the M1903. First put into production in 1907, the .30-06 caliber bolt-action rifle was produced at Springfield Armory and Rock Island Arsenal to a design very close to that of the DWM Mauser Model 1893. Using a five-round integral box magazine that could be rapidly recharged by a stripper clip, the standard 10-pocket cartridge belt carried by a GI or Devil Dog of the era held 100 rounds, a canteen, field dressing, and bayonet. Using a 24-inch barrel, the M1903 weighed in at 8.7-pounds and went 43-inches overall. The design would continue to see service in WWII as well as, in lesser use, as a training, line throwing and drill rifle decades after.

The M1917 Enfield, seen in an exploded display at Eddystone in 1918, was made by the millions in the Great War (Photo: Library of Congress)

While the M1903 was an excellent weapon, the entire U.S. arsenal amounted to just 800,00 of those standard rifles when the country entered the war. To help outfit the millions of men drafted and rushing to recruiting offices from Brooklyn to Petaluma, the War Department turned to Remington, Winchester, and Eddystone to produce a substitute rifle. Based on the British Pattern 14 Enfield and redesigned to the U.S.-standard .30-06 cartridge, the new weapon was designated “U.S. Rifle, Model of 1917, Caliber .30” but was more commonly known as the M1917 Enfield or American Enfield. Some 2.2 million of these guns were produced in a very short time, and, in the end, more Americans carried an Enfield into combat than an M1903. After the war, Remington continued to make the M1917 as a commercial hunting rifle, the M30, for decades. Not bad for a substitute.

This M1911 Colt WWI commemorative model recreates the standard GI .45 of the Western Front, right down to the United States Property rollmarks

Typically considered to be John Moses Browning’s most enduring legacy, his Model 1911 Government Issue semi-automatic handgun had been adopted by the War Department three years before “the lamps went out all over Europe.” Using a 7-round single-stack magazine, the single-action long slide was first produced by Colt for the military and commercial market and Canadian troops carried them into combat in 1914 even before the Americans entered the war. With a 5-inch barrel and long sight radius, the M1911 proved well-liked and continued to serve until it was replaced in 1986 by the M9, a military version of the Beretta 92F 9mm. Today, some 98,000 M1911s are still held in the Anniston Army Depot, enduring winners of two world wars.

Both S&W and Colt made .45ACP revolver models for the war effort as well, as part of the drive to knock out the Kaiser

As with the case of the Springfield shortage and Enfield substitute, numbers of Colt M1911s were not enough in 1917 to provide the rapidly expanding U.S. forces with sidearms. This sparked both Smith & Wesson and Colt to provide revolvers to Uncle to help fill empty holsters. Colt revamped their 1909 New Service Model revolver while Smith & Wesson updated their Hand Ejector revolver to accept rimless .45ACP cartridges using three-shot “half-moon” clips. Both guns, while very different internally, were dubbed the Model of 1917 by the War Department.

In remembrance of the servicemen lost to the Great War, the anniversary of that conflict’s Armistice Day, Nov. 11, 1918, is still carried forward today as Veteran’s Day. The last known American veteran of WWI, Frank Woodruff Buckles, died in 2011 at age 110. He was buried with full military honors in Arlington National Cemetery very near the grave of General John J. Pershing, who commanded the U.S. Army in France during the war.

A student officer at Fort Sheridan in 1917 maintaining his M1903. Of the more than 4 million Americans that served in the conflict by the time the Treaty of Versailles was signed, 53,402 would die in combat. (Photo: Library of Congress)