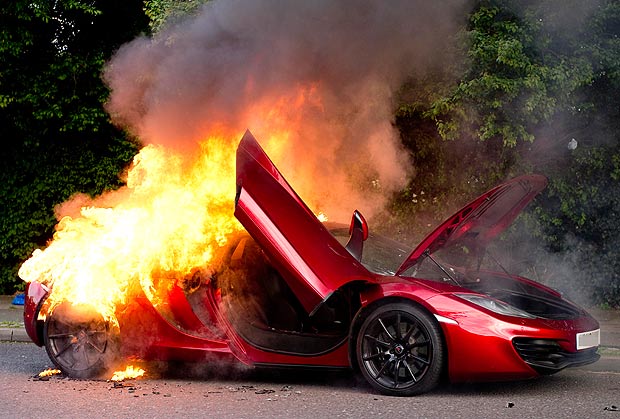 [Ed: And now for something not completely different. Going armed is fundamentally simply being prepared for dangerous emergencies; so is being equipped to fight fires. I’ve put out a couple of auto fires, and our author has stopped three or four. This is a more common hazard than most think, and deserves attention by all guardians and sheepdogs. Pictured is a McLaren — man, that hurts!]

Disclaimer:  I am not an auto mechanic, but have read the daily newspaper for over a half a century, and believe I have useful insights into the causes of auto fires.

I fought my first auto fire in 1981 while living in Madison, Wisconsin.  A battery in a woman’s car had exploded, and the entire ground under her car was burning, due to the battery acid.  She had run to a nearby apartment complex to ask that the fire department be called  (this was before we all had cell phones). At that time, the only equipment I was carrying was a 5-BC fire extinguisher.  Nonetheless, with this and the help from two other motorists who also had small extinguishers, we were able to extinguish the fire before the fire truck arrived.

In my opinion, there are three causes of auto fires:  1) electrical problems, 2) crashes (the most common cause), and 3) debris on the road that punctures the gas tank.  Recently, in the city where I live, a 2-year old was riding in her car seat of her grandparents’ car on an Interstate when debris punctured the gas tank and the car burst into frames.  A motorcycle policeman amazingly smashed the side window with his elbow, and pulled the grandparents to safety.  A female veterinarian driving by rescued the child, despite the smoke and flames, but sadly, the child died a few days later in a local hospital.

How common are car fires?  Here are the facts from the National Fire Protection Association:

If you are serious about being a volunteer first responder to car fires, I recommend being equipped as follows:

A quick review:  What do “A, B, C” ratings mean?  Here are the “official” definitions:

— Warren Lind is a retired licensed clinical social worker and a full-time security officer who writes extensively about crime, survival, and self-defense.  He a long-time CCW holder and is a member of too many pro-2A organizations to list.