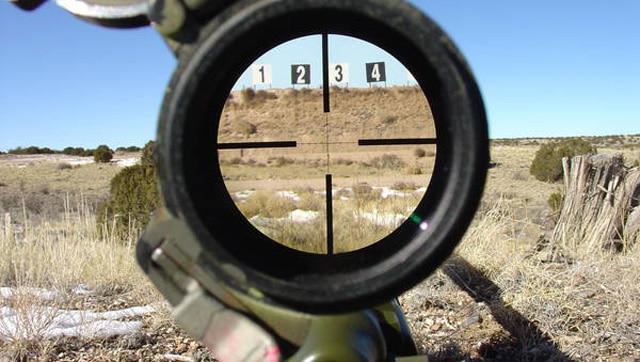 So many scopes on the market today are outfitted with a Mil Dot reticle, but are people using them to their full potential? The answer is probably “no.”

The Mil Dot reticle can be used for multiple purposes that includes range estimation, shooting using “hold overs,” compensating for the wind, leading a moving target, and probably a few others that I’ve failed to mention. But we’ll limit this guide to using the reticle for range estimation.

Before using it for estimating range a key feature must be recognized first. Does the scope have a first or second focal plane? Without getting into all the details and differences between the two, there is a quick way to tell.

Which is better? Well that’s completely different article, however, there are good arguments for both sides. It all depends on what you are using the optic for. The important thing to take away is that a first focal plane scope can be used for range estimation at any magnification setting whereas a second focal plane scope can only be used at one particular setting — typically the scope’s maximum setting.

There are a couple of different formulas used in range estimation using a Mil Dot reticle, and instead of explaining “how” each of them works, I will simply explain the formulas. Although they may appear complicated on paper, they are very easy if you use a calculator.

1. Take the size of target in inches and divide it by 36, then multiply by 1,000, and then divide the total by how many Mils the target reads inside the scope. That answer will be the range to the target in yards.

2. I’ve also found another formula that works well for estimating range. It’s involves taking the size of the target in inches and multiplying it by 27.78, and then dividing by the number of Mils the object subtends in the scope.

Before putting it to practical use

I’m by no means a math genius, but I do know that these formulas work. There are however some key considerations to keep in mind. If you’re not square to a target that you’re trying to Mil, the target will seem smaller than it’s true size and will appear farther away. Try to get as close to a 90 degree angle as possible.

Also, mirage distorts the targets edges and can make range estimation a bit tricky. The key to it, like most things, is practice! Take a laser range finder out with you to the range. Set some targets out and use your Mil Dot reticle, formulate a firing solution and then cross check it with the laser range finder. You’ll be surprised how useful those little dots in your reticle can be!