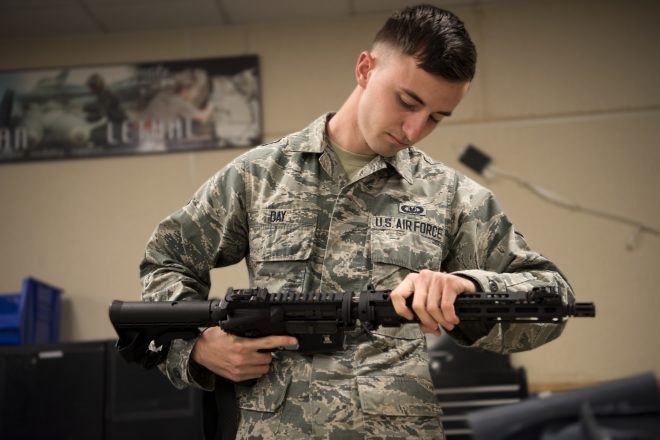 The U.S. Air Force recently highlighted the new Aircrew Self Defense Weapons that make up part of the survival kit pilots would rely on should they have to eject.

The compact modified GAU-5/A rifles, which have folding pistol grips and a quick-detach barrel/handguard, have been in development for the past several years and are a component of a 40-pound bailout set that includes flares, a flashlight, a life raft, medical and survival modules, noted the Air Force earlier this month. The guns can be quickly assembled and are packed with four, 30-round 5.56mm magazines.

“Survival kits are there to make sure our aircrew have everything they need should a bad day occur,” said Master Sgt. Mark Caron, with the 366th Operation Support Squadron, supporting F-15E Strike Eagle units at Mountain Home Air Force Base in Idaho. The 366th trains and outfits aircrews for what the military terms survival, evasion, resistance, and escape– in short, keeping bailed out pilots alive on the ground in often unfriendly areas until they can be rescued.

For decades, the military issued various revolvers and pistols to aircrews but in 2017 began to switch to the modified GAU-5, a rifle the Air Force has fielded in one form or another since Vietnam. “Having this self-defense weapon rather than a handgun greatly improves an aircrew member’s ability to survive if they are ever stranded and engaged in a fire-fight,” said Airman First Class Zack Day of the 366th.

Providing more details on the handy rifles, the Air Force’s Alaska-based 673rd Security Forces Squadron last month also posted several photos of the newest variant of the GAU-5 as the guns were shown off to F-22 unit commanders with a note that the guns, “will increase the firepower of our pilots if they ever have to eject over enemy territory.” The USAF Aircrew Self Defense Weapon shown together, top, and taken down, bottom (Photos: USAF)

The ASDW must stow inside a 16 x 14 x 3.5-inch ejection seat compartment, according to a June 2018 Air Force Times report. The guns get that small due to the use of an M4 style collapsible stock, flip-up backup iron sights, an Israeli FAB Defense AGF-43S folding pistol grip, and a Cry Havoc Tactical Quick Release Barrel (QRB) kit.

Cry Havoc, which confirms their QRB is being utilized by the USAF,  has demonstrated that guns with their barrel kit installed can be assembled and fired in under six seconds.

Joseph Trevithick with The Drive writes that the ASDW has the same 14.5-inch overall barrel length as the standard M4 series. The guns are not the first rifles to accompany USAF aircrews. Going back to the 1940s, the M4 Survival Rifle and then the M6 Air Crew Survival Weapon– the latter a double-barrel break action .410 shotgun over a .22 Hornet– were included in the bailout kits on several aircraft. Those guns, removed from service in the 1970s, are now considered museum pieces. Armalite’s AR-5, a floating semi-auto rimfire rifle that could be stowed inside its own buttstock, was adopted as the M1A but never put into production, leading the company to produce it for the commercial market as the AR-7. Likewise, the M6 has also gone on to be produced commercially in various configurations. The Bushmaster Arm Pistol in 5.56mm was another planned Air Force survival gun that made it about as high as a lead balloon.