It does not take an advanced student or collector of WWII arms to notice something: every nation had its own approach. Before the war, the US was the most committed to high-tech across the board. A quick look at the others’ wartime technology and production makes that clear:

Now, the state of the small arms art at any time in history and any place on the planet’s surface depends on the state of certain enabling sciences, to include: metallurgy and propulsion chemistry, and certain industrial capabilities, to include machine tools, such alternative metal-forming technologies as stamping/pressing and welding, and even alternative materials to traditional steels. These technologies tend to be similarly advanced everywhere and national differences are more a matter of industrial organization and incentives than cultural characteristics or unique national expertise.

In the 1920s, small arms designers reacted to the trench warfare of the Great War along two major trendlines: increasing individual firepower and lightening high-firepower weapons to enhance their portability. The standout weapons concepts of World War I were the pistol-caliber submachine gun and the light man-portable MG as exemplified by the Lewis Gun and the late-war entrant, the Browning Automatic Rifle.

Firepower could annihilate troops in the open, everybody learned for the second time in a lifetime (the first being the US Civil War where Napoleonic mass-formation tactics met rifled individual weapons and cannons, to the detriment of the men comprising those mass formations). And so three courses of action increased infantry firepower: adding submachine guns, lightening machine guns and distributing them further down the unit Table of Organization & Equipment, and — this last was not really tried in the Great War — replacing the standard turn-bolt rifle with a semiautomatic weapon. In 1918 that was a very forward-looking idea, but by 1928 most of the world’s major armies were looking forward like that.

The British disdained the semi-auto although they did follow the other two paths, and, when war broke out, they went in for submachine guns in a big way. But they had the glassy-actioned, rear-locking Lee Enfield rifle: the smoothest-operating and fastest-firing of the 19th Century turnbolt magazine guns. They believed that they could generate quite enough power as it was, and wouldn’t replace the Enfirld until after Suez. (Firepower buffs everywhere, too, were opposed by logisticians, commanders, or just plain cheapskates, concerned about ammunition wastage).

The Japanese had many other issues, but they concentrated on light, fast-firing machine guns for their firepower boost. They never encountered semiauto rifles, and never felt outgunned, until the Solomons campaign in 1942-43, which producrd a crash program to copy the US M1.

The US and the USSR both spent the inter-war period developing semiautomatic battle rifles, with prototyping consuming the 20s and early 30s, and by coincidence both armies adopted semiauto weapons in 1936: the US, the M1 Rifle, and the Russians, the Simonov AVS-36. The Simonov yielded to the very similar Tokarev SVT and AVT-38 (the first letter of russian nomenclature “A” meant a select-fire weapon, and “S” was a self-loader; “V” stood for vintovka, rifle, and the last letter was the initial of the chief designer). The SVT was improved into the SVT-40, but its performance in the Finnish Winter War was disappointing. Meanwhile, the Great Terror claimed the Red Army’s modernization advocate, Marshal Tukhachevskiy, in 1938 (along with almost every colonel and general in the Army).

The principal problem of the Tokarev rifles is failure to extract. There’s no primary extraction, and a pitted chamber takes a death-grip on case necks, usually leading to case separation. The SVT-40 had a fluted chamber to assist in extraction, but it only works if the gun’s never had a chance to corrode. The Russians reverted to their ancient Mosin-Nagant bolt action rifle, although they did keep issuing the Tokarevs to elite troops, such as Naval Infantry, that they thought could handle the maintenance duties.

That left the USA alone in fielding a semi-auto battle rifle at the outset of the war. (Springfields were retained for grenade launching and sniping at first). The M1 did not come into service without controversy. It had a considerable teething period and needed a number of modifications to become the weapon George Patton remembered as “the greatest battle implement ever invented.” A belated challenge by the Johnson M1941 Rifle was unable to unseat the then-established M1 from its perch, although Johnson weapons saw some combat with special units. It’s worth noting that the challenge came, not from a resurgent Springfield 03 or other manual action rifle, but from another semi-auto. This was one of the first solid indicators that the day of the bolt action was over forever.

The US also fielded the M1 Carbine for troops that had been previously armed only with pistols, like vehicle and weapons crews. In addition, there were submachine guns (M1928, M1 and M3) and the Browning Automatic Rifle, the squad’s bedrock base of fire. These weapons gave the US a significant battlefield firepower advantage, and while it took poorer countries decades to act on it, no one took bolt-action battle rifles seriously again after 1945.

The Germans hastily fielded semi-auto rifles and the revolutionary MP44 (and many other designations) assault rifle, but those weapons never replaced the Mauser 98 in the hands of Germany’s millions of troopers. The Russians continued to work during the war on semi-automatic and assault rifle concepts, and fielded the SKS at the close of the war.

Ironically, the Germans had access to two serviceable semi-auto designs that had been well-developed between the wars by French and Belgian designers, but they didn’t produce them. They also had access to Czech semi-auto weapons research from the time of their partition of that “land far away and a people of whom we know nothing,” but didn’t exploit it — they only ran their occupied factories overtime making the guns they’d been making for their original masters.

While some wars would be fought with bolt-action rifles (like the Israeli war of independence in 1948 and Sinai campaign of 1956), after VJ Day everyone understood that the infantryman of the future would, like the American of the time, best stay focused on his target and let his rifle handle the work of reloading. It was the culmination of a trend that began when someone invented the paper cartridge to speed reloading muzzle-loading muskets, and that leads on into a future unknown: perhaps a directed-energy weapon that is always ready to fire instantaneously? Should that come, it would be the next milestone in liberating the grunt from the administrative drudgery of preparing the next shot. Until then, the self-loading rifle is the last milestone. (Auto weapons having a niche of their own; we’re talking about deliberate aimed fire here).

So in 1945 the US was ahead of the rest of the world in fielding exclusively self-loading combat rifles. By 1960 the rest of the world had caught up (and you could argue that the Communist bloc, having adopted and standardizing the Germans’ assault rifle concept, were ahead). But in Hollywood, California, Eugene Stoner, L. James Sullivan, and a talented team that at times included Mel Johnson of Johnson Rifle fame, were applying aerospace technology to the next revolution in small arms.

This entry was first posted on weaponsman.com by Hognose.

Kevin O’Brien was a former Special Forces 11B2S, later 18B, weapons man. (Also served in intelligence and operations jobs in SF). After years magnificent service to his country, Kevin peacefully passed away on April 18th, 2017 from illness. He will be missed in our community and his own. 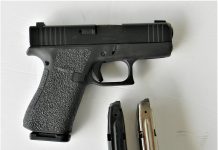