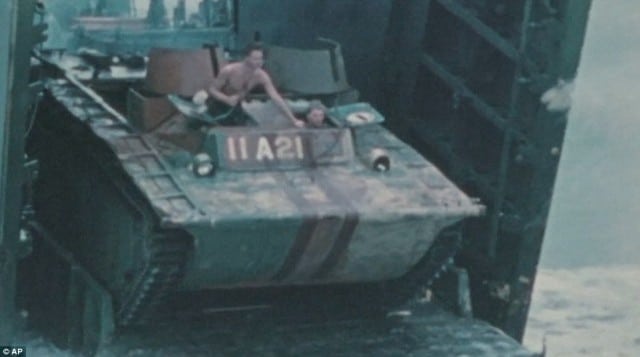 It’s always nice to see when old-school photos emerge. In this photo set you will see US Marines on the beaches of Iwo Jima in 1945 and US Marines 22 years later during the 1968 siege of Khe Sanh in Vietnam War. The collection is part of never-seen-before photos of US Marines as a vast collection of silent, color footage being repaired, preserved and eventually placed online for all to see.

The Marine Corps is sending the rare stockpile of films to photo specialists in South Carolina. Some of the images have been in storage for 70 years and offer viewers a gritty ‘you-were-there’ view of military life. Most of them were not even seen by the combat photographers who shot them with hand-held cameras from the late 1930s through the Second World War, Korean and Vietnam War.

The phots depict storied events such as United States Marines Corps wading through the tide at Guadalcanal, the wounded being evacuated from Iwo Jima and Marines tramping single-file through the hillsides after the Chinese tried to wipe out the 1st Marine Division at the Chosin Reservoir.

The stunning photo gallery for sure will be great addition to US Military history and best showcase for future generations. Take a look: