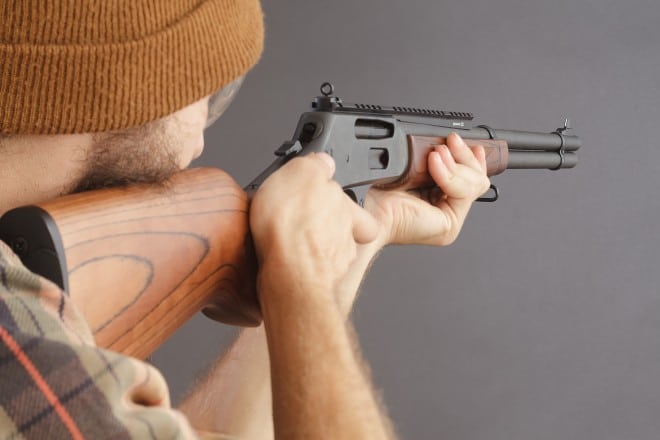 While Marlin 336 has a stronger receiver than most older lever actions, it is still equipped with the same open sights used on the original 30-30 over a century ago. The sight radius is limited and so is the sight picture visibility in low light. Side ejection means that optics can be mounted, so XS Sight company solved both concerns with one part, the Lever Rail. It replaces the rear sight, attaching to the top of the receiver with several screws.

The white stripe edged with black is far more visible than the default front sight. The ghost ring offers faster sight picture acquisition and about 40% more sight radius than the V-notch.

Another option is adding a micro red dot, such as the Lucid M7. That sight just got updated with a simpler 2MOA dot which works better for rifles than the original dot-circle (more suitable for shotguns) and also has far wider range of brightness settings. It’s quite suitable for covering the usable range of 30-30 and similar rounds. Since the rail has quite a bit of length, it would be as easy to install a low power or variable scope instead of a red dot. In addition to the more traditional 30-30 loads, such as the excellent Hornady LEVERevolution, I’ve noticed new options as well, two from Prvi Partisan and two more from Pierce Munitions, the Ted Nugent line. Seems to me the cartridges hasn’t lost much popularity in the nearly 110 years since its introduction.