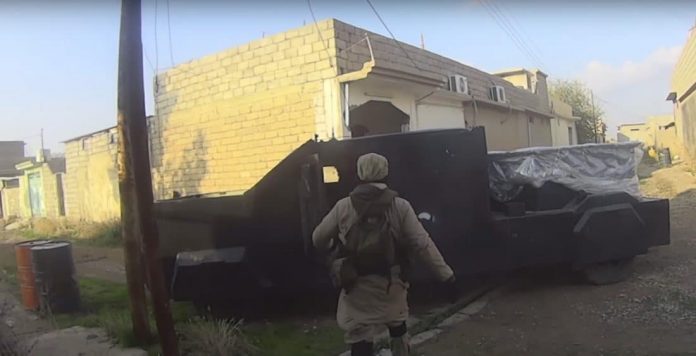 Vice News fell into some video purportedly from the headcam of an Islamic State fighter zapped by Peshmerga last month in Iraq and it gives a window into just how slapsticky these guys are.

Slapsticky in hindsight is actually a complement to the IS would-be warriors as it makes them sound more like the Three Stooges– and we wouldn’t want to put down Larry, Moe and Curly by comparing them to these Daesh acolytes.

The first minute or so is of a going away party for a suicide bomber so poignant that you can almost hear Green Day’s “Good Riddance (Time Of Your Life)” playing softly in the background.

Then there is a ride– in perhaps the worst gun truck ever built– to the frontlines with two guys with likely former Iraqi Army donated K-pots as they go bang–bang with a German M3 machine gun and a beat AK while muttering something about Aloha Snackbars.

“Careful not to shoot at your brothers!” says Camera Guy to Abu as he fumbles around for a fresh 30 rounder while stumbling on a backpack of RPG rounds.

“Abu!” yells one of the elite troopers as his jerkoff buddy showers him with hot brass from his M3, “the bullet casings are hitting us!”

Then the back of the truck turns to burnt carbon and sparks as the dude hating on Abu pops off his RPG right in front of Camera Guy’s face. Google backblast.

But RPG guy flips the script around and yells at Abu for the whole thing, because you gotta have a Carl in the unit, and it if you think that guy is you, pin it on someone else, ricky tick!

Then they break out some improvised AK rocket grenades, because what could go wrong, right? Oh wait, the Camera Guy that this story is based on was dead in the beginning of this tale wasn’t he…

Well, anyway, everything goes soup sandwich and Khattab (the off-screen Uber driver) doesn’t make it. And neither does our found footage guy.

The film closes with a view of the Iraqi sky, cracked earth, and the distant horizon.

Wonder if they ever found that snackbar…