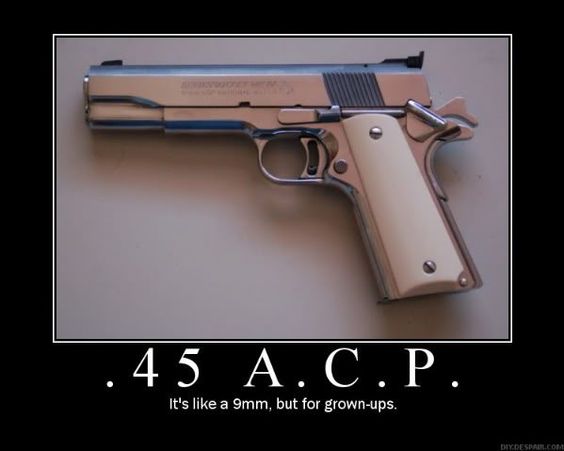 As a concealed pistol instructor, I frequently field questions about what pistol cartridge is the best to conceal carry. The classroom atmosphere forces me to play the diplomat. My typical answer is something along the lines of, “Carry whatever you shoot the best”.

While I have my personal opinions on the topic of cartridge choice, I would like to talk to you all a little more frankly than when I am trying to appease the hardheaded, self-proclaimed, self defense experts… that attend my basic concealed pistol course.

The argument that I would like to discuss first continues to prevail amongst those unwilling to accept change. Every time I hear this statement I cringe, because there is so little thought behind it.

“The .45 (ACP) makes a bigger hole.” While this statement is factual, let’s do a little math. Little being the operable word. The typical projectile diameter of the .45 ACP, the largest cartridge we will be discussing, is .452 inches. The diameter on the 9mm Luger is .355 inches. That equates to a difference of .097 inches or about 2.5mm for those of you across the pond or north of north. Not to be cynical, but basing your self defense cartridge choice on nothing but a projectile being less than a tenth of an inch larger in diameter is asinine.

A well read man by the name of Greg Ellifritz wanted to answer the question of which cartridge is the most effective in self defense once and for all. Over a 10 year period, he kept track of every shooting he could get statistics for; he talked to participants of gunfights, read police reports, attended autopsies, and searched high and low for any reliable accounts of what happened during these encounters. While I highly recommend reading his whole report, I will focus on the information he gathered on 9mm, .40S&W, and .45ACP.

One thing to note is that the majority of the engagements using 9mm were by members of the Military. Military members use very ineffective ball or FMJ ammo. This contrasts the many police departments surveyed that use .40S&W and .45ACP. Also, LEOs will carry hollow point ammunition proven to incapacitate at a much higher frequency. The Military is starting to field JHP ammo.

I think the biggest take away from this study is that the top three self defense cartridges performed similarly; they were all within a few percentage points from each other. I am confident that if the Military’s use of the inferior FMJ ammo was taken into account, there would be even closer performance among cartridges.

So, if in real life applications these three cartridges perform at nearly the same rate, what’s the big deal? To answer that we will dive into research the FBI conducted in 2014 for their new service pistol and cartridge choice.

Before we get into the study itself, let’s talk about the history of law enforcement cartridge choice. Up until the 1986 Miami Dade police shootout, many law enforcement organizations were using smaller caliber pistols chambered in cartridges such as the 9mm and .38 Special. Afterward, the police found that their smaller caliber handguns were ultimately ineffective against the shooters. They blamed the injury and deaths of several officers on their service pistol’s ineffectiveness. After the smoke settled, the agency made the decision to change to the 10mm cartridge, and again later to the .40S&W. Many other police and law enforcement agencies then followed the FBI in switching to a larger caliber service pistol.

The FBI began eyeing another change in caliber sometime around 2007, this time back to the 9mm Luger. Why the change back? The agency found that officers were able to put accurate shots on target faster with 9mm than it’s larger cousins. In a profession where a high percentage of rounds fired miss their intended target, having a pistol that aids in officer accuracy can be the difference between stopping a high casualty event or making a bus full of nuns collateral damage. How is the 9mm increasing hit percentages? The round simply has less felt recoil. They also concluded that a swap to 9mm would lower training costs and increase reliability in service weapons. They could achieve this all without sacrificing terminal effect on target.

Despite what “knockdown power” arguments you have heard on television or a forum, there are only two ways to permanently stop an attacker. The first is through disrupting the central nervous system, causing substantial damage to the brain or spine. The second, and more likely route, is through depriving the brain of oxygen through severe blood loss. During the FBI’s study, they concluded that all three cartridges were able to disrupt enough tissue to cause the blood loss needed to incapacitate an attacker. Essentially, carrying any one of these cartridges would allow a shooter to be successful as long as they have good shot placement.

One can make many arguments for the 9mm as a superior pistol cartridge choice based on the data I presented. The FBI chose it, the cartridge has less recoil, and frankly I enjoy shooting it. As much as I would like to claim victory in choosing the superior cartridge on my self defense journey, I would instead like to leave you with one final parting thought:

Carry whatever you shoot the best. The hits are what stop threats.