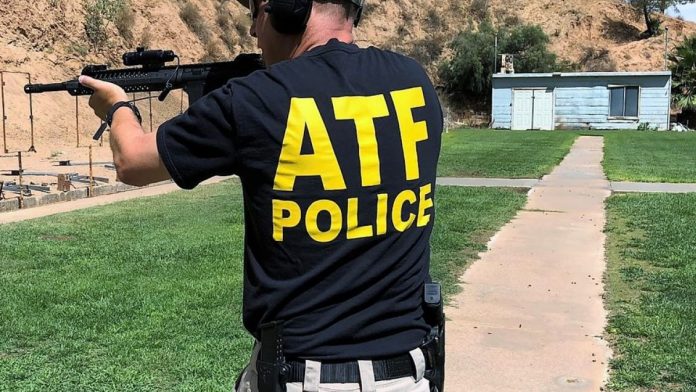 An ATF agent with the Los Angeles Field Office qualifies at the range. Both federal and local authorities in Oakland are on the lookout for guns recently stolen from an ATF vehicle there (Photo: ATF)

Equipment to include a select-fire Colt M-4 rifle was snatched in a burglary of an agent’s vehicle parked near a Bay Area federal building. Stolen in the smash-and-grab Tuesday evening from a Bureau of Alcohol, Tobacco, Firearms, and Explosives vehicle besides the M4 were a 9mm Glock, handcuffs, an ATF radio, and a Taser, reports the East Bay Express.

“ATF is aware of the theft and is aggressively pursuing all leads and working closely with our local partners to quickly find the individuals responsible and return the property,” Ginger Colbrun, a spokeswoman for ATF told the Express

This week’s heist sheds renewed light on a spate of high-profile gun losses by federal authorities in the area, some of which have ended in tragedy. Lawsuits have been filed by the parents of Kathryn Steinle, killed as she was walking along San Francisco’s iconic Pier 14 with a gun stolen from the car of a Bureau of Land Management ranger; and muralist Antonio Ramos, killed with a Glock left in an unattended vehicle by an Immigration and Customs Enforcement agent.

The ATF has had its own problems with guns stolen from cars. A troubled undercover storefront operation in Milwaukee in 2012 saw three ATF-issued firearms swiped from a government-owned SUV, including an M-4 .223 caliber rifle, parked in front of the shop. A subsequent burglary of the shop incurred losses of $39,000 in property including an ATF tactical ballistic shield, which was later found in an alley and recovered.

Other federal agencies have had their share of missing guns as well. A 27-page report by the Department of Homeland Defense watchdog discloses that between 2014 and 2016, personnel of the nation’s largest law enforcement agency lost sensitive assets including 228 firearms, 1,889 badges, and 25 secure immigration stamps.

That report comes as a follow-up to a 2010 review that cataloged 289 firearms as lost between 2006 and 2008 and resulted in several policy changes in how the various agencies handle their controlled items. The review found that of the 179 guns lost due to the failure of the agent or officer to properly secure the weapon, “all 179 losses may have been prevented had the officers properly safeguarded their firearms.”