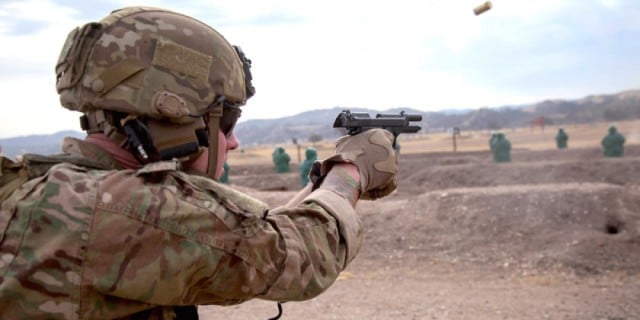 In early December, Beretta USA, the manufacturer of the U.S. military’s official sidearm submitted a modernized version of M9, designated as M9A3 as a possible alternative to the Army’s Modular Handgun System program – an effort to replace the M9, who spent in service 30 years, with a more powerful, state-of-the-art pistol.

The improved version of M9 features new sights, a rail for mounting lights and accessories, better ergonomics and improved reliability, Beretta USA officials said, but it looks like it was not good enough for the U.S. Army officials. The final decision comes out late in December when Army’ s Configuration Control Board decided not to evaluate the M9A3. The Beretta’s engineering change proposal for the M9 was already made but the control board decided different, according to a source familiar with the decision.

The next move expected by the Army is to release a pending request for proposal that will launch the MHS competition. That cleared the way for the introduction of new service sidearm. Program Executive Office Soldier would not comment on this story until Army Public Affairs has approved a statement, PEO Soldier spokesman Doug Graham said Thursday night.

The contract could include buying of nearly 500,000 new pistols during a period of significant defense-spending reductions. The U.S. Army worked with the small industry on MHS since 2013, but the joint effort has been in the works for more than five years.

The possible contract, according to the current plans, will include more than 280,000 handguns from a single vendor, with the delivery of the first new handgun systems scheduled for 2017, according to PEO Soldier officials. The Army also plans to buy approximately 7,000 sub-compact versions of the handgun. This should increase soldier’s battle readiness and improve their overall gear and equipment.