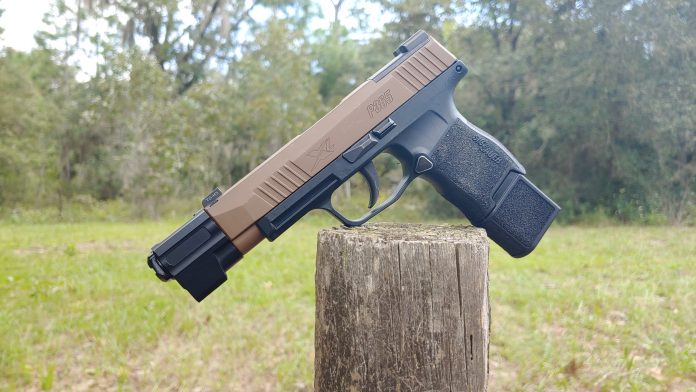 Comps on carry pistols are an interesting debate. While I might not be John Wick, I am curious. I’ve never used a comp on a handgun outside of a SHOT Show range day 1911. My experience is best described as rudimentary. Well, it was until Tyrant Designs sent me their P365 T-Comp.

Tyrant Designs is a manufacturing company who made their name with a CNC machine and some chunks of aluminum. They created a series of AR 15 pistol grips, some awesome foregrips, and numerous compensator designs. Outside of their Glock specific comps and their universal comp, they made time to create a P365 comp. With the popularity of the P365 and the fact it’s one of the top-selling pistols of the last few years, and it’d be foolish to ignore it. 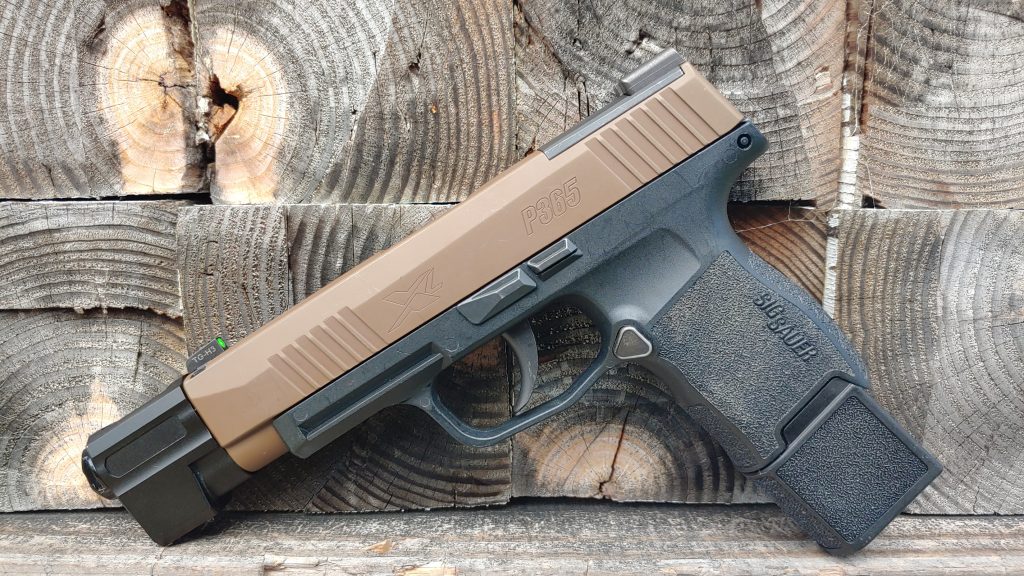 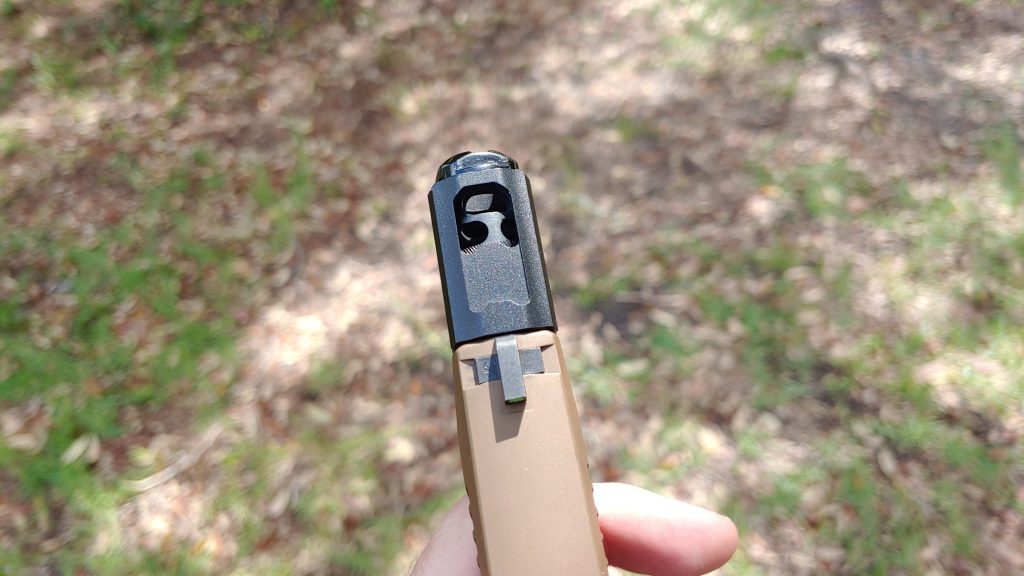 The T-Comps designs eliminate the need for timing and shims. The port design ensures that regardless of where the comp stops threading ports will be facing upwards. The sleeve that encompasses the compensator matches the lines of the P365 slide and looks like a natural fit to the gun.

Predictably, installation is quick and easy, and Tyrant Designs includes a 16mm wrench to lock the comp down nice and tight. Ensuring the sleeve is aligned perfectly with the slide provides some contention, but not much. Once installed and locked on tight, you’ll see the main downside of the T-Comp.

It’s huge. 1.5 inches long, and that’s a lot of extra length for a compact weapon. When tossed onto the P365 XL slide with a 15 round magazine, it starts looking like something out of the game Borderlands. The good news is the weight is low, and the comp doesn’t make the P365 an unbalanced weapon.

I was quite curious to hit the range and see how this big fella performed. I loaded up a variety of ammo, including lightweight 115-grain loads all the way up to 147 grain JHPs. Along the way, I had some 124-grain FMJ loads and even some +P SIG JHPs.

The goal of a compensator is to reduce muzzle rise from a pistol. Small pistols have more muzzle rise and earn the snappy moniker. Compensators tame the beast, and the after-effects are faster follow up shots and controllable rapid fire.

The T-Comp performed admirably and chomped down on muzzle rise significantly. The biggest reduction seemingly came from the 147 and 124-grain +P loads. That’s predictable since 115 and standard 124 grain doesn’t necessarily have a whole ton of recoil in the first place, and the reduction in muzzle rise is less noticeable. 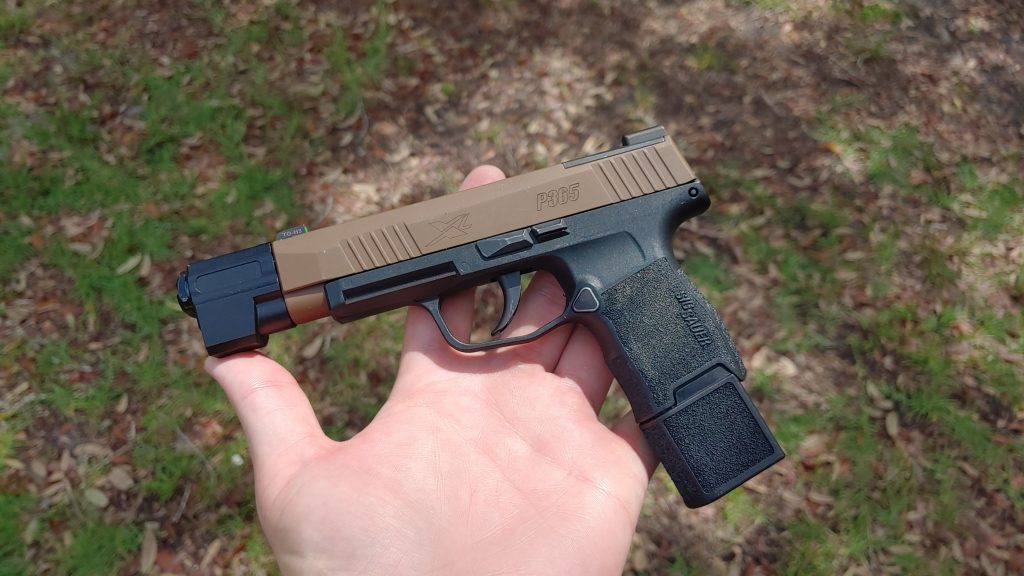 Instead of the gun-jumping with every shot, it more or less hopped a bit with every shot. The reduction was significant, and I had to reprogram myself to acknowledge that my time back on target was shorter. I would pause for a fraction of a second because I was so used to dealing with snappier muzzle rise.

Without a doubt, the compensator worked as advertised. It reduced muzzle rise to a significant degree, got me on target significantly faster, and made my P365 control like a much larger gun. In fact, I would say recoil is the same as my full-sized steel frame CZ 75B.

Does the T-Comp Reduce Reliability?

Compensators can have the effect of reducing reliability with light loaded rounds. Sometimes they can cause your gun to choke with lightly loaded 115-grain FMJs. A loss of reliability is a necessary evil with some compensators. 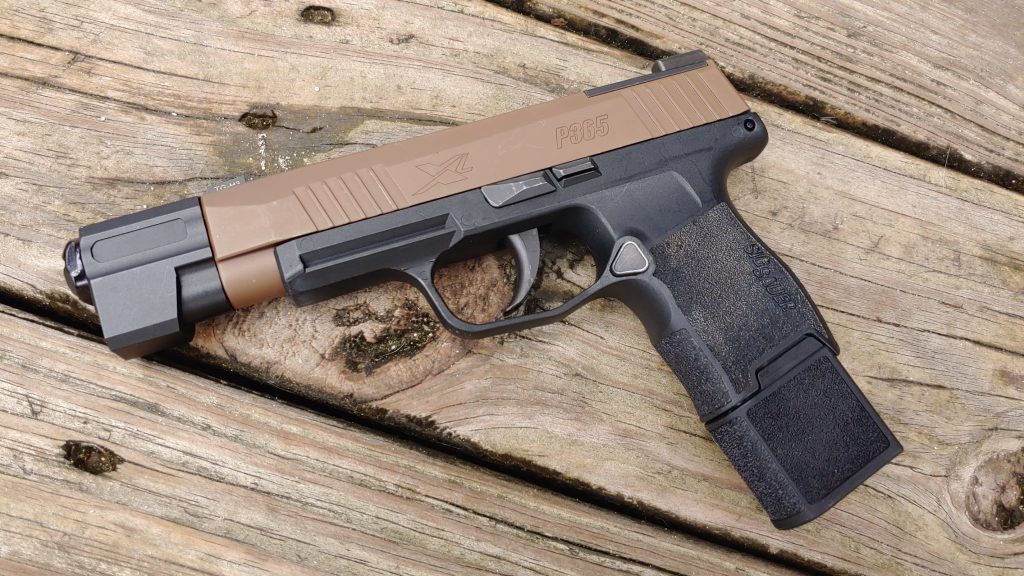 As someone who shoots lots of 115 grain 9mm, a loss of reliability would be a bit of a concern. However, the P365 T-Comp doesn’t seem to compromise the reliability of the P365 with 115-grain ammo. The T-Comp shoots it perfectly fine. It doesn’t seem to make the gun choke or fail. Maybe it would have some issues with some 90 grain reduced recoil ammo, but that’s not my concern.

Another downside to compensators is that the gas the compensator is diverting upwards can be a hassle. This is especially true when shooting from close retention positions. The good news is the T-Comp only has top ports and no side ports. The lack of side ports makes it easy to ignore the gas if you simply twist the gun slightly sideways. Compensators on carry guns are not a necessity, but they are far from useless. The P365 T-Comp is admittedly a big addition to a small gun, but the size is on the end that’s easier to conceal. The T-Comp is easy to install, effective, and quite affordable. It’s not for everyone, but if a comped carry gun is for you, the T-Comp, or Uni Comp, is a great choice.