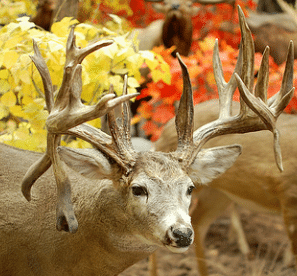 Scoring deer antlers can be a bit confusing, especially since most hunters score only a single set of antlers each year, if any. If one is not well-versed in antler scoring terminology, then it requires the hunter to get reacquainted with the terms (and what it’s referring to) each year. I’ll admit, it’s not an easy process/concept to wrap your mind around because the words “typical” and “normal” (and “non-typical” and “abnormal”) mean very different things when scoring a buck, but people commonly use them interchangeably in daily conversation when talking about other subjects.

I’ll address the following questions. “What determines whether a buck is scored typical or non-typical? Is there a maximum amount of deductions allowed for typicals?”

There is no set rule that says a white-tailed buck must be scored typical or non-typical. The choice really is up to the hunter and which classification makes the most sense. As I go through the following discussion, it will become obvious how a particular buck should be scored.

First, when scoring deer antlers, all normal and abnormal points are measured. The scores of both typical and non-typical sets of antlers are based off the symmetry (after deductions) of the main frame. Yes, even non-typical bucks get deductions for not having a symmetrical main 8-point, 10-point, 12-point, etc. frame with matched points of the same length.

Odd, freakish, and unmatched points do not add any value to the typical antler score as per the definition of a normal point. When scoring a typical set of deer antlers, the length of abnormal points is measured, but subtracted from the gross score of a buck. The rules state you cannot add abnormal points to the score of a typical frame. If the antlers are nearly typical, abnormal points hurt the net score. So there is no maximum on the amount of inches that can be deducted because the mathematics of the issue becomes self-limiting. The more abnormal points, the lower the net score becomes under the typical classification and the more the judge/scorer leans towards scoring the antlers non-typical.

Again, the important thing to keep in mind: Both typical and non-typical sets of antlers are scored based on the main frame. The only difference is that abnormal points deduct from a typical rack’s final score, but they are additive for non-typical. If the white-tailed buck has a lot of abnormal points, why score it as typical and then subtract away abnormal points?

If, on the flip side, you only had 7-inches of non-typical antler on your buck (a single drop tine, a split tine, or an extra point), typical makes much more sense. The more abnormal points a buck has, the better the likelihood it should be scored non-typical. Of course, I’ve seen some white-tailed bucks that get stuck in the middle — not enough abnormal points to score high as a non-typical, but too much to score well as a typical.