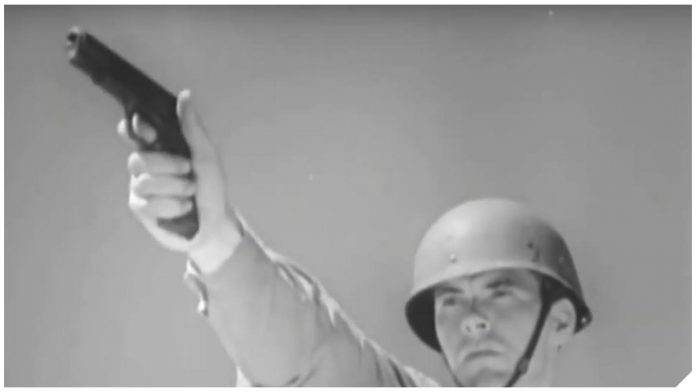 John Moses Browning’s M1911 was the standard handgun of the U.S. military for over 70 years, and here is how the GIs headed to Europe and the Pacific were trained to use it.

The above video, posted by premium 1911 maker Cabot Guns, surfaced this week on the occasion of VE-Day, the 74th anniversary of the end of World War II in Europe.

From 1912 to 1945 more than 2 million M1911s were produced for the military by companies ranging from firearm industry regulars like Remington-UMC, Colt and Ithaca to non-traditional manufacturers like typewriter maker Remington Rand, Union Switch & Signal, and the Singer sewing machine company. They did a good job, as the guns remained in service well into the 1980s when replaced by the Beretta M9/92F. Heck, the Army still has 92,000-ish 1911s in storage in Anniston, Alabama.

While the vintage training film is entertaining, keep in mind that the basic rules of firearms safety, storage, and use have upgraded a bit since the age of The Greatest Generation, so don’t go recreating it without those more modern guidelines in mind.