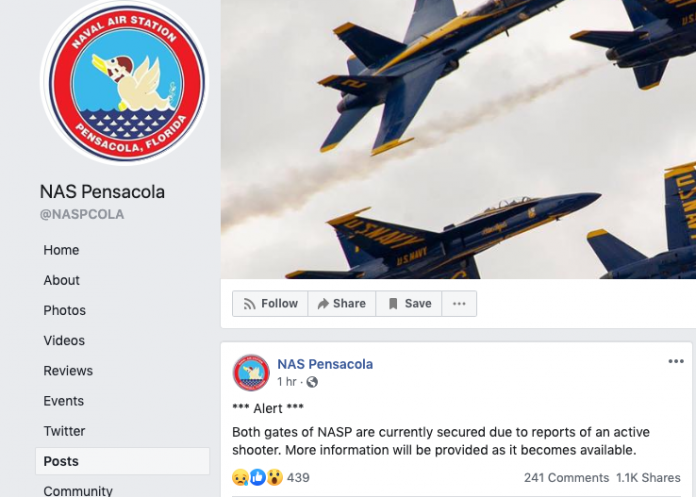 UPDATE: Pensacola Suspect is a Saudi National, who killed 3 at the Florida NAS Station, making this into a more likely terrorist attack rather than a workplace murder/suicide. The Saudi was a member of the military training at the NAS station. Similar attacks have happened, usually on overseas stations training the local militaries with US instructors.

Naval Air Station Pensacola is currently on lockdown. The Florida Naval Base has been the scene of a shooting just two days after a sailor in Pearl Harbor killed two before taking his own life.

Current reports have two dead, several wounded, and the shooter dead at the Florida scene. Motive is unknown at this time…

Pearl Harbor seems to be a lash out, a workplace suicide with a side of revenge and ‘making someone pay’ for the stress or trauma that had that sailor reaching that final decision.

NAS Pensacola? Unknown, but with the publicity and how quickly scuttlebutt would travel around the Navy this could very well be a copycat to similar motive and effect. The risk for copycat attacks is always highest in the immediate aftermath of an event, where an individual who had been contemplating violence sees the similar attack as a form of extensional permission and motivation for their own.

The Navy itself has been wracked by systemic problems with stress and suicide. A single ship, a carrier, the H.W. Bush, had four suicides in rapid succession among its crew. The Pearl Harbor murders/suicide is a probable extension of that same stress.

NAS Pensacola is still largely an unknown. We don’t yet know if the shooter was a civilian or sailor. We don’t know if there is a separate motive and logic base for this attack. The only confirmed items at this time are two dead, the shooter dead, and several wounded being treated.