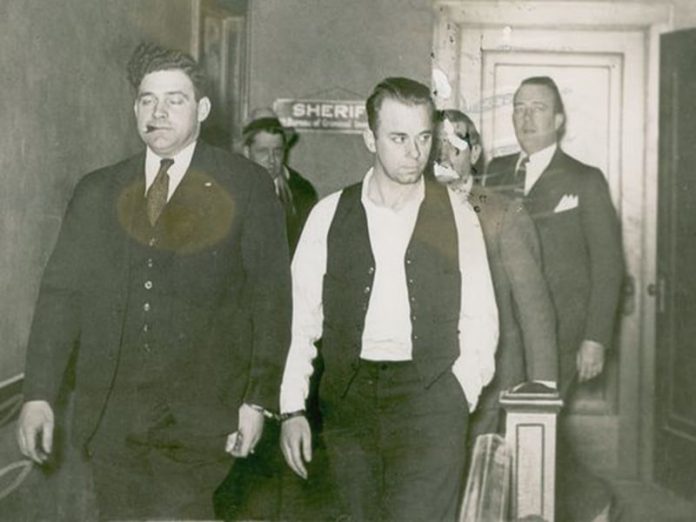 The Tuscon Police Department since 1934 has been holding on to a Thompson submachine gun they took off John Dillinger, which Peru, Indiana says was stolen from them.

The notorious Public Enemy No. 1 was hiding out in the Southwest town when a hotel fire on Jan. 22, 1934 led to the gang getting pinched and a trunk-load of their weapons, (all stolen because background checks right?) were captured alongside them.

One of the proud specimens held up by the Tuscon Police to this day is a Colt made Thompson. The only thing is, another police department back in Dillinger’s original neck of the woods say it was swiped from them beforehand.

As noted by the Indy Star, Gordon Herigstad’s “Colt Thompson Submachine Gun Serial Numbers & Histories” lists the gun in Tuscon, serial #5878 as being purchased and shipped to the Peru Police Department in 1929.

“Gun number 5878 was never returned to Peru after the Tucson police arrested Dillinger’s gang in early 1934,” Peru Mayor Administrative Assistant Josh Sigler told Tuscon News Now in the above video. “You know the fact of the matter is that we didn’t give the gun to Tucson. It was taken from us by a criminal.”

But TPD isn’t so sure. They argue since they have had it for 82 years, predating the National Firearms Act, its a case of finders keepers.

“Possession is 9/10 of the law,” said historian and Tucsonan Jim Turner.

“We were the first people to capture him,” Turner said. “Not one shot was fired. They waited until men came out and got them one at a time. Dillinger is even quoted as saying, ‘You did it right. You took us one at a time.’”