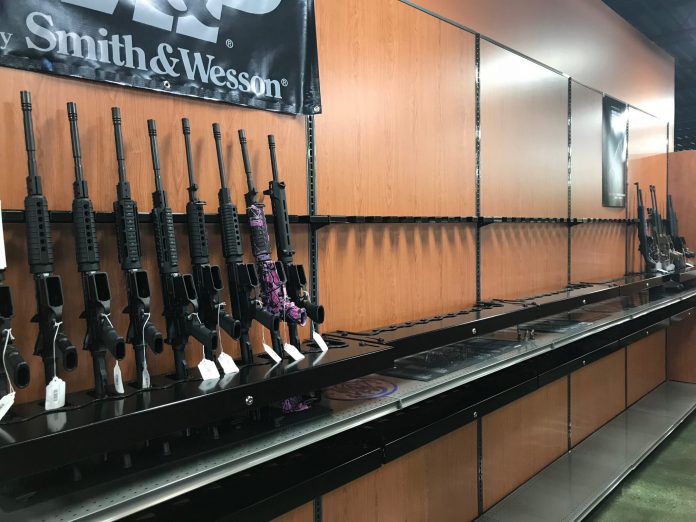 The title image was sent to me from Southwick’s of Plainwell, MI. My friends down there usually have a healthy stock of AR-15’s and similar rifles and they have been slow business in the year since Trump was elected.

They still have a few left but the supply and demand have certainly inverted.

Other stores are cleaned out completely.

President Trump’s vocal support for various gun control measures has reignited the panic buy market. It’s given a welcome influx of cash assets to the stores heretofore struggling due to the market’s sudden shift. When Trump was elected the plateauing market suddenly went full stop. Gun purchases became entirely about want and hunting the best deal became the name of the game. You could wait and get the gun you wanted now because no one was coming for your guns.

Trump changed that by voicing publicly that due process was on the chopping block along with the guns themselves.

The loud, emotionally passionate, and fairly articulate voices of the teenagers victimized in Parkland were immediately put center stage by the anti-gun organizations and handed talking points that sounded great. They could garner the sympathy of being children and be given a false credence of expertise and authority for sounding like adults and being child victims.

The unique combination of national sympathy for children and the clear voiced nature of the victims gave a momentum to the agenda that Garland, Texas and Las Vegas, Nevada did not.

The President responded on the “we must do something” line of dialogue. That dialogue is the same proposing gun bans and 2nd Amendment repeal. The man who promised the assault on our 2nd Amendment rights was over gave the greatest fuel to the renewed attack and subsequent fear of the loss of constitutional rights.

What to do today?

Keep an eye on the bills making there way through congress and let your voice be heard.

Continue too, to vote with your wallet and support those businesses that support your rights.

Check you local gun store. (If it’s Dick’s or Field and Stream don’t bother, go to the next one) or hit up the guys online. Operation Parts still has a few and Southwick’s did too if you’re in the area.

But more importantly go to the digital halls of congress and let them know where certain bills need to end up.