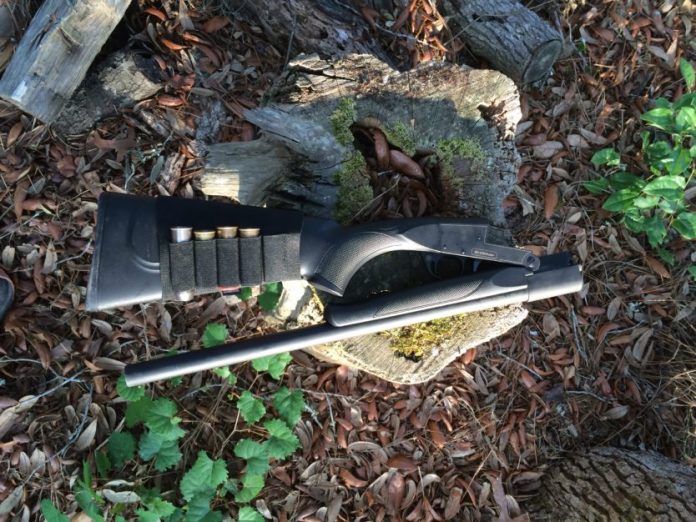 The need for a lightweight, easily portable, but powerful weapon is one outdoors folk regularly have. Be it camping, hunting, or just a bit of adventuring anytime you step outside of civilization you should want a weapon that can bring you back. This Tristar folding shotgun fits the bill for me, and I was pleasantly surprised at how well made and how handy the weapon was. I purchased the weapon second hand after seeing it on a local ad. I could only find scant information on the shotgun, but the seller told me it was a prize to be won at the National Wild Turkey Federation Banquet and that is where he acquired it.

The shotgun is a single shot, folding weapon that is light, handy, and chambered in the powerful 12 gauge. The shotgun can chamber 3-inch shells, and has a fixed choke. This shotgun is extremely lightweight, I don’t have an exact scale, but on a basic bathroom scale, the shotgun weighed right under 4 and a half pounds. The shotgun has very few markings, and it’s branded Tri Star. The weapon says made by Artemis and a google search for Artemis shotguns gives me Khan shotguns, a Turkish firearm manufacturer. A bit of browsing at Khan’s single shots and I found some very similar models. These shotguns are known as the K100 and are made with sportsmen in mind. The shotguns feature ribbed barrels and wooden furniture, but they remain the same basic design, with the folding mechanism. The weight listed for these shotguns are right around 5 pounds, so under 4 and a half is pretty accurate for this bare bones model. 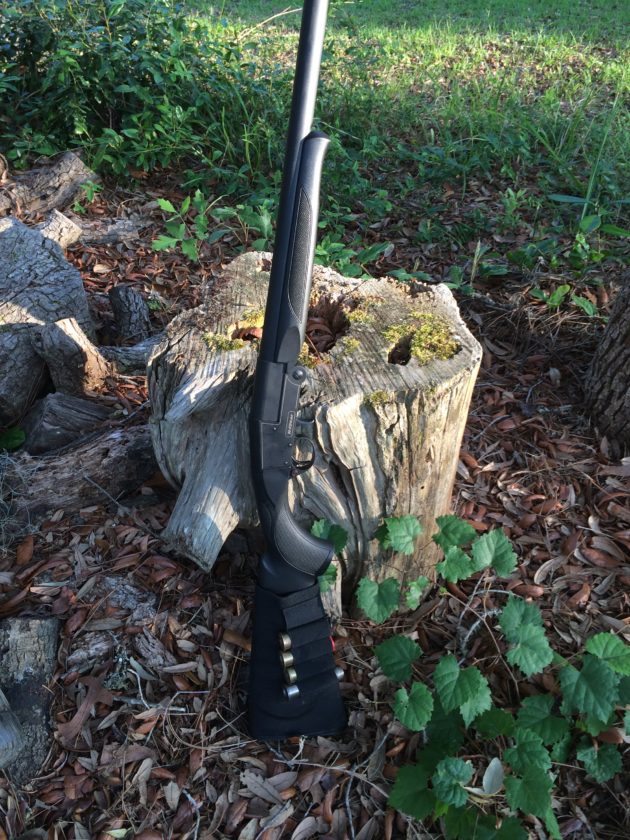 The shotgun is light but built like a tank. The barrel is quite thick, and the receiver is way thicker than necessary. The overall design is very simple, with an internal hammer and a 20-inch barrel. The safety is a simple push button near the trigger guard. The finish is actually parkerized, which is impressive, and a desirable feature on a beat around shotgun. The sights consist of a small gold bead and a small little indent at the top of the receiver. The furniture is a very simple polymer material. The stock is actually hollow and can be used as a compartment for survival supplies, or it can hold 10 2 ¾ 12 gauge rounds. This also makes the shotgun capable of floating.

The shotgun, when folded, fits in my small Alice pack, a common companion on my outdoor excursions.

You pay for that lightweight when you start shooting the weapon. You get the full force of a twelve gauge round into your shoulder, and it is far from pleasant. Even with heavy steel loads you are going to feel some pain. Buckshot is pretty rough, and I fired slugs in two round strings, but that was enough to judge the slugs were quite accurate. A slip on recoil pad would be a welcome addition to the weapon. The basic gold bead works fine and the shotgun patterns well. The trigger is somewhat stiff but very short.

I’d talk about reliability, but it’s a single barrel shotgun, it’d be more impressive if it wasn’t reliable. The weapon has an extractor that pushes the shell out positively and makes it easy to grip and rip from the chamber. It reliably shot and extracted birdshot by Federal, 00 Buckshot by Federal, Remington, and Fiocchi, No 1 Buckshot by Remington,  and slugs by Remington and Winchester.