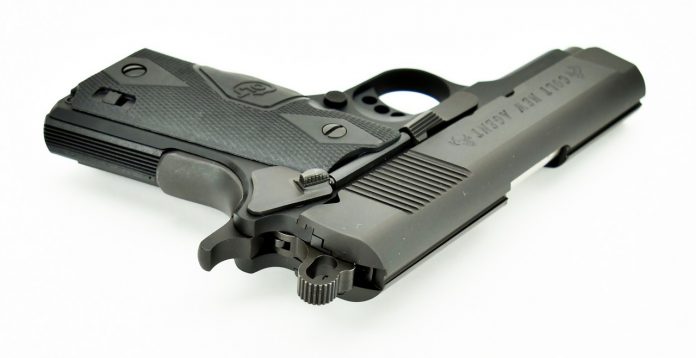 Sighting systems on handguns don’t have much variation. We have the red dot option and the standard notch and post style. Other than that, anything else is often somewhat odd. One of the odder styles of handgun iron sights is trench sights. Trench sights is a bit of a misnomer. There isn’t really a set of sights. Trench sights are a notch carved from the front to the rear of the slide. As the name implies, it’s a trench.

It’s tough to find information on the history of trench sights. They seemed to gain some popularity after the 1960s. One of the first notable weapons to use some form of trench sight was the ASP pistol. In all fairness, it wasn’t a real trench sight, but a proto version of it, if you will.

In the 1970s, AMT put out the Backup, a micro-sized pistol in numerous calibers. As the name implies, it was designed for deep carry and as a backup gun. They featured a trench sight across the top. A small company called Sterling produced the Model 302, a .22LR pocket-sized automatic with a trench sight.

Most recently, the Colt New Agent had a trench sight, which seems to be the last modern handgun to feature trench sights. They have certainly waned in popularity over time, and as point shooting disappeared from the training consciousness, trench sights went with it.

What’s the purpose of hacking sights off your gun and carving a notch in it? Well, the main benefit is tied to deep concealment. The purpose of trench sights is to eliminate snags when drawing from concealment. Sights were seen as a snag waiting to happen. Without sight, how do you aim the gun?

You carve a trench into it and then look through the trench to attempt to index the weapon in the correct orientation. They are just a step above using the end of the slide to aid. Trench sights make it easy to ensure your gun is at least pointed at the bad guy with the tip of the barrel in his general direction. It lacks the ability to give you a proper and precise sight picture.

Trench sights do promote more of a target focus than standard iron sights. Focus on the target and put the trench between you and him. That can be a faster and better way to fight, but it does limit you to extremely close range.

If you set a silhouette target at seven yards and gave me a SIG P365, I could put ten rounds into what’s essentially one area of the chest, likely grouped very close together. Put me at the same range with the same target and a pair of trench sights, and I could hit him in the chest. It likely won’t be in a tight group, but the shots would be in the chest.

They do work, at very close range, on a big target. On smaller targets and at longer ranges? Well, maybe. If the target sits still, sure, but how likely is someone to sit still in a defensive encounter? With my Sterling 302, I can hit a 10-inch gong at 15 yards most of the time.

SIG and the P365SAS use something similar to a trench sight, kind of, and it might be the most usable of the trench sights out there. Honestly, with modern guns and modern holsters, the chance of a snag seems rather lower. In some real niche deep concealment situations, I guess it could happen, but it seems like the age of the trench sight is over.