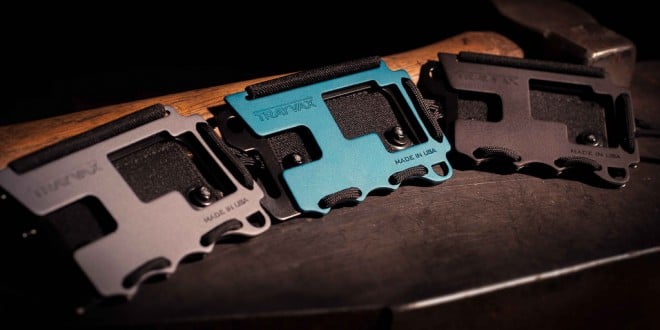 This week we took a break from our usual concealed carry; self-protection style reviews to cover EDC accessories. In continuation of this theme, we are going to discuss a product that is going to be used every single day of your life.

Trayvax is a company that was brought to my attention by John @ Lather House Soapery located here in Royal Oak Michigan. John is a follower of 248Shooter, a friend and someone who is far more in touch with the EDC movement then me.

He has been through easily 20 wallets since I have known him. In fact, nothing occupies more of our beer drinking time than talking about guns, wallets, flashlights, and knives. While not as versed as John, I have gone through my fair share of wallets. Over the last 2 years especially my wallets have transitioned from leather and nylon to aluminum.

What makes a Trayvax Wallet

Trayvax is an American designed, funded and built wallet. Currently, the company offers 2 different styles. The original or classic style is retailing for 24.99 in standard colors and 39.99 for cerekoted tactical colors. As well as the Element version that is more refined. The element differs from the classic by replacing the elastic strap with a leather one, removing the bag carrying feature, adding a money clip , and moving the bottle opener internally.

While I certainly like the look of the element it is far classier than I am. It is also a bit more expensive at $69.99. Certainly not expensive when compared to my gun collection but I’m a person that enjoys function over style.

We focused our review on the original all black model. It is a piece of anodized aircraft grade 6061 aluminum connected with heat resistant elastic and mil-spec 550 paracord to E-coated cold rolled steel.

I was unable to test the RFID-blocking technology. Reading other reviews their seams to be a mix of opinions with nobody actually testing it. Bad news I’m not any better. I refused to get RFID-based credit cards and I don’t have an RFID scanner. All I can do is reference the Trayvax website.

Our Trayvax Classic wallet is RFID-blocking, keeping your information safe from identity thieves who take advantage of these RFID credit/debit and identification cards. Regardless of the orientation of your cards, the Trayvax Classic will protect your cards from RFID scanners. This is due to the fact that RFID cards have a ring around the edge that act as the antenna for the RFID chip, and the Trayvax was actually designed to block these antennas rather than the chips themselves. So even if the RFID chip itself is in the ID cut¬out on the wallet, its antenna is being blocked around the edges and your cards are protected from unwanted RFID scans. Low-¬range RFID cards like credit cards and state IDs are protected, but high-¬range cards like work IDs will still work through the wallet.

I like that according to its description the cut out don’t affect the system. Also, it appears that some of the people that “tested” the wallet did it with work scanners that work differently than the short-range credit card chips. Trayvax claims to allow these longer rage work ID system on purpose so no surprise they work.

As for the card capacity that we did get to test. My Trayvax holds 2 licenses (driver and CPL), 6 normal thickness credit and loyalty cards, 7 thin paper and laminated membership cards as well as cash and usually a RI-060 (this week its for my new G42). The wallet holds all of this without issue. I have seen no problems with the Velcro pulling or opening. The cards and cash have stayed in place, unlike the last wallet I had that would often dump all mu cards in my pocket or on the counter.

The bottle opener has come in handy more often than I ever expected. I blame this on my switching to Not Your Fathers Root Beer as a drink of choice. A quick look at the wallet I have been testing since the end of May will show you exactly how handy it has become.

The bag carrier is a cool idea for those of us that live in extremely urban environments. Major cities often involve smaller but more frequent shopping trips. While I no longer live up 4 flights of stairs in NY like I used to having tested this feature out could see how this would come in handy.

Keychain and carabineer attachment loop looked like a great idea. I threw a carabineer on the loop for use when wearing running shorts. Since the loop is on the aircraft grade aluminum, the leverage of a carabineer caused the plate to bend while in my pocket. After I noticed the bend I stopped using the loop. I am ok with the bent ring as it gives my wallet character, but would like to see the loop moved to the steel section in the future.

The 550 paracord tab is designed to help adjust the wallet as well as stopping the cards from falling out the back. It works FANTASTIC for an easy tab to pull the wallet from a back pocket or cargo pocket. Though beware in a back pocket it likely would make a pickpockets job wicked easy.

I’m keeping this wallet. In hindsight, I would purchase the cerekoted versions as the black finish has already started wearing. Lucky for me I know a few guys who can help me out. I might even send it off to WMD or Blown deadline and have it done in some unique style.

It’s designed to hold cards and cash. It does that better, thinner and easier than traditional wallets. It is easily secured to a bug out bag, range bag or other device when out on the range incase you want to roll around, get prone or just don’t want to carry all those damn cards.

It’s not made of magic like I hopped. None of my wallets usually last more than a year due to the beating they get. This one will certainly make it past the year, though as you can see it is showing signs of abuse. However a simple recoating will likely bring it right back to almost new.

For $29.99 your not going to get a much better utilitarian wallet that is US made. You can learn more about these wallets at the Trayvax website http://www.trayvax.com/.