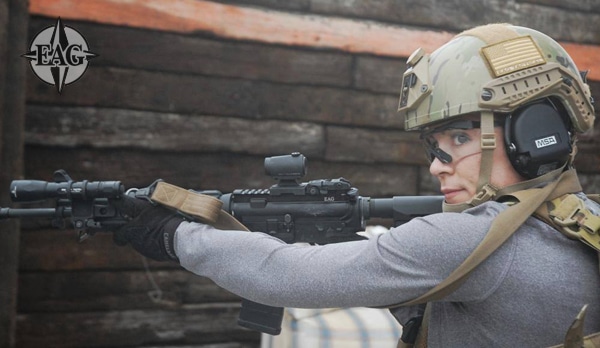 Today we’re bringing you an AAR of a training evolution. The instructors were Pat Rogers, Steve Fisher, John Chapman and John Spears – quite a crew as you can imagine. Here’s Breach Bang Clear contributor Tatiana Whitlock on how the course went down and how she liked the gear she used over the course of 11 awesome days. Mad Duo

Pat Rogers and EAG Tactical were gracious enough to allow me to outfit three back-to-back classes held in Alliance Ohio with my ID Target design for a pre-release test run. [Note: these targets are now available and growing in popularity, see below.] I arrived expecting to take copious notes on the targets performance and observe the class as students engaged them. A shoot house attended by some remarkable and squared away students is arguably the harshest test environment I could dream of to push the limits of this design. What I did not expect was to be told on TD1 that I was to gear up and join the class. Needless to say I was thrilled at the opportunity to participate and jumped in.

The first of three back-to-back classes was the EAG Tactical Shoot House course. The four day class was tuned to law enforcement and military with it’s vernacular, the presentation of the curriculum, and the structure of the two-man scenarios. From a civilian’s perspective everything from the lingo to the problem solving approach was brand new.

Pat Rogers, John “Doc” Spears, Steve Fisher and John “Chappy” Chapman were an amazing combination of instructors. The curriculum was presented as a unified whole while each offered a unique spin to problem solving and correcting mistakes. To have the opportunity to train with any one of these instructors is an honor and to have them all under one roof as a wealth of knowledge was something no one took for granted.

The medical/CLS portion of the course was particularly fascinating. Doc presented a vast amount of information in a succinct and direct manner. Understanding what types of injuries occur under combat situations, how to identify them and treat them appropriately put into context the importance of such knowledge when time is of the essence. Again, the real world application of these life saving skills applies to every day civilians as much as it does to service men and women. Should a legally armed citizen prepared to defend themselves against deadly force be equally prepared provide aid to injuries caused by deadly force? Absolutely!

Learning to reduce what at first sight looks like an overwhelming room filled with clutter and debris into simple shapes so as to best process the information may sound like a simple task – until you are physically attempting to do so. Like all great design: it is just that simple and it is just that hard. This class was far from a tactical fantasy camp. Everything you practice on incubator of the square range was put into context in the 360 degree shoot house. It takes no great stretch of the imagination to apply these principles to the structures I live in every day: home, office building, grocery store, parking lot, etc.

All learning aside the gear was flat out fantastic! Per my usual experienced, I turn my back and someone kidnapped my rifle and returned it slightly altered. This time my rifle came back with the BCM EAG HS mid length upper and a Surefire PX3 Fury light. Better than Christmas morning? Yes! Three days of EAG CQB Operations was the next class to follow. This program began in the Shoot House, moved on to a night op in a city owned abandoned crack house, and ended in an old crane manufacturing warehouse the likes of which would make Mad Max proud.

Needless to say the instructors upped the intensity and stressed even more attention to detail. Here I received my first intro to force on force and working in groups of 4, 6 and 13 man teams. Few things are as motivating as being fired upon by a 6’5” 300lb man that moves terrifyingly fast, UTM rounds or no! You’ll find you’ll clean up your communication and teamwork skills expeditiously.

Running the PX3 in the three different environments proved the value of 1000 lumens. Inside the both the shoot house and the urban house I could flood a room with light, see more and thus process faster. My partners did not go blind and no paint was melted off walls. However, the truly interesting lesson learned about this light was from having had the opportunity to be an OPFOR role-player in the warehouse. Another classmate that ran the PX3 came through with his team while I hid and waited for them behind an ancient stamping machine. Though I could see the glow of the PX3 first, the sheer size of the corona made it difficult focus in on. Rather than spend my rounds fishing around inside the PX3 glow for something to hit I switched to aiming in on the 500 lumen, and significantly smaller, glowing orbs pointed right at me. Getting good hits on those guys was exponentially easier than their 1000 lumen teammate. See more, faster, and be harder to hit? I’ll take two please. EAG Shoot House Refresher course: The final four days consisted of a high-test concentrated progression from the prior seven. With a lineup of classmates, nearly all of whom do this for their day job, the level instruction was necessarily catered to these working professionals. There was no room for error in fundamental skill sets or techniques as this group was there to refine what they already do best. We began in two man teams at the shoot house working out the kinks in everyone’s armor and getting us all on the same page. We then jumped right into six man teams and thence into force on force in both the shoot house as well as the urban house and ending the program with a full 13 man force-on-force in the warehouse. This class moved fast. We worked all three locations, breached doors, threw bangs, executed ladder assaults, and ran from 9am to midnight nearly every day. I’m still grinning. Eleven solid days spent with the EAG team was by far the most intense and immersive training experience I have participated in to date. Will I be serving an arrest warrant to a felon hiding out in a light industrial factory at 2am any time soon? No. Will I better know how to safely maneuver through my own home, identify threats, engage or take control of a situation should something go bump in the night? Yes. Though the context of where these skills, techniques and procedures may vary from my classmates the real world application of them is fundamentally the same. Arguably the most valuable eleven days spent down range in the past 2.5 years in the industry. And yes, Pat, I’ll be back for more!

If you’re interested, 3 of the 4 instructors have DVDs you can buy via Panteao: John “Doc” Spears, Pat Rogers and John “Chappy” Chapman. You can find Steve Fisher in the Patterson-Gimlin film or at Sentinel Concepts. About the Author: Tatiana Whitlock is a mother of two, a firearms student (as we should all be), a firearms instructor and and entrepreneur. Her career made a dramatic direction change about 3 years ago when she departed the plastics manufacturing business to pursue her passion for firearms and personal protection. TW is an archery enthusiast, an NRA New Energy Spokeswoman, Refuse to be a Victim instructor, frequent RSO and committed Women on Target volunteer. She also may very well be the spriteliest GORUCK Challenge Academy grad ever> if you’re looking for something new to take to the range, check out her ID Target Systems. You can follow her on Facebook here.