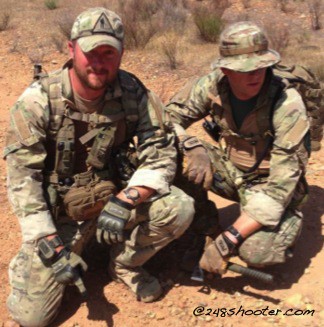 You can also visit their blog here: TTOS Blog

The focus of this writing is the importance of opening your mind and your thinking. Once you’re agreeable to doing so, triple the size of expansion and we’ll move forward. But, move forward in the thought process of a hunter who uses tracking as a means to hunt, but not the only means. Tracking is but one technique used in the overall process of hunting and the successful interdiction of the quarry.

I’ve been tracking since I was a barefooted boy, wearing nothing but a pair of shorts, armed with a .22 or 20 gauge, hunting in the foothills of the sierras. It continued throughout my military service (2nd Ranger) and law enforcement career. It’s now culminated in an expanded base of knowledge in not just tracking, but the hunting of man. Insert Hemmingway now. (I’m actually wearing a Go Loud Tactical Outfitters T-Shirt with the quote on the back as I type this). One more thing…I’m not a crazy person, by the way.

We are all students of the game. Some have more experience and expertise than others, but we can all learn at least one thing on each track. Sign and spoor can be found in a variety of ways and on a variety of natural and man-made environments. Is it fair to say that you’ll never see the exact same spoor or sign twice? Yep, it’s that random and you have to open your mind. This is why you cannot master tracking to the expert level. There are too many variables.

Step by step tracking is slow. Combat, tactical or “macro” tracking is not as slow, but still slower than the quarry can move in the same environment he’s being tracked in, unless it’s miles of tall grass or firm sand or even an inch or two of snow. At that point, team on quarry, it comes down to who can suffer the longest. Combat tracking is for those who can run 10 plus miles in full gear.

Optimally, you do not start a tactical or combat track that you cannot control. What does that mean? It means that you need to hunt in packs, not as single teams. I often point out the obscene amount of animal sign and spoor that we see as we’re training. The one thing we don’t see are the animals themselves. I tell the students that when they start to see the animals (deer, rabbits, fox, coyote, etc) then they are hunting right. Why is party hunting illegal in many states? It’s because it works too well.

As the quarry during field exercises in training, I can tell if the teams have gotten on track, if the controller or overall commander has profiled the terrain and closed down the high-speed lines of egress and natural lines of drift. The way I know that we’re within their grasp is when I see wildlife on the run, passing us up. As a big- picture trainer, this makes me feel like I’ve succeeded. It also tells me that I have a team on the move and their collective direction of travel, based on the direction of flight of the big game animals. It’s something you have to see. You feel absorbed in the clutch of a pursuing force.

The caveat to all of that, as the quarry, is that you can’t achieve that in a straight line. You as the one being hunted has to profile the terrain, take advantage of your time-distance-gap and put terrain features between you and the pursuing team. That’s what I’d really do if I was on the run. I’d put a terrain feature between myself and the hunter and take high- ground. As they take the ridge between us, I’m off to the next. That’s what big cats do when you hunt them. They are always the hunter and not the hunted.

Alright, enough of the contrast between being the hunter and the hunted, let’s talk about how to get it done.

The role of the tracking team, in a big picture sense, as in law enforcement or military, is to positively identify the tracks connected to the acts under investigation, to pursue, apply pressure, and as a unit interdict the quarry. This means that the tracking team may never come into contact with the quarry. It means that their job is to get into the mind of the quarry, profile him, determine his preference of flight, bring blocking forces to bear along with two man teams that know how to glass and control a large space with optics and ballistics. This may necessitate bold movements of teams along the likely line of flight, well outside the time-distance-gap. Combat and tactical tracking is a team sport. The tracking team is a small part of the larger force or team.

On a side note, and something I always impart during training, all organizations share common traits in order to be effective. They need to have a common goal or plan, hierarchy of command, lines of communication, protocols and procedures, division of labor and coordination of work effort. A tracking team is a small section of a larger force, team or organization. It needs to have the foundation as such. All those things are needed and trained in accordance with the thought process and overall action plans.

The point to all of this is that it takes a lot of teamwork and leadership to make a successful interdiction based on P3I (positive ID, pressure, pursuit and interdiction) to occur. The foundations have to be in place. The backbone of tracking operations were described in the statements of the common traits of organizations.

From there, effective training can take place, including the transfer of the big picture knowledge base, while using combat and tactical tracking operations as the vehicle to learn manhunting. Take the “macro” tracking concept and enlarge it tenfold. That is where you’ll find manhunting. On a smaller scale though, such as visual tracking in combat, small scale micro and even macro tracking is effective in detecting IED’s. This is the

Israeli model that we teach US forces in our Combat Tracker and Counter IED courses. That concept and subject is suited for another article to come later…maybe.

So let’s start to wrap it up.
Teaching a person to track another is not all that complicated; it’s everything else that goes with it that is. Team work, communication, knowing how to profile terrain, land navigation, use of specialized equipment, tactics and weapons, all of these things need to be deeply programmed in training and become totally subconscious during the act of tracking and manhunting as a team. This is the difficult part.

Sign cutting? That just a bigger, lost spoor procedure and not much more than that. Think it out while you’re tracking it out. That’s what the game is all about.

I don’t have much more to say right now. I promised the purveyor of this fine association a few paragraphs about tracking and some pictures to go along with and I think I accomplished that. The bigger thing I want to accomplish is the expansion of your understanding of tracking as just part of the means to manhunt, the use of P3I (designed by TTOS) and the collective effort that goes into successful operations. It all starts with proper training in context to the missions to follow.

One more little aside: I’ve tracked with K9 handlers before going through TTOS training and after. The difference is phenomenal. A K9 handler that is trained in the art and science of visual tracking, along with his partner’s abilities, is a serious force to be reckoned with, on small scale tracks that is. They definitely get it done.

We’ve done a large study on K9’s used in combat and tactical tracking teams and I may throw those findings and subsequent TTP’s into an article to follow.

The writer’s full bio can be found here: http://www.spirco.us/About-Us.html. The writer is also the president of SPIR International. Tactical Hemorrhage Control and combat life saving techniques are another one of the skill-sets that need to be subconsciously programmed in training so they can be replicated with success during the worst case scenarios. Operational success is built on adequate and proper planning, including contingency planning. That may have to be a third article.