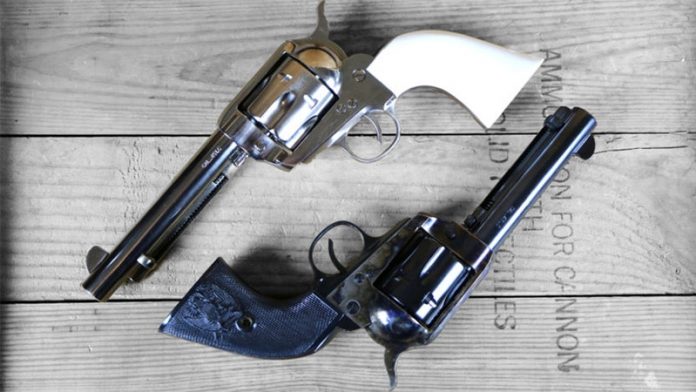 The secret is out, shooters are looking for new challenges and more fun at the range.  The challenge remains however in finding the right gun.  1873 Colt-styled Single-Action Army revolvers are loads of fun.  Booming out 200-255 grain projectiles with the squeeze of a crisp trigger after the musical clicks of cocking the hammer.  Traditions Firearms offers a variant with a few modifications.  The Frontier line can actually be safely loaded to six rounds because they have changed the action.  A small bar lifts up to protect the firing pin from being stuck should the gun be dropped.  If you’re not familiar with traditional 1873s they are typically loaded to just five rounds so the hammer can rest on an empty cylinder.  For an up close look:

That modification to the classic design makes the gun a bit safer for those experimenting with the 1873 style of handgun.  Their street price of around $400 also makes them a bit easier on the wallet than other models.  Don’t worry about the cost of .45 Colt, they are available in other calibers and even with .45 Colt the slow loading and unloading process ensures that a single box of ammo is more than enough for most trips to the range.  Range Impressions of another Traditions Frontier model can be seen here:

We found them to be quite enjoyable and although not 100% true to the original design, nor are the lighbulbs in our house!  If you’d like to explore other options with the Traditions Frontier line check out Traditions’ website here