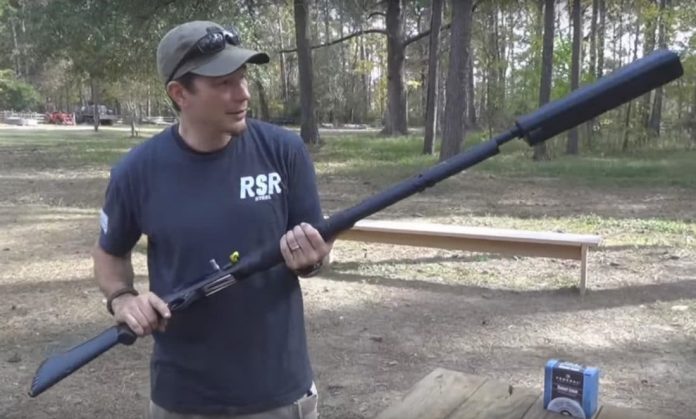 Ellermann runs a SilencerCo Salvo shotgun suppressor while he sits quietly on the back of his mare Dolly– sans saddle– to see if she’ll spook.

The Salvo uses a clever system of internal guide rods that channel the shot to the end of the suppressor, preventing the cup or wad from getting caught in the baffle stack. This is not a simple device. It is completely modular and can be broken down by section, and re-configured with some or all of the baffles to assemble a short, light suppressor or a more noise-reducing, longer and heavier suppressor.

The rear cap is designed to attach onto threaded choke adapters, and SilencerCo makes adapters for Remington and Mossberg shotguns as well as Benelli, Browning, FN America and Weatherby shotguns.

Ellermann goes more in-depth on one below in his review of the suppressor, but in the above video, it seems to be Dolly-approved.

Though watch out for falling pellets if you hang out around his barn.